Devonian Botanical Garden
This article is about the botanical garden near Devon Alberta Canada. For an unaffiliated indoor park in Calgary, see Devonian Gardens (Calgary). 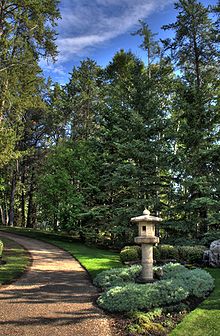 A lamp and forest path in the Japanese garden 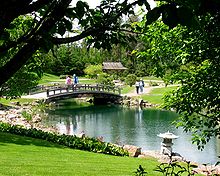 Water feature and bridge in the Japanese garden

The Devonian Botanic Garden is Canada's most northerly botanical garden. It was established in 1959 by the University of Alberta, and is located near the town of Devon, Alberta. The gardens extend over 30 hectares (80 acres) of 12,000 year old sand dune shoreline of pre-glacial Lake Edmonton, and include an additional 40 hA (110 acres) of natural areas. In 1976 a further 40 hA were added and the name was changed to the Devonian Botanic Garden. It contains a diverse variety of plants, with emphasis on alpine and cold-hardy plants, but featuring such attractions as an authentic Japanese garden. Because of its connection to the University of Alberta, extensive research is carried out by the centres staff in areas including bryophyte ecology and biodiversity, plant conservation,and taxonomy of microfungi. A fully digitized herbarium contains a large collection of bryophyte specimens that is used for research and teaching, as well as horticultural plant grown at the garden.

The Garden offers several display features: an alpine garden, an herb garden, a peony collection, a primula dell, an iris dell, a collection of Alberta plants, a Native People's garden, a Japanese garden, and a Heritage Plants garden. The Garden is open from May through October.

The Friends of the Devonian Botanic Garden was founded in 1971 as a fundraising group to support the aims and objectives of the garden. The Friends maintain a Members Seed List and also produces various horticulturally related publications.