SsangYong was acquired by India's Mahindra & Mahindra Limited in February 2011,[2] after being named the preferred bidder in 2010 to acquire the bankruptcy-protected company.[3] Mahindra's acquisition was approved by South Korea's Free Trade Commission.[4]

In 1964, Hadonghwan Motor Company started building jeeps for the US Army as well as trucks and buses. Beginning in 1976, Hadonghwan produced a variety of special purpose vehicles. After changing its name to Dong-A Motor in 1977, it was taken over by Ssangyong Business Group in 1986 and changed its name to SsangYong Motor.[6] In 1987, it acquired United Kingdom-based specialty car maker Panther Westwinds.[6]

The Musso was a result of collaboration between SsangYong and Daimler-Benz.

In 1991 it started a technology partnership with Daimler-Benz. The deal was for SsangYong to develop an SUV with Mercedes-Benz technology. This was supposedly to allow SsangYong to gain footholds in new markets without having to build their own infrastructure (utilizing existing Mercedes-Benz networks) while giving Mercedes a competitor in the then-booming SUV market.[7] This resulted in the SsangYong Musso, which was sold first by Mercedes-Benz and later by SsangYong.[8]

SsangYong further benefited from this alliance, long after Daimler-Benz stopped selling the Musso, producing a badge engineered version of the Mercedes-Benz MB100, the Istana and using Daimler designs in many other models, including the second-generation Korando (engine and transmission), the Rexton (transmission)[9], the Chairman H (chassis and transmission)[10] and the Kyron (transmission).[11]

In 1997 Daewoo Motors bought a controlling stake from the Ssangyong Group, only to sell it off again in 2000, because the conglomerate ran into deep financial troubles. In late 2004, the Chinese automobile manufacturer SAIC took a 51% stake of SsangYong Motor Company. 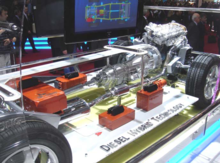 In January 2009, after recording a $75.42 million loss, the company was put into receivership. This may have been due to the global economic crisis and shrinking demand.[12] On August 14, 2009, worker strikes finished at the SsangYong factory and production commenced again after 77 days of disruption.[13] Company employees and analysts have also blamed SAIC for stealing technology related to hybrid vehicles from the company and failing to live up to its promise of continued investment.[14][15] SAIC denied allegations of technology theft by the company's employees.[16] However, SAIC was charged by the South Korean prosecutor's office for violating company regulations and the South Korean law when it ordered and carried out the transfer of Ssangyong's proprietary technology developed with South Korean government funding over to SAIC researchers.[17]

In 2010, Daewoo Motor Sales was dropped by General Motors. The long-time dealership partner then signed a deal with the SsangYong Motor Company to supply new vehicles to sell (specifically the Rodius, Chairman W and Chairman H), in return for the injection of 20 billion won ($17.6 million) into the car maker still recovering from bankruptcy. The deal is non-exclusive, meaning SsangYong will also sell vehicles through private dealers.[18]

In April 2010, the company released a statement citing interest of three to four local and foreign companies in acquiring SsangYong Motor Company, resulting in shares rising by 15%.[19] The companies were later revealed to be Mahindra & Mahindra Limited and the Ruia Group of India and SM Aluminum, Seoul Investments and Renault Samsung of South Korea.[20][21] In August 2010, Mahindra & Mahindra Limited was chosen as the preferred bidder for SsangYong.[22] The acquisition was completed in February 2011[2][23] and cost Mahindra 522.5 Billion Won.[24]