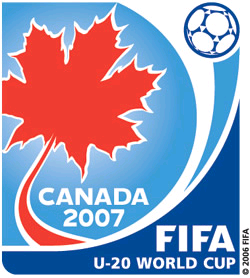 The 2007 FIFA U-20 World Cup was the sixteenth edition of the (formerly called FIFA World Youth Championship), hosted by from to , . Argentina defeated Czech Republic in the title game by the score of 2–1, thus managing a back-to-back world title, its fifth in the past seven editions, and sixth overall. player was given the FIFA U-20 Golden Shoe (top scorer with 6 goals) and the FIFA U-20 Golden Ball (best player of the tournament), while Japan earned the FIFA Fair Play Award.

The tournament featured 24 teams coming from six continental confederations; Canada qualified automatically as hosts, while the remaining teams qualified based on their rankings at the respective continental U-20 (U-19 in Europe's case) tournaments. (Europe) qualified six teams; AFC (Asia), CAF (Africa), (North, Central America & Caribbean) and (South America) four teams each; and OFC (Oceania) one team.

The tournament took place in a variety of venues across the country — , Edmonton, , , Victoria, and () — with the showcase stadium being Toronto's new National Soccer Stadium ["National Soccer Stadium" was the temporary name of the during this tournament, as FIFA prohibits sponsorship of stadia unless the stadium sponsor is also an official FIFA sponsor.] where the final match was held.

On , , two days before the inaugural match, it was reported that 950,000 tickets had been sold, [cite web |url=http://www.canadasoccer.com/eng/media/viewArtical.asp?Press_ID=2755 |title=FIFA U-20 World Cup surpasses 950,000 spectators |publisher=CanadaSoccer.com |date= |accessdate=2007-07-01] making it the largest single-sport event ever taking place in the country, [cite web |url=http://www.fifa.com/u20worldcup/organisation/media/newsid=112480.html#history+made+with+canada+2007+ticket+sales |title=History made with Canada 2007 ticket sales |publisher= |date= |accessdate=2007-07-01] and on , the tournament organisers sold the one millionth ticket. [cite web
url=http://www.fifa.com/u20worldcup/news/newsid=543909.html#fast+starts+mexico+portugal |title=Fast starts for Mexico, Portugal |publisher=FIFA.com |date=
accessdate=2007-07-04] On , the semifinal match between Chile and Argentina marked this edition as the most attended in the tournament's history, with an accumulated attendance of 1,156,187 spectators, surpassing Mexico 1983's 1,155,160 spectators.

The best four third-placed teams also advance to the knockout stage. The final standings are shown below.

The Chile-Nigeria quarter-final match took place on FIFA's "Say No To Racism Day". During extra time, Chile's scored at the 96th minute. The Nigerians argued that it was offside, though referee allowed the goal to stand. Replays showed that a defender was caught out of place on an offside trap. Keeper was shown the yellow card for his protest. [http://www.cbc.ca/sports/fifau20/blog-howard/2007/07/dont_blame_the_ref.html] [http://www.cbc.ca/sports/fifau20/story/2007/07/17/nigeriancoach-ref.html]

At a post-game news conference, Nigerian coach said "What happened on the pitch, the officiating, I think FIFA has a long way to go to beat racism, because that official showed racism." When asked if he felt Webb was a racist, Bosso said only that "It's good for FIFA to bring in the fight against racism, but they have to follow it to the letter, so the implementation will be done." [http://www.cbc.ca/sports/fifau20/story/2007/07/17/nigeriancoach-ref.html] The coach was fined CHF 11,000 and banned for four months, as the disciplinary committee found him guilty of "offensive behaviour" under the terms of article 57 of the FIFA Disciplinary Code [http://www.fifa.com/u20worldcup/organisation/media/newsid=571192.html]

The Nigerian FA was also sanctioned for allowing the players to wear t-shirts with religious statements under their game jerseys. This was a clear violation of the regulations of the tournament that state "Players and officials are not allowed to display political, religious, commercial or personal messages in any language or form on their playing or team kits ..." [http://www.cbc.ca/sports/fifau20/blog-howard/2007/07/dont_blame_the_ref.html]

On , , there was a very controversial semifinal match between and . Referee was criticized by the Chilean players for his officiating, having "lost control of the match early" [ [http://www.thestar.com/Sports/article/238024 TheStar.com | Sports | Beautiful game turns ugly ] ] and for issuing seven s (out of nine) and two s against the Chilean team during the match [ [http://www.fifa.com/u20worldcup/matches/round=249411/match=58893/statistics.html FIFA.com ] ] . In total he issued 53 fouls, 30 of which he charged to Chile. [http://sportsillustrated.cnn.com/2007/soccer/07/20/bc.soc.u20.chilefight.ap/index.html] and 23 to Argentina.

Chilean striker Nicolás Medina hinted that he felt that the referee was favoring the Argentine team, stating that "Eleven against eleven, the game would have been much more fair."

Following the match, Stark and his colleagues were surrounded by livid Chilean players who were restrained by members of the . Stark then had to be escorted off of the pitch and into the dressing room tunnel by police officers for fear that he would be attacked by the crowd and/or Chilean players at the National Soccer Stadium.

Afterwards, several players and delegates of the Chilean team were involved in a brawl with police outside 's National Soccer Stadium, [ [Reuters: "Chile soccer players clash with Toronto police"; July 20, 2007] ] which ended with several Chileans injured, then handcuffed and detained inside the stadium. How the events unfolded is not unanimous, with two currently existing versions.

According to the Chilean players and some witnesses, at 10:22 p.m. (local time) Chilean player — before getting on the team bus — walked towards a crowd of Chilean fans stationed behind a security fence some 50 metres away from the bus, but was stopped by about ten policemen some 30 metres away from the fence. A heated discussion took place, where Peralta (who speaks no English) was verbally and physically abused by the policemen. Peralta was ed by one police officer and he lost consciousness for 20 minutes. Chilean player arrived at the scene to help his team mate and got involved in a struggle with the police. Other eyewitnesses stated it was Chilean goalkeeper who walked towards the fans when he was grabbed by a security guard, prompting the melee. [ [http://www.thestar.com/Sports/article/239050 Campbell, Morgan; "Toronto Star": CSA seeking witnesses to Chile brawl; July 24, 2007] ] This was noticed by the other players inside the bus, who also got involved in the struggle with the police. All players — except Peralta, who lay unconscious on the ground — got back on the bus and closed the doors to keep the police out. A policewoman noticed this and threw a canister (or something to that effect) inside the bus. The players panicked and started breaking windows to let air in. Three minutes later the president of the Chilean National Association of Professional Football (ANFP), , asked the players to descend from the bus to take a different one. As the players were getting off the bus they were violently detained by police; some players were even handcuffed. — who was coming out of the test — heard some people screaming and arrived at the scene, but was also beaten by police. The police then took the players back to the stadium. Christian Suárez &ndash; arriving from the mixed zone &ndash; was also detained.

The police version of the events, as given by Toronto Police Chief Bill Blair, claimed that the melee began when Chilean players got into a scuffle with a rival fan.

Eyewitness accounts stated that the altercation began as the Chilean players were heading to their bus, across the driveway from the doors of the stadium. There was apparently yelling near the bus, and then a scuffle erupted. Nathan Denette, a reported for stated: "Next thing you know, the bus just unloads and there's eight, 10 players come off the bus and there's just fists flying everywhere, between the cops, the security guards, a couple of ladies were involved that were security." As the conflict became more heated, a police officer did use a Taser &ndash; though it was unclear if it was used on a player or an official with the Chilean team &ndash; after which the brawl became even more intense. It was also asserted that any bruises sustained by anyone involved were "tiny." [ [Warmington, Joe; "Toronto Sun": Chileans' conduct shameful; July 23, 2007] ]

The Chilean press alleged that all press were removed from the area by security personnel since the incident's start, threatened with the removal of their tapes if they recorded anything and locked inside a room for several minutes. [" [http://impreso.elmercurio.com/_portada/index.asp El Mercurio] " edition]

Ten Chilean team members were detained over three hours and then released without charges.

In Chile the incident was on the front page of every major newspaper. The Canadian embassy in Santiago received a bomb threat and angry Chileans protested outside the embassy with signs reading "Racist Canada." [" [http://www.thestar.com/News/article/238415 Toronto melee a global dust-up] ", thestar.com, accessed ] Chile's President, , said that the incident was "especially serious because, in our opinion, the Chilean delegation suffered unjustified aggression,"

It was reported in the Canadian media on July 30, 2007, that Isaias Peralta had confessed to Santiago's "" that one of the Chilean team members had punched a female police office in the face before Peralta had been tasered, but maintained that the Toronto police had assaulted the Chilean team members before they retaliated; the following day Peralta denied making the comments.

Harold Mayne-Nicholls, chair of the Football Federation of Chile and a witness to the event said: "I didn't see any Chilean player hitting any officer except between all the struggling." Patricio Bascunan, president of the Salvador Allende Cultural Society of Toronto, said an independent review was needed.

Chile's was suspended for nine months at all levels (domestic and international) and fined CHF 7,000 (including procedural costs) for assaulting match officials. The Chilean football association was fined CHF 15,000 for "team misconduct". [http://www.fifa.com/u20worldcup/organisation/media/newsid=571192.html]