The National Association of College and University Residence Halls Incorporated (NACURH) is an international organization made up of eight regions. The eight regions cover the entire United States, Canada, parts of Mexico, Qatar, and Australia. NACURH is the largest student-run organization in the world, and brings together students who live in residence halls on college campuses to share ideas, resources, and best practices in order to improve their residential communities.

NACURH Services and Recognition Office
The NACURH Services and Recognition Office (NSRO) is the services office of NACURH, Inc. and serves as a support office for NACURH. The NSRO was created to provide non-technical services to NACURH and its member schools. Currently hosted by the University of Wisconsin Stout, the NSRO is charged with creating and selling merchandise (pins, apparel, etc.) and creating and maintaining special national projects and developing other services for NACURH, Inc. as needed. 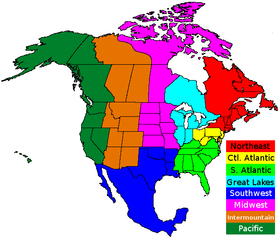 The Central Atlantic Affiliate of College and University Residence Halls is made up of Delaware, Maryland, New Jersey, Ohio, Pennsylvania, Qatar, Washington D.C., and West Virginia. Prior to 1990 this region was part of NAACURH.

The Great Lakes Affiliate of College and University Residence Halls is made up of Illinois, Indiana, Michigan, Wisconsin, and Ontario, Canada. It was broken off from MACURH in 1968.

The Intermountain Affiliate of College and University Residence Halls is made up of Arizona, Colorado, Idaho, Montana, New Mexico, Utah, Wyoming, Alberta, Canada, Saskatchewan, Canada. IACURH was formed from the Inter-Mountain Residence Hall Association, which joined NACURH (then ACURH) in 1961.

The Midwest Affiliate of College and University Residence Halls is composed of Iowa, Kansas, Minnesota, Missouri, Nebraska, North Dakota, South Dakota, and Manitoba. MACURH was formed from the original Midwest Dormitory Conference, which led to the formation of NACURH.

The North East Affiliate of College and University Residence Halls is made up of Connecticut, Maine, Massachusetts, New Hampshire, New York, Rhode Island, Vermont, Newfoundland, New Brunswick, Nova Scotia, Prince Edward Island, and Quebec. Prior to 1990, this area was part of NAACURH.

The Pacific Affiliate of College and University Residence Halls is made up of Alaska, California, Hawaii, Nevada, Oregon, Washington, British Columbia, Yukon and Australia. It was formed in 1964.

The South Atlantic Affiliate of College and University Residence Halls is composed of Alabama, Florida, Georgia, Kentucky, Mississippi, North and South Carolina, Tennessee, and Virginia. It was formed in 1964.

The Southwest Affiliate of College and University Residence Halls is made up of schools in Arkansas, Louisiana, Oklahoma, Texas, and Mexico. It was broken off from MACURH as its own region in 1980. 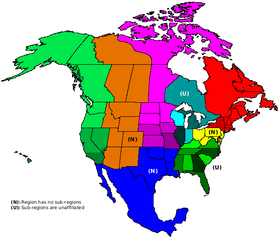 Many regions have formed sub-regions with varying levels of officiality. Some of these sub-regions are informal, while others hold their own additional "Sub-Regionals" conferences. In some cases, sub-regions are limited to one state.

MACURH does not have sub-regions. However, it used to have three subregions, each of which were officially recognized by MACURH and had their own Regional Communications Coordinator from the region. The North was composed of Manitoba, Minnesota, South Dakota and North Dakota. The Central subregion was composed of Iowa, Kansas, and Nebraska. The South subregion was Missouri. This change occurred in 2009 during an attempt to unify the region.

NEACURH's subregions are New York and New England and both have RCCs associated with those geographic areas.

PACURH is split into Northern, Central, and Southern sub-regions. The latter two split through California and Nevada at the 35 degree latitude line.

GLACURH does not have organized sub-regions, although it dedicates one regional coordinator to each state and province. Some states and Ontario have formed independent state associations, similar to the situation in SAACURH. These state/province associations are known as MORHA, ORHA, WURHA, IRHA, and IRHO.

SWACURH has three subregions- Arkansas/Louisiana, Oklahoma, and Texas/Mexico. However, rather than having sub-regional RCCs, SWACURH has RCCs based on topic areas.

IACURH passed legislation in 2004 to dissolve their sub-regions and sub-regional RCCs (North - Saskatchewan, Alberta, Idaho, and Montana, Central - Utah, Colorado, and Wyoming, and South - Arizona and New Mexico) in favor of RCCs that served in support capacities for leadership positions (NCC, RHA Presidents) and recruitment/retention.

CAACURH does not have sub-regions or state associations, and divides their RCCs (along with IACURH) based on topic areas rather than sub-region or state.

Each year a school is selected to host the following year's national conference (also referred to as NACURH).

NACURH national conferences by total hosted in state, as of 2007; includes declared hosts for future conferences

A similar organization, the Inter-Mountain Residence Hall Association (IMRHA), merged with ACURH in 1961, adding the word "National" to the name of the organization (NACURH). The association was split into two "associate" regions, MACURH and IACURH, based on the two original groups, which became devolved in 1964. In that year, PACURH, SAACURH, and NAACURH were also created. GLACURH was split from MACURH in 1968, and SWACURH likewise in 1980. In 1990, NAACURH was wholly split into CAACURH and NEACURH.

NACURH incorporated as a non-profit under Oklahoma laws in 1971, granting non-profit incorporation to its associates, which became "affiliates" under the now NACURH, Inc. corporate umbrella. In 1997, the corporation and its Affiliates gained tax-exempt status.

NACURH, Inc. is the largest student run corporation in the world.[citation needed]

Some regions have regional mascots, which make frequent appearances on T-shirts at national conferences and elsewhere.

The National Offices also have mascots.

In January, 1982, the NACURH National Board of Directors (NBD) approved a resolution authorizing a NACURH alumni association. This brochure was designed to introduce the "Association of Alumni and Friends of NACURH" to the general membership.