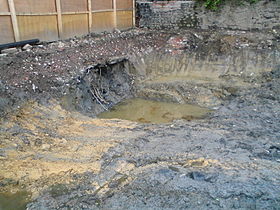 Soil contamination or soil pollution is caused by the presence of xenobiotic (human-made) chemicals or other alteration in the natural soil environment.

This type of contamination typically arises from the rupture of underground storage tanks, application of pesticides, percolation of contaminated surface water to subsurface strata, oil and fuel dumping, leaching of wastes from landfills or direct discharge of industrial wastes to the soil. The most common chemicals involved are petroleum hydrocarbons, solvents, pesticides, lead and other heavy metals. This occurrence of this phenomenon is correlated with the degree of industrialization and intensities of chemical usage.

The concern over soil contamination stems primarily from health risks, from direct contact with the contaminated soil, vapors from the contaminants, and from secondary contamination of water supplies within and underlying the soil[1]. Mapping of contaminated soil sites and the resulting cleanup are time consuming and expensive tasks, requiring extensive amounts of geology, hydrology, chemistry, computer modeling skills, and GIS in Environmental Contamination.

It is in North America and Western Europe that the extent of contaminated land is most well known, with many of countries in these areas having a legal framework to identify and deal with this environmental problem; this however may well be just the tip of the iceberg with developing countries very likely to be the next generation of new soil contamination cases.

The immense and sustained growth of the People's Republic of China since the 1970s has exacted a price from the land in increased soil pollution. The State Environmental Protection Administration believes it to be a threat to the environment, to food safety and to sustainable agriculture. According to a scientific sampling,150 million mi (100,000 square kilometers) of China’s cultivated land have been polluted, with contaminated water being used to irrigate a further 32.5 million mi (21,670 square kilometers) and another 2 million mi (1,300 square kilometers) covered or destroyed by solid waste. In total, the area accounts for one-tenth of China’s cultivatable land, and is mostly in economically developed areas. An estimated 12 million tonnes of grain are contaminated by heavy metals every year, causing direct losses of 20 billion yuan (US$2.57 billion).[2]

This type of contamination or pollution typically arises from the rupture of underground storage tanks, application of pesticides, percolation of contaminated surface water to subsurface strata, oil and fuel dumping, leaching of wastes from landfills or direct discharge of industrial wastes to the soil. The most common chemicals involved are petroleum hydrocarbons, solvents, pesticides, lead and other heavy metals. This occurrence of this phenomenon is correlated with the degree of industrialization and intensities of chemical usage.

Treated sewage sludge, known in the industry as biosolids, has become controversial as a fertilizer to the land. As it is the byproduct of sewage treatment, it generally contains contaminants such as organisms, pesticides, and heavy metals than other soil.[3]

Contaminated or polluted soil directly affects human health through direct contact with soil or via inhalation of soil contaminants which have vaporized; potentially greater threats are posed by the infiltration of soil contamination into groundwater aquifers used for human consumption, sometimes in areas apparently far removed from any apparent source of above ground contamination.

Health consequences from exposure to soil contamination vary greatly depending on pollutant type, pathway of attack and vulnerability of the exposed population. Chronic exposure to chromium, lead and other metals, petroleum, solvents, and many pesticide and herbicide formulations can be carcinogenic, can cause congenital disorders, or can cause other chronic health conditions. Industrial or man-made concentrations of naturally-occurring substances, such as nitrate and ammonia associated with livestock manure from agricultural operations, have also been identified as health hazards in soil and groundwater.[4]

Chronic exposure to benzene at sufficient concentrations is known to be associated with higher incidence of leukemia. Mercury and cyclodienes are known to induce higher incidences of kidney damage, some irreversible. PCBs and cyclodienes are linked to liver toxicity. Organophosphates and carbamates can induce a chain of responses leading to neuromuscular blockage. Many chlorinated solvents induce liver changes, kidney changes and depression of the central nervous system. There is an entire spectrum of further health effects such as headache, nausea, fatigue, eye irritation and skin rash for the above cited and other chemicals. At sufficient dosages a large number of soil contaminants can cause death by exposure via direct contact, inhalation or ingestion of contaminants in groundwater contaminated through soil. [5]

Not unexpectedly, soil contaminants can have significant deleterious consequences for ecosystems[6]. There are radical soil chemistry changes which can arise from the presence of many hazardous chemicals even at low concentration of the contaminant species. These changes can manifest in the alteration of metabolism of endemic microorganisms and arthropods resident in a given soil environment. The result can be virtual eradication of some of the primary food chain, which in turn could have major consequences for predator or consumer species. Even if the chemical effect on lower life forms is small, the lower pyramid levels of the food chain may ingest alien chemicals, which normally become more concentrated for each consuming rung of the food chain. Many of these effects are now well known, such as the concentration of persistent DDT materials for avian consumers, leading to weakening of egg shells, increased chick mortality and potential extinction of species.

Effects occur to agricultural lands which have certain types of soil contamination. Contaminants typically alter plant metabolism, most commonly to reduce crop yields. This has a secondary effect upon soil conservation, since the languishing crops cannot shield the Earth's soil mantle from erosion phenomena. Some of these chemical contaminants have long half-lives and in other cases derivative chemicals are formed from decay of primary soil contaminants.

Microbes can be used in soil cleanup