Ampthill is a small town and civil parish in Bedfordshire, England, between Bedford and Luton, with a population of about 6,000. It is administered by Central Bedfordshire Council. A regular market has taken place on Thursdays for centuries.

The name 'Ampthill' is of Anglo-Saxon origin. The first settlement was called 'Aemethyll', which literally means either 'ant-heap' or 'ant infested hill'. In the Domesday Book, Ampthill is referred to as 'Ammetelle', with the landholder in 1086 being Nigel de la Vast.

In 1242, King Henry III confirmed the right to hold a market on Thursdays. These continue more than 750 years later.

Henry VIII was a frequent visitor to Ampthill Castle, and it was there that Katherine of Aragon lived from 1531 until divorced in 1533, when she was moved to Kimbolton. The castle was built in the 15C by Sir John Cornwall, later Lord Fanhope, from ransoms after the Battle of Agincourt. Although the Castle is now gone, some intriguing indications of castle life remain- such as the local ponds (Westminster pond being one) allegedly built to supply the castle with regular supplies of fish.

The church of St Andrew ranges in date from Early English to Perpendicular. It contains a monument to Richard Nicolls (1624–1672), an Ampthill native, who, under the patronage of the Duke of York, brother to Charles II, to whom the king had granted the Dutch North American colony of New Netherland, received the submission of its chief town, New Amsterdam, in 1664, and became its first English governor, the town taking the name of New York.[2] Nicolls perished in the action between the English and Dutch fleets at Solebay, and the ball which killed him is preserved on his tomb. The church also contains a ring of eight bells. There were six until 1981, when the two new bells were installed. Services Run weekly, with Sung Eucharist at 9.30AM and Evensong at 6.30PM. The church has a regular 4 part choir, which has sung morning and evening services for over 100 years. 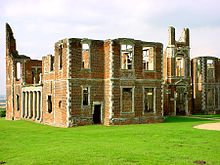 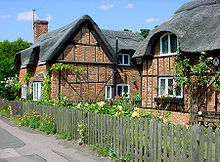 Houghton House was built in 1621 by Mary, Countess of Pembroke and sister of the poet Sir Philip Sidney. In 1675, the house provided the inspiration for 'House Beautiful' in John Bunyan's The Pilgrim's Progress. Bunyan's work is loosely based on his own journey between Bedford and Luton, and the steep slope leading into Ampthill was the model for the 'Hill of Difficulty'. Houghton House passed to the Duke of Bedford in 1738 and became a ruin after the removal of the roof in 1794.

In the mid-1780s, John Fitzpatrick, the 2nd Earl of Upper Ossory, led a campaign to improve the town centre. He created the current market place, erected the water pump and built a new clock tower. Lord Upper Ossory was also responsible for a cross commemorating Katherine of Aragon, with an inscription by Horace Walpole, and a row of thatched cottages built between 1812 and 1816 to house his estate workers.

On the death of Lord Upper Ossory in 1818, Ampthill Park became the seat of Lord Holland in whose time Holland House in Kensington, London, became famous as a gathering place for intellectuals.

Notable 20th century architect Sir Albert Richardson lived in Ampthill from 1919 until his death in 1964 at Avenue House, 20 Church Street. Among his last projects was the building that housed Mid Bedfordshire District Council (formerly the Ampthill Rural District Council offices) until August 2006, at 12 Dunstable Street (1963–1965).

Ampthill Park was the burial place for the golden hare in the Kit Williams treasure hunt Masquerade.

During WWII there was a farming camp near Ampthill where volunteers recovered sugarbeet and were accommodated in tents in the grounds of a nearby country mansion.

Ampthill still trades on its "historic market town" reputation, serving as a commercial centre for surrounding villages. The town has several lively pubs, a wide variety of restaurants, a Waitrose supermarket and a selection of small independent specialist shops below flats. A number of small businesses such as solicitors, estate agents, financial services, hairdressers, music schools and a bookshop are also located in town, with larger businesses to be found on the commercial and industrial developments on the outskirts, along the town's bypass. Ampthill also has a high concentration of public amenities, including schools, doctors surgeries, fire and ambulance stations, and a police station.

Ampthill's historic centre, coupled with well-respected schools and the facilities mentioned above has made it one of the most expensive places to buy a house in Bedfordshire, even in comparison to other mid-Bedfordshire towns such as neighbouring Flitwick, and Cranfield. In a survey,[3] it was found that the majority of Ampthill's workers are employed locally, with around 20% working in Ampthill itself, and most of the remainder travelling to nearby centres of employment such as Bedford, Luton and Milton Keynes. It is possible to commute from Ampthill to London, and around 13% of workers make this journey daily. The survey also found that the turnover of residents was low, most having been in Ampthill for well over a decade.

Ampthill gained national media attention on 21 October 2007 after Bedfordshire Fire Service declined to take down festival bunting due to health and safety fears, breaking a 20 year tradition.[4] The source of the story was a discussion on the town forum that was covered on the front page of the local Bedfordshire on Sunday newspaper, before being picked up by national newspapers and television news.

Ampthill Is Twinned With Nissan-Lez-Enserune In France

Westminster Pond, a great place for fishing and jogging, located on the outskirts of Ampthill, has been rumoured to be cursed and/or haunted by a variety of paranormal activity. Villagers report seeing faint white lights 'wandering' around the wood then mysteriously disappearing into thin air. Stories and tales say of the place to be built around a historic 'prison' used to give local criminals a place to stay/sleep before being taken off to London for their prosecution. It was also said to be used as a 'camp' for victims of the plague, where which many suffered and died. Though there have been rumours of murders, burials, rituals/sacrifices and of course the village tales of the prisons, plagued camps and paranormal activities, nothing yet has been proven.

Recent years have witnessed substantial development in Ampthill and the surrounding area. The Bedford Street area was substantially redeveloped in 2006/2007, with the demolition of a Shell petrol station, shopping arcade and small Budgens supermarket, to make way for a new Waitrose supermarket, an improved town car park and a development of shops and apartments known as Oxlet House. The supermarket opened on 29 September 2006, with Oxlet house being completed in late 2007.

The surrounding area will see two major new developments over the next couple of years. Firstly, NIRAH[5] - the National Institute for Research into Aquatic Habitats - will be constructed in one of the old brick pits at nearby Stewartby, just North of Ampthill. The Stewartby brickworks ceased production in February 2008, putting an end to sulphurous smells which affected Marston Vale, and occasionally reached Ampthill and as far as Greenfield. Secondly, a new Center Parcs site will be constructed at Warren Wood to the West of Ampthill and should be completed by 2013.[6]

The Bedfordshire Railway & Transport Association is campaigning for the reopening of Ampthill railway station which closed in 1959.[7]