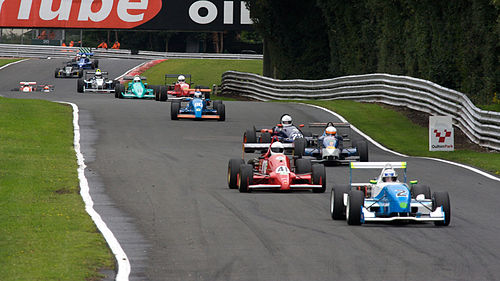 The Monoposto Racing Club is a single seater, open-wheeled motor racing club in the United Kingdom. Its members race a variety of single seater race cars ranging from 600cc Jedi's to 2000cc Formula Three and Formula Renault cars. Monoposto is Italian for 'Single Seater'. As of 2010, it is the largest single seater championship in the UK, with over 60 regular race entrants.

It has several classes of cars: 1000, 1400, 1600, 1800, Classic2000, and 2000; these are based primarily on the maximum permitted engine size, but also engine tuning freedom, chassis age and chassis materials. Most race meetings have the six classes spread over two grids, with the 1000 and 1400 cars on one, and the 2000 and Classic2000 cars on another. The 1600 and 1800 classes are alternated between the two, either together or independently, depending on the circuit and expected entry numbers.

Termed 'The Friendly Club', the Monoposto Racing Club encourages both novice and experienced drivers to take part - indeed, novice drivers are made especially welcome, and competitors are usually more than willing to lend a hand (or tools) in the paddock to make a repair or adjustment, or to simply give advice. This is summed up nicely in the club profile.

The Championship visits most major UK race tracks, including Silverstone, Brands Hatch, Snetterton, Donington Park, Oulton Park, Castle Combe, Pembrey and Rockingham. It used to have a non-championship event at Spa-Francorchamps but dwindling entries meant this has been cancelled. For 2010 and 2011 the Monoposto Racing Club have arranged a non-championship race at Spa via a French race organiser, and the MRC is not financially involved. In addition, there are several other non championship events in 2010, at Mallory and on the Silverstone GP circuit.

Points are scored for all finishers in their class order, with 15 for 1st place down to 1 for 12th are below. There is also a point for fastest lap in each class. The championship is decided from the best 10 scores from 14 or so rounds.

The Monoposto Racing Club has played a large role in the introduction of modern motorbike engined single seaters to UK race circuits. Approximately ten years ago the club regulations permitted motorcycle engined cars to race as part of the 1800cc class. At that time the 1000cc & 1400cc grid contained Jedi, re-engined chassis and even one of the Gordon Murray designed, road going, Rockets.

Introduced in the late 1960s the Formula Ford 1600 class has been one of the most successful classes in the history of the sport. These cars are still racing today, with thousands of chassis produced and literally years of development to produce safe, reliable racing cars with superb drivability. For several decades Formula Ford chassis have been raced in the MRC. The current Mono 1600 class has its origins in the old "Mono Kent" class, long the core of the club. This class used either Formula Ford engines or Formula Ford engines with a special cam. Today, Formula Fords are still the backbone of the class but while engines remain strictly controlled and therefore cheap and readily available, modifications to the chassis are permitted, such as wings, tyres from other formulae and different size wheels. Minimum weights are around 505 kg-525 kg, depending on the engine used, to equalise performance. The 1600s are the lowest powered cars in the club, but as thoroughbred single seaters they are by no means slow. There are few road cars below £60,000 that can keep up with a Mono 1600, and indeed most racing saloons struggle to equal our lap times.

A good case can be made for the Mono 1800 class being the best value class in the Monoposto Championship, this equates to some of the best value racing in the U.K. With 1800cc engines and a minimum weight of 535 kg a power:weight ratio of 250 hp/tonne is common, and makes the cars surprisingly quick. Given drivers of equal ability, a Mono 1800 is several seconds a lap faster than a Mono1600. Maintenance is limited to oil, brake & tyre changes & keeping the battery charged up, the fuel injection, with its pumps consumes a significant amount of electrical energy.

For the majority of the last ten years the Mono2000 class has been the 'blue riband' class in the MRC. The class can claim one of the premier positions in the UK club single seater scene. These cars provide slicks and wings racing with the economy and reliability of a production 2000cc, 16v engine, in a state of tune that would be familiar to those driving the majority of road going Caterhams and Westfields that use similar engines. Frequently the fastest cars in the club, this caters for cars mostly built between 1994 and 2004 with a 2000cc engine and a 560 kg weight limit. Power outputs are around 185-195 hp, giving a power:weight ratio of around 330 hp/tonne. Typically this class is dominated by Dallara F3 cars, usually with Vauxhall or Toyota engines running on carburettors as per the regulations rather than the original F3 injection and restrictor.

For 2010 the Monoposto Racing Club revised the regulations regarding fuelling, and have allowed the use of fuel injection via throttle bodies, with a maximum throttle diameter of 40mm per cylinder, through which all air must pass. This limit is intended to maintain parity with carburetted engines, so that those not able or not wanting to use injection can remain fully competitive.

There are also a number of other changes to increase the number of cars on the grid - the age limit is now 2004, and sequential gearboxes and aluminium blocks are also allowed. The Mono Formula 2000 class will also merge into Mono2000 (with cars now required to use a 25mm restrictor, rather tham 24mm in 2009), effectively allowing F3 spec cars to race in Monoposto with only minor changes to the cars. Variable valve control engines are banned, even if the mechanism is deactivated.

Formula Renault 2000 cars are allowed to race, but must be in BARC specification, using the 'Blue' 37mm restrictor. This ensures the cars have balanced engine outputs.

A new class for 2008 (although it was trialled in 2007), this class uses the same regulations as Mono2000 (although the 2010 changes allowing fuel injection have not passed down to the Classic class), but has an age limit to restrict it to the older cars - typically pre-1993 (although exceptions apply up to 1999 for some makes). In 2008 this was probably the largest class at any race meeting. Formula 3 cars or Formula Vauxhall Lotus chassis are the most popular and most competitive.

A trial class for 2009. This class allowed Formula Renault 2000 and Formula 3 spec cars (with smaller restrictors) to race on the same grid as the other two litre cars, but without upsetting the class balance until the competitiveness of the cars is determined with the 'Mono Spec' cars (those with standard road engines). The class was integrated with Mono2000 in 2010.

Note: Class titles are correct for current classes, and may not reflect the class names or structure that earlier championships were won under.