Charles Doolittle Walcott (March 31, 1850 – February 9, 1927) was an American invertebrate paleontologist. He became known for his discovery in 1909 of well-preserved fossils in the Burgess Shale of British Columbia, Canada.

Walcott was born in New York Mills, New York. He was interested in nature from an early age, collecting minerals and bird eggs and, eventually, fossils. He attended various schools in the Utica area but left at the age of eighteen without completing high school, the end of his formal education.[1] His interest in fossils solidified as he became a commercial fossil collector.[1] On January 9, 1872, Walcott married Lura Ann Rust, daughter of the owner of a farm in New York where Walcott made one of his most important trilobite discoveries (Walcott-Rust quarry). She died on January 23, 1876. Walcott's interest in fossils led to his acquaintance with Louis Agassiz of Harvard, who encouraged him to work in the field of paleontology; later that year, he began work as the assistant to the state palaeontologist, James Hall. He lost this job after two years but was soon recruited to the newly formed US Geological Survey as a geological assistant.[1] 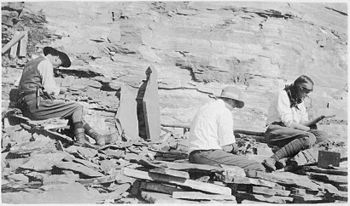 Charles excavates the Burgess Shale (near Field, British Columbia) with his wife and son, in the quarry which now bears his name. 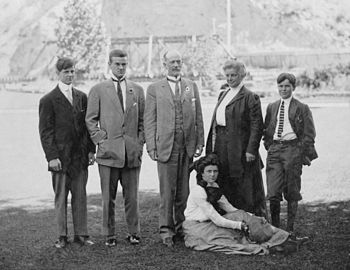 Charles Doolittle Walcott and his family in Provo, Utah around 1907. Walcott often took his family along on collecting trips. Click on the photo for more information about the Walcotts.

Walcott began his professional paleontology career by discovering new localities, such as the Walcott-Rust quarry in upstate New York and the Georgia Plane trilobite beds in Vermont, and by selling specimens to Yale University. In 1876, he became the assistant to James Hall, State Geologist of New York. Walcott also became a member of the American Association for the Advancement of Science.

In 1879, Walcott joined the US Geological Survey and rose to become its director in 1894. He worked especially on the Cambrian layer in locations throughout the United States, making numerous field trips and linking the fossils he collected to the sequence of rocks in a way that made important contributions to stratigraphy.

Walcott was elected to the National Academy of Sciences in 1896. In 1902, he met with Andrew Carnegie and became one of the founders and incorporators of the Carnegie Institution of Washington. He served in various administrative and research positions in that organization. In 1921 Walcott was awarded the inaugural Mary Clark Thompson Medal from the National Academy of Sciences.[2]

Walcott became Secretary of the Smithsonian Institution in 1907 after the death of Samuel Pierpont Langley, holding the latter post until his own death. He was succeeded by Charles Greeley Abbot. Because of Walcott's responsibilities at the Smithsonian, he resigned as director of the United States Geological Survey.[1] As part of the centennial celebration of Darwin's birth, Walcott was awarded an honorary doctorate by the University of Cambridge in 1909.[3]

He served as president of the American Association for the Advancement of Science in 1923. He was an advisor to then-president, Theodore Roosevelt.[1]

Walcott had an interest in the conservation movement and assisted its efforts.[1]

In 1910, the year after his discovery of Cambrian fossils in the Burgess shale, Walcott returned to the area accompanied by his sons Stuart and Sidney. Together they examined all the layers on the ridge above the point where the fossil-laden rock had been found, eventually finding the fossiliferous band. Between 1910 and 1924, Walcott returned repeatedly to collect more than 65,000 specimens from what is now known as the Walcott Quarry, named after him.

Walcott's wife Helena died in a train crash in Connecticut in 1911. In 1914, Walcott married his third wife, Mary Morris Vaux, an amateur artist and avid naturalist. She was happy to accompany him on his expeditions, as she loved studying nature. She made beautiful watercolor illustrations of wildflowers as she traveled with him in Canada.

Although Walcott spent a considerable amount of time at the Burgess Shale quarry on what became known as Fossil Ridge, he also traveled widely in other areas of the Canadian Rockies. Some of his numerous scientific publications feature spectacular panoramic photographs of the mountains taken from high passes or high on mountain slopes. 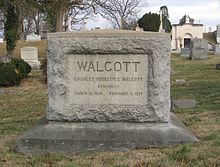 Gravesite of Walcott in Rock Creek Cemetery in Washington, DC

After Walcott's death in Washington, DC, his samples, photographs, and notes remained in storage until their rediscovery by a new generation of paleontologists in the late 1960s. Since then, many of his interpretations have been revised.

Walcott would be little known today if he had not been brought to attention by Stephen Jay Gould's book Wonderful Life (1989). In this book, Gould put forth his opinion that Walcott failed to see the differences among the Burgess Shale species and "shoehorned" most of these fossils into existing phyla. Many paleontologists would now take a much less negative view of Walcott's descriptions and of the theoretical perspective that shaped them.[4]

Walcott's work on Ordovician trilobites of New York also tended to be overlooked until, in the early 1990s, Rochester-based amateur paleontologist Thomas Whiteley revived Walcott's research and re-opened the Walcott-Rust quarry near Russia, New York. This localized stata has some of the best preserved Laurentian trilobites ever found, including enrolled specimens with soft body parts.

A peak on Mount Burgess in Canada was named after him. The Charles Doolittle Walcott Medal is awarded by the National Academy of Sciences every five years for outstanding work in the field of pre-Cambrian and Cambrian life and history.