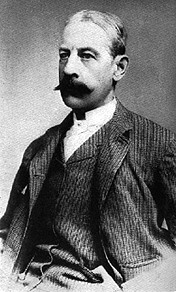 Bennett was educated primarily in . In 1866, the elder Bennett turned control of the "Herald" over to him. Bennett raised the paper's profile on the world stage when he provided the financial backing for the 1869 expedition by into to find in exchange for the "Herald" having the exclusive account of Stanley's progress.

Bennett, as did many of his class, indulged in the "good life": yachts, opulent private railcars, and lavish mansions. He was the youngest Commodore ever of the . He served in the Navy during the Civil War, and in 1866, won the first trans-oceanic boat race.

However, he often scandalized society with his flamboyant and sometimes erratic behavior. In 1877, he left New York after an incident that ended his engagement to socialite Caroline May. According to various accounts, he arrived late and drunk to a party at the May family mansion, then urinated into a fireplace in full view of his hosts. [ [http://www.worldwidewords.org/articles/gordon.htm World Wide Words: Gordon Bennett ] at www.worldwidewords.org]

Bennett's controversial reputation has been thought to have inspired the phrase "Gordon Bennett" as an expression of incredulous disbelief, common in the .

Settling in , he launched the Paris edition of the New York Herald, titled "The Paris Herald", the forerunner of the "". He backed 's voyage to the via the . The ill-fated expedition led to the starvation deaths of DeLong and 19 of his crew, a tragedy that only increased the paper's circulation.

He was a co-founder of the , a venture to break the Transatlantic cable monopoly held by .

Bennett returned to the United States and organized the first match in the United States at Dickel's Riding Academy at 39th Street and Fifth Avenue in . He would help found the Westchester Polo Club in 1876, the first polo club in America. He established the "Gordon Bennett Cup" for international yachting and the Gordon Bennett Cup for automobile races. In 1906, he funded a trophy for the "Coupe Aéronautique Gordon Bennett", which continues to this day. Bennett also offered a trophy for airplane racing.

In 1880, Bennett commissioned to design the in .

He did not marry until 73 to the Baroness de Reuter, daughter of , founder of Reuters news agency. He died on , in , ,

Bennett is interred in . The nearby , site of the French Open, is in the "Avenue Gordon Bennett". After his death, the "Herald" was merged with its bitter rival, the "".