Chico the Rainmaker was an English TV show made by Eyeline Films and the Children's Film Foundation. It was shown in 1974 on PBS in the USA, and broadcast in many UK cinemas in the 1970s and 1980s as part of their "Saturday Matinees". The show featured a talking shrunken head.

It was also known as The Boy with Two Heads. 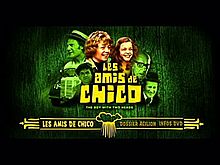 A boy named Chris Page finds a box at a local antiques shop that contains an eerie shrunken head. He and his sister, Jill, inadvertently play a special series of notes on a flute and call the head magically to life. It reveals itself to be Chicopacobacowana, a 2000 yr-old tribal rainmaker deity from the jungles of the Amazon.

'Chico' had been taken from the jungle by explorers three years previously, and had been awaiting an opportunity to return to his tribe ever since - he is vital to the tribe both as protector and because he has the power to make it rain. The head had been sold to the antiques shop inadvertently, and is being sought by an antiquities dealer (Stanley Thornton) who knows it to be priceless.

Two thieves (Doug & Des) who had earlier attempted to rob the antique shop, learn of a cash reward that Thornton is offering for Chico, and they attempt to capture him. The series centres on the children's adventures as they try to help Chico and to evade Thornton and the thieves.