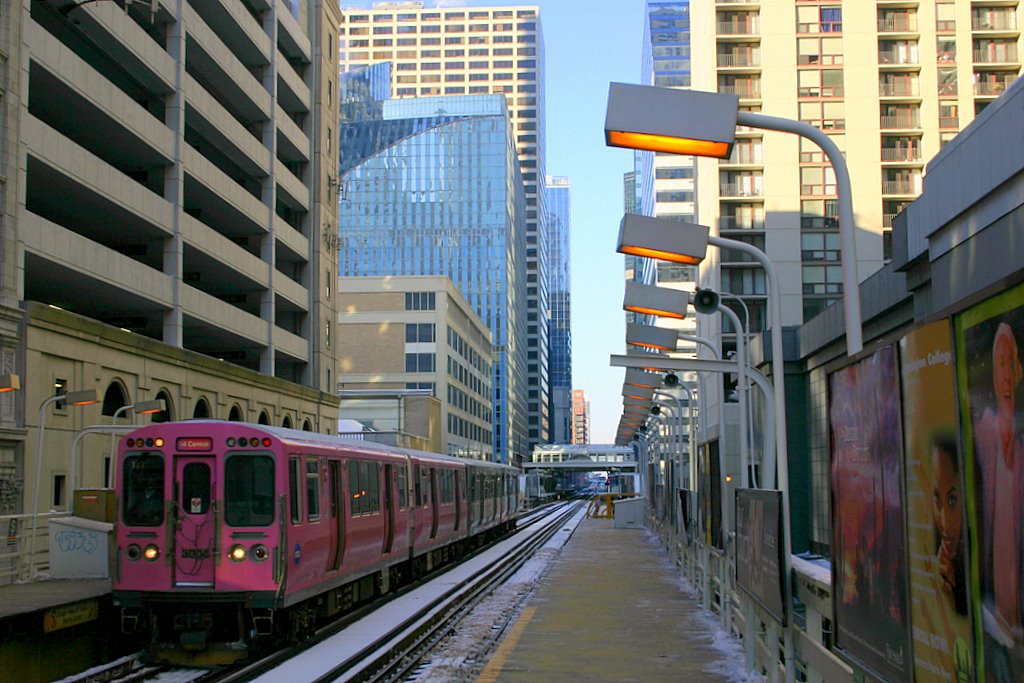 CTA Pink Line|The Pink Line (Douglas-Loop Service) is a rapid transit line in Chicago, run by the (CTA) as part of the system. It began operation for a 180-day trial period on , running between 54/Cermak Station in and the the Loop in downtown Chicago. The CTA has since added two six-month extensions to this trial. The route to the Loop follows tracks shared with Green Line trains on Lake Street, connected by the previously non-revenue Paulina Connector.

In January 2005, the CTA held hearings on its proposal to reroute trains from 54th/Cermak via the recently rebuilt Paulina Connector to the Lake Street Green Line, carrying Douglas branch trains to and around the elevated Chicago Loop (clockwise) for the first time since Douglas trains began using the Milwaukee-Dearborn-Congress Subway in downtown Chicago on , . This would allow a doubling of Blue Line trains to Forest Park on the Congress Line, since service would no longer be divided between the Forest Park and 54th/Cermak destinations. The CTA has also promised that service to/from 54th/Cermak would be increased 100% during rush hour.

At the initial time of proposal, this plan was often referred to as the "Silver Line," as the original idea was to use grey as the line color on printed materials and give it the friendlier route name of "Silver."

Opposition to the plan centers on loss of access to other Blue Line destinations such as UIC campus. The CTA has said that two rush hour trains per hour from 54th/Cermak (Douglas) will be routed through the subway to .

On , , the CTA approved the separate plan. Non-rush hour trains would all be routed via the Loop, Green Line, and Paulina Connector. During rush hour, service would be available on this routing as well as the original route via the Dearborn Street Subway every half hour. These changes were implemented beginning , , with the initial trial period scheduled to conclude 180 days later on , .

The Pink Line began operation on , , using a rebuilt connecting line that had not been used in regular revenue service for nearly 50 years.

The service, which was originally set up as a temporary service to be run for a trial period of 180 days (6 months), doubles service on both the Douglas branch (now mostly Pink Line) and the Forest Park branch of the Blue Line. This is accomplished by routing all but 12 trains per day coming from to , and adding entirely new service from the 54th Avenue terminal in Cicero to the Loop via the Paulina Connector and the Lake Street branch of the Green Line. Douglas trains circle downtown Chicago clockwise around the Inner Loop track via Lake-Wabash-Van Buren-Wells before returning west and southbound via Lake-Paulina to Cicero.

Previously all trains of the Douglas branch operated via the Milwaukee-Dearborn-Congress Subway through to .

On , , the Chicago Transit Authority announced that of the top three colors, , Gold and Silver, Pink had received the most votes in a write-in essay contest for Chicago-area schoolchildren in kindergarten through 8th grade—a $1,000 was awarded to a selected essay writer who advocated the color pink. [Chicago Transit Authority. [http://www.transitchicago.com/news/ctaandpress.wu?action=displayarticledetail&articleid=112209 And the color is... Pink Line] . Last updated March 30, 2006. Retrieved March 30, 2006.]

On the CTA board approved a six month extension to the trial period before making a decision on whether or not to make the changes permanent, [cite web |url=http://www.suntimes.com/news/metro/170452,CST-NWS-cta13.article |title=Nonstop airport trains on pause |author=Monifa Thomas |accessdate=2006-12-19 |work=Chicago Sun-Times ] and another 180-day extension was added to the trial in June 2007. [cite web |url=http://www.transitchicago.com/news/whatsnew2.wu?action=displaynewspostingdetail&articleid=106196 |title=Agenda - Chicago Transit Board - Regular Meeting, June 13, 2007 |accessdate=2007-08-19 |publisher= ]

On , the CTA began a six-month experimental ceasing of Blue Line operations on the Douglas Branch. All Douglas Branch operations will now be served by the Pink Line [ [http://www.suntimes.com/news/transportation/838770,cta031208.article Blue line's Cermak branch to get cut :: CHICAGO SUN-TIMES :: Transportation ] ]

The Pink Line, like the Blue Line, is operated using the Budd-built 2600-Series rail cars. This is primarily due to the fact that the Douglas branch is still generally part of the Blue Line, even though the Blue Line no longer runs down the Douglas Branch. Trains usually consists of only four cars during much of the day, and only two cars during late evenings on weekends. The Douglas Yard does occasionally send out six-car trains during rush hour, but this only occurs when there are extra cars in the yard.

In 2002, the CTA proposed the creation of the "Circle Line", which would utilize segments of existing rail lines to keep new construction to a minimum, in addition to 6.6 miles of new subway and elevated segments to the 'L' system to complete the circumferential route. Maps additionally suggested a possible extension of the existing Brown Line beyond the Loop to 54th/Cermak via the Green Line and the Paulina Connector, and Orange Line service from to Kimball, as other potential routings using the new infrastructure. This project is currently undergoing a standard federally mandated alternatives analysis.