The County Ground is a stadium located near the town centre of Swindon, England. It is home to Swindon Town Football Club and has been for over a century.

To the north of the football stadium is Swindon Cricket Club. Their pitch is also named The County Ground.

Swindon Town have been playing at the County Ground since 1896.

They played their games on the site of the adjacent cricket pitch also called the County Ground from 1893 until the ground opened.

Thomas Arkell of Arkell's Brewery donated £300 to finance the construction of a stand on what was then known as the 'Wiltshire County Ground', this investment was enough to begin development of a purpose built football ground. Since its original construction, the ground has been periodically updated with new features or fittings. A cover on the Shrivenham Road side was erected in 1932, followed by the current roof at the Town End. This cost £4,300, which was raised by the Supporters Club, and was opened on 27 August 1938 by local MP, W.W. Wakefield.[2]

The War Department took over the ground in 1940, where for a while POWs were housed in huts placed on the pitch. For this the club received compensation of £4,570 in 1945.[2]

The addition of floodlights in 1951 at a cost of £350, gave Swindon the honour of being the first League club to do so. These were first tried out v Bristol City on 2 April 1951 beating Arsenal by six months. These original set of lights were supplemented by lights on both side stand roofs, which were sufficient for the County Ground to stage its first floodlit league match on 29 February 1956 v Millwall. (7 days after Fratton Park became the 1st ground to stage a floodlit league fixture). The present pylons date from 1960.[2]

Additions included the building of the "new" all-seater Arkell's (or North) stand in 1971 (on the site of the original) and following the Hillsborough disaster; the County Ground was converted to an all-seater stadium beginning with the addition of extra seating in front of the North Stand and the building of a sponsored stand (originally the Intel Stand, then the Nationwide Stand, now the Don Rogers Stand) in the early 90s. The Nationwide Stand replaced the Shrivenham Road enclosure, a two-tiered terrace. During the stand's history, a fire broke out on the top tier making the upper area unsafe. During its later years of use, the upper tier was used by Television Cameras and Crowd monitoring only. 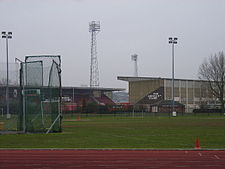 The County Ground is also the only football stadium in the world with the most prestigious name in watch making acting as its timekeeper - Rolex, whose famous logo adorns the clock on the Stratton Bank stand.[3]

The ground itself is on land owned by Swindon Borough Council to whom the club pay rent. Swindon have in the past considered a move to a club owned stadium to generate more revenue, but have not had the financial backing to do so. In 2006 a redevelopment campaign for the County Ground began,[4] with the club and TrustSTFC (the supporters' trust) raising a petition to 'Save Our Home' urging the Borough Council to "facilitate the redevelopment of the stadium and do everything they can to keep the club within the Borough"[5] including the proposed upgrading of the adjacent Cricket Club to County standard and Athletic Club to Olympic standard.

Swindon Town's new owners released a 10 point plan after they took over the club in January 2008 outlining future plans for the County Ground. In this 10 point plan various upgrades to the current ground were noted. The club plans to replace all of the seats that are not red and white and replace them with red and white seas to unify the seating and make the stadium look more up to date. The club also plan to improve disabled access and improve the playing surface. The current owners of Swindon Town also hope to commence with a ground redevelopment at the County Ground site or new stadium for Swindon Town, hence the reasons for minor modifications until a new stadium becomes a reality.

Relocation was first proposed around the year 2000, but since then redevelopment appears to have been the preferred option.

In September 2009 Swindon Town announced that the County Ground would be redeveloped into a 25,000-seater stadium ready for the 2012-13 season. Had Bristol become a World Cup host city, it had been hoped that international Teams will use the County Ground as a training ground in 2018 or 2022. However, England's bid to host the World Cup failed in December 2010.

In January 2011, revised plans were announced, to expand the stadium capacity to 19,000 by rebuilding the town end to a 4,000 seater stand, putting a roof over the stratton bank, putting executive boxes in the Don Rogers stand, then finally refurbishing the Arkells stand with a technology park built behind for more income. It was also suggested that in the future, if needs be, the stadium could be increased to hold 25,000. This proposition was chosen due to the increased financial viability and sustainability for the future. The land which the county ground is on will also be bought in the process.

These plans, however, have been delayed due to Swindon Town's relegation to League Two at the end of the 2010-11 season. 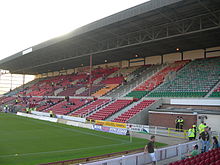 The Arkells stand in July 2007. The entire away support was kept in the Stratton Bank on this occasion 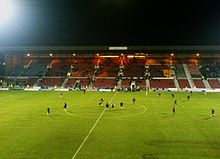 Located on the north side of pitch. The majority of this stand was constructed in 1971, with extra seating being added near the pitch-side in the late 1992. At either end of the stand are large windshields, and there are two roof-supporting beams within the stand. It contains an executive seating area, VIP lounge, the players' dressing rooms and a tunnel out onto the pitch. Named after Thomas Arkell of Arkell's Brewery, who funded the original Arkell's stand. The west corner of this stand is allocated to away fans. 1,200 of the total 3,300 away allocation is here. This stand has undergone a face lift with the multiple coloured seats replaced with red or white seats to give the stand a cleaner, more up to date look.

It also is home to the two new dugouts which were built during the face-lift. The stand will be thoroughly refurbished during the county ground future developments

The Stratton Bank on a sunny match day in August 2006

This is at the east end of the pitch. It is a former terrace, now with seats bolted on, and has no roof. Although planning permission was granted to build a roof on the stand, due to the club's financial plight at the time the necessary funds were not available. The Stratton Bank stand makes up the remaining 2,200 of the away allocation, but is only really needed for big games (Local Derbies, Big league, cup games) or for larger clubs with big away support. The 1,200 in the Arkell's Stand is usually more than adequate. The stadium scoreboard is located at the back of this stand. A notable feature is a large Rolex clock adjacent to the scoreboard which is owned by Deacon's Jewellers, the only one in the world as part of a football stadium.

On 28 February 2009 for Swindon Town's 40th anniversary of winning the league cup in 1969 they announced they will be holding a competition to rename Stratton Bank to whatever the winner choses for the 2009/10 and 2010/11 season. The winner, The Adkins Family Stand, was announced on Sky TV show Soccer A.M on 2 May 2009 with the draw being done by Then Swindon Town chairman Andrew fitton. 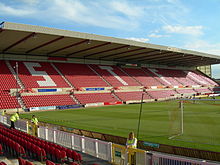 The stand in July 2007 (then the Kingswood Stand)

To the south of the pitch. A stand built in 1994 as the Intel Stand, then sponsored by the Nationwide Building Society until the end of the 2006/07 season and then sponsored by the Kingswood Group until March 2008. It is sometimes referred to as the South Stand by supporters. It features a cantilever roof, which means there are no roof-supports obstructing the view of the game. This replaced an old two-tier stand, of which the upper tier had become unusable due to structural problems.

There is a second concourse inside the stand which can be opened and used as a second executive area to the ground. If some seats are removed this would allow the club to use this concourse to add executive boxes to the County Ground stadium.

It is understood this concourse has never been opened due to the lack of funds Swindon Town have had over the last 10 years.

On 14 April 2008, Chief Executive Nick Watkins told a fans forum that the club is currently considering opening up the second concourse to add executive boxes to the ground and in 2011, when plans for redeveloping a new county ground, this was confirmed.

From the start of the 2007/08 season, the stand was renamed as the Don Rogers Stand.

It currently has a capacity of around 5,000. 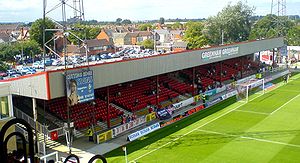 At the west end of the pitch, it has its name for being closest to the town centre. As of the mid-2000s it has become popular with the more vocal fans, and therefore has what is considered to be the best atmosphere in the stadium on a match day. One factor is the lower prices in this end and same prices on the day as in advance.

The south end of this stand is notable because the floodlight located there pierces the stand's roof and is integrated into the stand. The Town End is sponsored by Fast Plant as of October 2010 which was first seen at Swindon Town's derby match against Bristol Rovers on 9 October 2010 which Town won 2-1.

The ground has been used to host England International games, the women's International between England and Holland taking place on 14 March 2007 and also under 17's matches.[6] The ground has also hosted other football events such as local school competitions and community soccer schools.