Born Cora Marie Frye in Burgin, Kentucky, she was the daughter of a Ziegfeld Follies girl. After her parents divorced, she eventually moved with her mother and stepfather to Yonkers, New York. At the age of 15, McDonald began modeling and competed in numerous beauty pageants and was crowned Miss New York in 1939.[1] At 17, she landed a showgirl role in a 1940 Broadway production at the Earl Carroll Theatre called Earl Carroll's Vanities. Shortly thereafter, she moved to Hollywood hoping to develop a career in show business. She continued to work for the owner of the Broadway theatre as a showgirl at his Sunset Boulevard nightclub.

Marie McDonald's singing voice brought work with Tommy Dorsey & His Orchestra on his radio show and she later performed with other big bands. In 1942, she was put under contract by Universal Studios and immediately appeared in several minor roles. That year, she appeared in three motion pictures, most notably, Pardon My Sarong, which earned her the nickname "The Body" for her shapely physique.[2] The following year she co-starred in A Scream in the Dark, a "B" detective mystery for Republic Pictures that met with reasonable success. Her next starring role came in 1945 when she worked for a small independent production company in another "B" film called Getting Gertie's Garter. She costarred with Gene Kelly in MGM's Living in a Big Way (1947). Despite her talent she would become more known for her figure than for any of film roles.[citation needed] 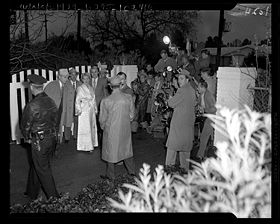 Marie McDonald re-enacts scene from her story of kidnapping at home in Encino, California.

During World War II, McDonald became one of Hollywood's most popular pin-up girls and she posed for the United States military magazine, YANK.

Despite various personal problems, McDonald recorded an LP for RCA Victor in 1957, The Body Sings, backed by Hal Borne and His Orchestra, which consisted of twelve standard ballads. She also toured the world in a very successful nightclub act. Between 1945 and 1950 she appeared in only two films and then again not until 1958 when she was cast in a slapstick comedy opposite Jerry Lewis in The Geisha Boy. In 1963, she made her last appearance in the film, Promises! Promises!, opposite a naked Jayne Mansfield.

McDonald had married for the first time in 1940 but this marriage quickly ended. Her second marriage, to her agent Victor Orsatti, lasted four years.[3] She was also one of Bugsy Siegel's mistresses at the time. In all, she married seven times, including twice to millionaire Harry Karl, who later married Debbie Reynolds.[4] There were also romances with Eddie Fisher and Michael Wilding. She suffered multiple miscarriages before adopting two children and giving birth to a daughter, Tina Marie, in 1956.[5] McDonald's tumultuous personal life soon overshadowed her career. Tabloids regularly reported on her rocky romances, car accidents, and an escape from an Australian psychiatric clinic.[6] She also made headlines when, in 1957, she claimed she was kidnapped by two men.[7]

In 1965, McDonald was found dead of a drug overdose[8] in her Calabasas, California home. She was laid to rest in the Forest Lawn Memorial Park Cemetery in Glendale, California.[9]

Three months after McDonald's death, in January 1966, her sixth husband, Donald F. Taylor, who was a producer who had occasionally acted under the name Don Taylor, committed suicide. McDonald's three surviving children were raised by Harry Karl and his wife, Debbie Reynolds.