Bloodbath at the House of Death

Bloodbath at the House of Death

Infobox Film
name = Bloodbath at the House of Death 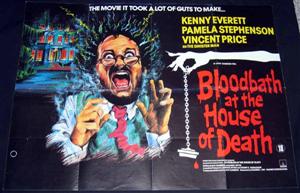 "Bloodbath at the House of Death" is a produced in 1983, starring the British and featuring . It is an over-the-top spoof loosely inspired by "The Amityville Horror" and other horror films from the same period.

The film opens in 1975 at a place called Headstone Manor, which is being used as a "businessman's weekend retreat and girls' summer camp". A few minutes into the film, a group of ic s enter the house and kill 18 of its occupants (the 19th, played by , being the sole survivor). The murders were committed using the following methods:
*Two were axed to death.
*Two had their throats slit.
*One man was hanged.
*Two girls were struck by lightning.
*One man watching underwent and blew up.
*Four were stabbed to death.
*Six were frozen to death in the Manor's freezer.

In 1983, Doctor Lucas Mandeville () and Doctor Barbara Coyle () are sent to investigate readings in the area that have been traced to Headstone Manor, now known by locals as the House of Death.

Along with several other scientists, Mandeville and Coyle set up their equipment in the house, while the Sinister Man (), a 700-year-old Satanic priest, prepares a rite in the nearby woods to purge the house of its unwanted guests.

During this time, Mandeville reveals that he was once a successful German named Ludwig Manheim, who was reduced to "smart-arse research crap" after a humiliation in the past. Coyle also encounters a , and the two engage in .

Several satanic clones of Mandeville, Coyle and the other scientists have entered the house, and begin killing off the originals and taking their place. When Coyle is about to be killed, she is rescued by the poltergeist and saved. The satanic monks then take off in a spaceship, revealing that these monks are aliens using the house for their activities on Earth. The film ends with the spaceship soaring into the skies, with an voice groaning: "Oh, shit! Not again!"

The film was released in the by , and was considered by critics to be very poor. Martyn Auty wrote: "Presumably intended as high camp; looks like low-grade "Carry On"." [Halliwell's Film Guide.] It was given an in the United Kingdom.

A novel of the film was also published, which named Marcel Wave (one of Kenny Everett's TV characters) as the resident who underwent .

References to other films

*The dark settings and ominous music are inspired by the films of the 1960s, while the amount of blood used parodies the s popular at the time.

*The idea of the house developing a mind of its own recalls the featured in "The Shining" by .

*The idea of alien beings using a spooky old house as a base can also be found in the 1975 film "".

*The front of Headstone Manor loosely resembles , the house featured in "".