Near-field scanning optical microscopy (NSOM/SNOM) is a microscopic technique for nanostructure investigation that breaks the far field resolution limit by exploiting the properties of evanescent waves. This is done by placing the detector very close (distance much smaller than wavelength λ) to the specimen surface. This allows for the surface inspection with high spatial, spectral and temporal resolving power. With this technique, the resolution of the image is limited by the size of the detector aperture and not by the wavelength of the illuminating light. In particular, lateral resolution of 20 nm and vertical resolution of 2–5 nm have been demonstrated.[1] As in optical microscopy, the contrast mechanism can be easily adapted to study different properties, such as refractive index, chemical structure and local stress. Dynamic properties can also be studied at a sub-wavelength scale using this technique.

NSOM/SNOM is a form of scanning probe microscopy.

Edward Hutchinson Synge, a scientist, is given credit for conceiving and developing the idea for an imaging instrument that would image by exciting and collecting diffraction in the near field. His original idea, proposed in 1928, was based upon the usage of intense nearly planar light from an arc under pressure behind a thin, opaque metal film with a small orifice of about 100 nm. The orifice was to remain within 100 nm of the surface, and information was to be collected by point-by-point scanning. He foresaw the illumination and the detector movement being the biggest technical difficulties.[2][3][4] John A. O'Keefe also developed similar theories in 1956. He thought the moving of the pinhole or the detector when it is so close to the sample would be the most likely issue that could prevent the realization of such an instrument.[5] It was Ash and Nicholls who, in 1972, first broke the Abbe’s diffraction limit using radiation with wavelength of 3 cm. A line grating was resolved with a resolution of λ0/60.[6] It was twelve more years before the first papers that used visible radiation for near field scanning were published by Pohl et al., and Lewis et al. Both these works involved the use of a subwavelength metal coated optical aperture at the tip of a sharp pointed probe, and a feedback mechanism to maintain a constant distance of a few nanometers between the sample and the probe.[7] Resolution as low as 25 nm (about λ0/20) was achieved.[8]

Here, λ0 is the wavelength in vacuum; NA is the numerical aperture for the optical component (maximum 1.3–1.4 for modern objectives with a very high magnification factor). Thus, the resolution limit is usually around λ0/2 for conventional optical microscopy.[9]

This treatment only assumes the light diffracted into the far-field that propagates without any restrictions. NSOM makes use of evanescent or non propagating fields that exist only near the surface of the object. These fields carry the high frequency spatial information about the object and have intensities that drop off exponentially with distance from the object. Because of this, the detector must be placed very close to the sample in the near field zone, typically a few nanometers. As a result, near field microscopy remains primarily a surface inspection technique. The detector is then rastered across the sample using a piezoelectric stage. The scanning can either be done at a constant height or with regulated height by using a feedback mechanism.[10]

Sketch of a) typical metal-coated tip, and b) sharp uncoated tip.[11]

There exist NSOM which can be operated in so-called aperture mode and NSOM for operation in a non-aperture mode. As illustrated, the tips used in the apertureless mode are very sharp and do not have a metal coating.

Though there are many issues associated with the apertured tips (heating, artifacts, contrast, sensitivity, topology and interference amongst others), aperture mode remains more popular. This is primarily because apertureless mode is even more complex to set up and operate, and is not understood as well. There are five primary modes of apertured NSOM operation and four primary modes of apertureless NSOM operation. The major ones are illustrated in the next figure.

Feedback mechanisms are usually used to achieve high resolution and artifact free images since the detector must be positioned within a few nanometers of the surfaces. Some of these mechanisms are:

It is possible to take advantage of the various contrast techniques available to optical microscopy though NSOM but with much higher resolution. By using the change in the polarization of light or the intensity of the light as a function of the incident wavelength, it is possible to make use of contrast enhancing techniques such as staining, fluorescence, phase contrast and differential interference contrast. It is also possible to provide contrast using the change in refractive index, reflectivity, local stress and magnetic properties amongst others.[10][11] 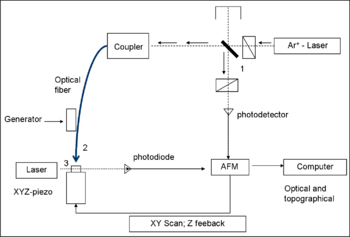 The primary components of an NSOM setup are the light source, feedback mechanism, the scanning tip, the detector and the piezoelectric sample stage. The light source is usually a laser focused into an optical fiber through a polarizer, a beam splitter and a coupler. The polarizer and the beam splitter would serve to remove stray light from the returning reflected light. The scanning tip, depending upon the operation mode, is usually a pulled or stretched optical fiber coated with metal except at the tip or just a standard AFM cantilever with a hole in the center of the pyramidal tip. Standard optical detectors, such as avalanche photodiode, photomultiplier tube (PMT) or CCD, can be used. Highly specialized NSOM techniques, Raman NSOM for example, have much more stringent detector requirements.[11]

As the name implies, information is collected by spectroscopic means instead of imaging in the near field regime. Through Near Field Spectroscopy (NFS), one can probe spectroscopically with subwavelength resolution. Raman SNOM and fluorescence SNOM are two of the most popular NFS techniques as they allow for the identification of nanosized features with chemical contrast. Some of the common near field spectroscopic techniques are:

NSOM is particularly vulnerable to artifacts that are not from the intended contrast mode. The most common root for artifacts in NSOM are: