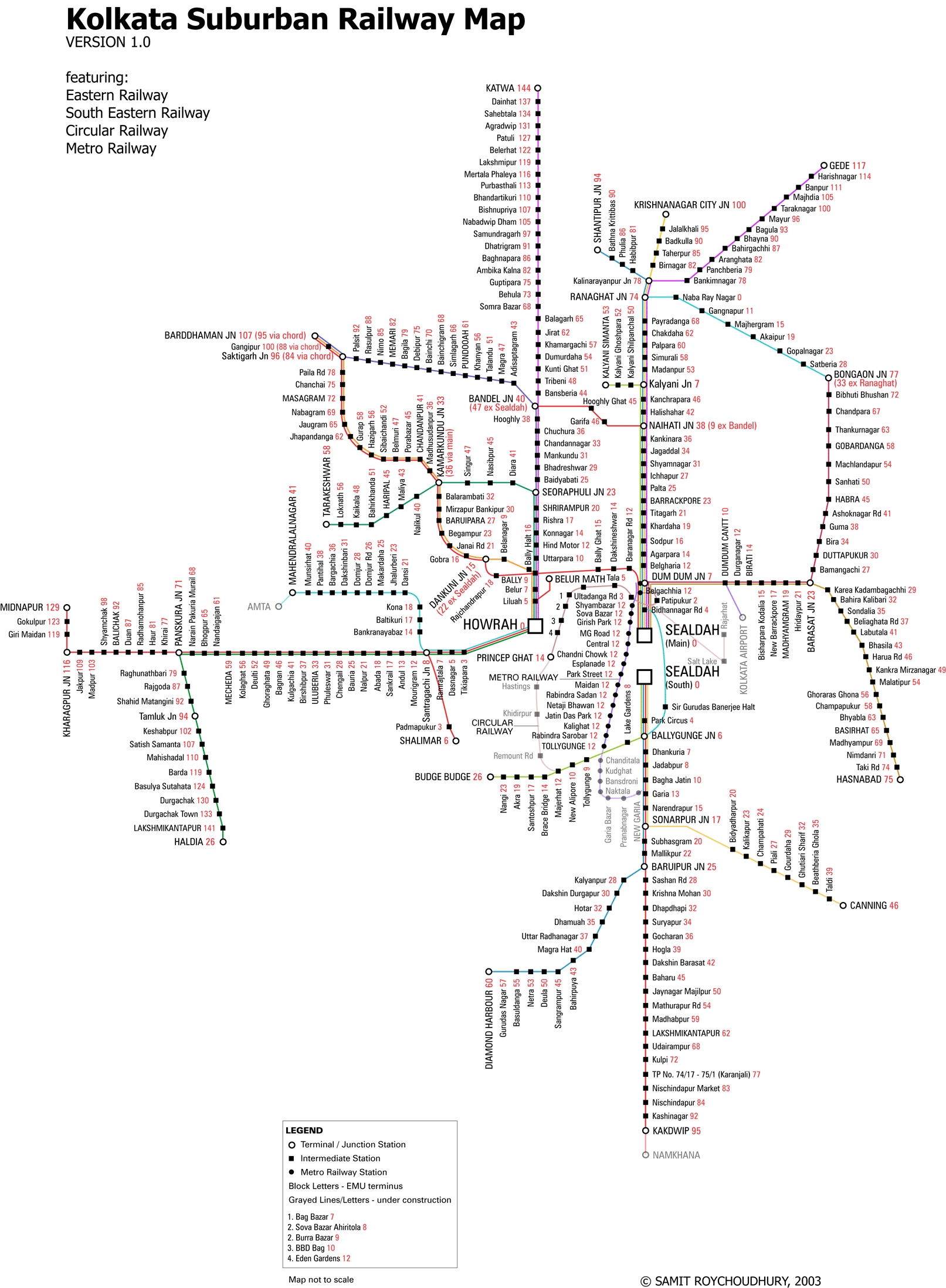 imagesize = 300px
locale =
transit_type =
began_operation = 1854
lines = Circular, Eastern and South Eastern
stations = and
track_gauge = 1676 mm (5 ft 6 in) ()
operator = and The Kolkata Suburban Railway is the rail system for the suburbs surrounding the city of (Calcutta). Railways such as this are important and heavily-used infrastructure in .The (IR) has several divisions of which the Eastern Railway and the South Eastern Railway are headquartered in . There are two major railway stations in Kolkata- Howrah and . Another major terminal has been built at .This new terminal has been named 'Kolkata'. Recently another terminal at Shalimar near Howrah started operating. Some intercity express trains start from there too.Kolkata and its neighbouring districts have an extensive (but crowded) suburban railway system. Most of the trains are EMUs (Electric Multiple Units). The extensive rail network stretches into the districts of , , Nadia, Howrah, Hooghly, etc. The Suburban railway system can be categorized as follows:

This line serves the northern suburbs on the eastern bank of and further east towards the very end of the international border between and . The destinations facilitated by this line are:

This line operates on the southern parts of the city and serves the southern suburbs of Calcutta and the entire district. The areas served are:

However, at Dum Dum Cantt., the Airport line cuts off to serve the following stations:
, , .

At , the line splits into:1. Bongaon line2. Hasnabad line

At Naihati, the line splits into:1. Bandel section2. main section

At kalinarayanpur, a station next to ranaghat on the main line, the Shantipur line emerges.

At Ballygunge, the line splits up into the 1)South secions, and 2)Budge Budge Section

The Canning branch splits from Sonarpur to Canning line and Baruipur section.

At Baruipur, the line branches into the Diamond Harbour section and the Kakdwip section.

This line used to connect the stations of and (now ) with the southern port town of Falta. The line was closed down in 1957. If operational, it could have proved to be a boon for the people of the ex-South Suburban Municipal areas. See for more details.

Operated by the Howrah division of Eastern Railways, this line runs on the western bank of river Hooghly and serves the following areas:
* The northern part of Howrah district - Liluah, Belur, Bally.
* The eastern part of Hooghly district like Rishra, Serampore, Chandannagar, Chuchura, Bandel.
* The central part of Hooghly district like Tarakeswar.
* The central part of Bardhaman district connecting the town of . From Barddhaman/Bardhaman, another suburban service connects the cities of and further to the west.
* The eastern part of Bardhaman district like Katwa.

, , .
From Shalimar there are also DMU services to Digha.

At , the line further divides into:
# Midnapore Section
# Haldia Section

However, at ., the branch line cuts off to serve the station.

At , the line splits into two sections:
# Barddhaman (via Dankuni) Section
# Seoraphuli Section

At , the line branches into:
# Tarakeshwar Section
# Section

At , the line splits into:
# Barddhaman Section
# Katwa Section