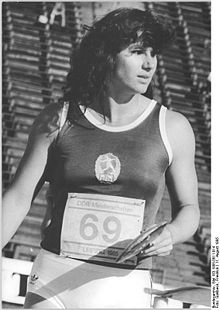 Martina Hellmann, née Opitz (born 12 December 1960 in Leipzig, Saxony), is a retired German track and field athlete who represented East Germany. She was the Olympic champion in the discus throw at the 1988 Summer Olympics. She also won the World Championship in that event in 1983 and again in 1987.

Hellmann was sixteen years old when she began participating in the event. In 1977 she gave the participants' oath at the opening of the East German gymnastics and sport festival. That summer she set the world record for 16-year-olds with a throw of 55.00 meters. Her career was plagued by sickness and injury until 1983 when she became the surprise world champion. She was unable to compete at the 1984 summer Olympic games due to her country's boycott. 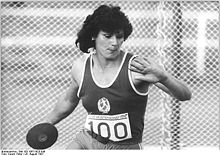 On 6 September 1988 she threw the discus 78.14 meters, further than anybody had ever thrown it before. The throw came though in an unofficial training tournament in the East German training camp at Kienbaum, therefore the throw was not eligible to be considered a world record. Her personal best throw was 72.92 metres, achieved in August 1987 in Potsdam. This result ranks her tenth on the world all-time list[1] and sixth among German discus throwers, behind Gabriele Reinsch, Ilke Wyludda, Diana Gansky-Sachse, Irina Meszynski and Gisela Beyer.[2]

After the 1992 Summer Olympics, where she was eliminated during qualification, she retired. She later was the head of a sports group of the insurance company AOK and became a manager at a cabaret in Leipzig.

Hellmann represented the SC DHfK Leipzig sport club and trained with Rolf Wittenbecher and Bernhard Thomas. During her active career she was 1.78 meters tall and weighed 81 kilograms.