March of the Pigs

March of the Pigs

"March of the Pigs" is a song written by Trent Reznor of American industrial rock act Nine Inch Nails. It was released in 1994 as the first single from The Downward Spiral (1994), the second album by Nine Inch Nails.

According to the liner notes, the song has a BPM rate of 269.[1] The song's high energy (analogous to a previous NIN track, "Wish"), segued by two piano breakdowns, has made it a staple of NIN's live concert performances. It is also one of the band's shortest hit songs, clocking in at just under three minutes. 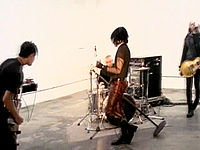 Reznor and band in the "March of the Pigs" music video.

After abandoning a more elaborate version before filming could be completed, Reznor and the live band assembled for the then-impending Self Destruct Tour (featuring drummer Chris Vrenna, keyboard player James Woolley, guitarist Robin Finck and bassist/guitarist/keyboardist Danny Lohner) regrouped with director Peter Christopherson to film a stripped-down, minimalist music video for the song. The video, released in March 1994, features the band performing the song live in front of a white wall backdrop, with Reznor moving around aggressively, pushing the other bandmembers and their instruments, and repeatedly tossing his microphone away. Throughout the video, stagehands visibly move into the frame to reset the equipment he knocks over, handing Reznor a microphone each time he needs to start singing again after an instrumental section. The bulk of the video appears to be filmed in one long take, with the camera zooming and panning continuously. The video uses the live performance version of the song recorded at the video shoot, rather than synchronising the footage to the studio-recorded version from the album as most music videos do. This version of the song is also included on the "Closer" cassette single.

Portions of the earlier, uncompleted video are included on the Closure DVD disc image file that appeared on file-sharing network The Pirate Bay in December 2006; this file is believed to be a leak of a completed but (so far) officially unreleased deluxe DVD reissue of the band's 1997 VHS/laserdisc long form music video Closure. In this version of the video, the band performs the song in a red cave-like set with water at their feet, and a midget appears.

Live performance videos of "March of the Pigs" are included on each of the band's live releases: Closure, And All that Could Have Been, and Beside You in Time.

The American "March of the Pigs" CD single contains two mixes of the title track, two remixes of its fellow The Downward Spiral track "Reptile," and "A Violet Fluid," a non-album instrumental track. In the UK, the single was released as a two-disc (each sold separately) CD single, adding a censored radio edit of "March of the Pigs" and "Big Man With a Gun" from The Downward Spiral. The disc art for this single features a curled-up millipede, an image that was later used on the cover of the single "Closer".

A limited edition of "March of the Pigs" was released in the vinyl platform. In an unusual move, each of the copies are measured to 9 inches (23 cm), a homage to the name of Nine Inch Nails. The two tracks are heard in Side A, whereas an etching can be seen in Side B. (see Unusual types of gramophone records)

The album on which the song is featured, The Downward Spiral, debuted in March 1994 at number two on the US Billboard 200 chart[2] Thirteen years after its release, it debuted at #9 and peaked at #6 on the Canadian Singles Chart.[3]

A cover version of "March of the Pigs" has been recorded by Mae for the 2006 compilation Punk Goes 90's.

The song was released as a track for the video game Rock Band on February 26, 2008 for Xbox 360 and on February 28 for PlayStation 3. It was available as a standalone download or as part of the 'Nine Inch Nails' song pack (also including "The Perfect Drug" and "The Collector").

It was also featured on Rock Band Track Pack Vol. 1 for PlayStation 2 and Wii.