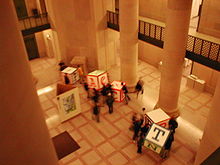 A hack in progress in Lobby 7 at MIT 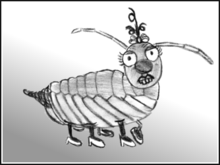 Female Stone louse, appearing in highly reputed German medical dictionary Pschyrembel for 'quite a while'.

A practical joke (also known as a prank, gag, or jape) is a mischievous trick played on someone, typically causing the victim to experience embarrassment, indignity, or discomfort. Practical jokes differ from confidence tricks in that the victim finds out, or is let in on the joke, rather than being fooled into handing over money or other valuables. Practical jokes or pranks are typically lighthearted, reversible or non-permanent, and aim to make the victim feel foolish or victimized to a certain degree. However, practical jokes may also involve cruelty.

The term "practical" refers to the fact that the joke consists of someone doing something physical, instead of a verbal or written joke. For example, the joker who is setting up and performing the practical joke, might hang a bucket of water above a doorway and rig the bucket using pulleys such that, when the door opens, the bucket dumps the water. The joker would then wait for the victim to walk through the doorway and be drenched by the bucket of water. Objects can also be used in practical jokes, like fake vomit, chewing gum bugs, exploding cigars, stink bombs and whoopee cushions.

The American humorist H. Allen Smith wrote a 320-page book in 1953 called The Compleat Practical Joker (ISBN 0-688-03705-4) that contains many examples of practical jokes. A typical one, recalled as his favorite by the playwright Charles MacArthur, concerns the American painter and bohemian character Waldo Peirce. Peirce was living in Paris in the 1920s and "made a gift of a very big turtle to the woman who was the concierge of his building." The woman doted on the turtle and lavished care on it. A few days later Peirce substituted a somewhat larger turtle for the original one. This continued for some time, with larger and larger turtles being surreptitiously introduced into the woman's apartment. The concierge was beside herself with happiness and displayed her miraculous turtle to the entire neighborhood. Peirce then began to sneak in and replace the turtle with smaller and smaller ones, to her bewildered distress. This was the storyline behind Esio Trot, by Roald Dahl.

Modern and successful pranks often take advantage of the modernization of tools and techniques. In Canada, engineering students have a reputation for annual pranks; at the University of British Columbia these usually involve leaving a Volkswagen beetle in an unexpected location (such as suspended from the Golden Gate Bridge[2] and the Lions Gate Bridge[3]). A similar prank was undertaken by engineering students at Cambridge University, England, where an Austin 7 car was put on top of the Senate House building.[4] Pranks can also adapt to the political context of the era.[5] Students at the Massachusetts Institute of Technology (MIT) are particularly known for their 'hacks'.[6]

Not everyone enjoys practical jokes. Robert A. Heinlein once wrote that "A 'practical joker' deserves applause for his wit according to its quality. Bastinado is about right. For exceptional wit one might grant keelhauling. But staking him out on an anthill should be reserved for the very wittiest." [7]

Some notable people have developed reputations as pranksters in addition to their career accomplishments, or in some cases have made pranking their primary work. Some "full-time" pranksters are comedians or entertainers, while others are more concerned with social activism or protest movements.

People listed below as "pranksters" seem to spend most of their "working day" planning or perpetrating practical jokes, whereas others listed below have careers not otherwise related to pranking.