The Norwegian Lundehund (Norsk Lundehund) is a small dog breed of the Spitz type that originates from Norway. Its name is composed of the prefix Lunde, from the Norwegian lundefugl (puffin), and the suffix hund, meaning dog. The breed was originally developed for the hunting of puffins and their eggs. 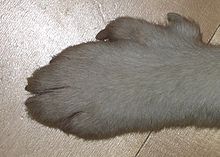 The Lundehund has six toes

The Norwegian Lundehund is a small, rectangular Spitz type dog. The Lundehund has a great range of motion in its joints, allowing it to fit into and extricate itself from narrow passages. Dogs of this breed are able to bend their head backwards along their own spine and turn their forelegs to the side at a 90-degree horizontal angle to their body, much like human arms. Their pricked, upright ears can be folded shut to form a near-tight seal by folding forward or backward. The Norwegian Lundehund is a polydactyl: instead of the normal four toes per foot, the Lundehund normally has six toes, all fully formed, jointed and muscled. Some specimens may on occasion have more or fewer than six toes per foot. The outercoat is dense and rough with a soft undercoat. The Lundehund is adapted to climb narrow cliff paths in Røst where it originally would have hunted puffins.

The breed has a long history. As far back as 1600 it was used for hunting puffins along the Norwegian coast. Its flexibility and extra toes were ideal for hunting the birds in their inaccessible nesting locations on cliffs and in caves. Interest for the breed declined when new methods for hunting puffins were invented and a dog tax was created. Around 1900, they were only found in the isolated village of Mostad (spelled Måstad in Norwegian), Lofoten. The breed was nearly extinct around World War II when canine distemper struck Værøy and the surrounding islands. In 1963, the population was further decimated by distemper again. This time, only 6 dogs survived (1 on Værøy & 5 in southern Norway Hamar (these 5 were from the same mother)), creating a population bottleneck. Due to careful breeding with strict guidelines, there are now an estimated 1,500–2,000 dogs in the world, with around 1,100 of the population in Norway and ~350 in the United States. Height: 12–15 inches (300–380 mm) (12.5–15 inches (320–380 mm) in UKC standard).

Lundehund gastroenteropathy is a set of digestive disorders that can lead to an overgrowth of digestive bacteria, and a loss of ability to absorb nutrients from food.[1] In extreme cases the dog can starve due to its inability to derive nutrients and protein from food, regardless of food intake. All Lundehunds have the genetics to have this illness, though not every Lundehund is severely afflicted and some are symptom free. There is no cure, though the disease can be managed.[2]

The Norwegian Lundehund was approved into the American Kennel Club's Miscellaneous Class on July 1, 2008, after a unanimous vote by the AKC Board of Directors on November 13, 2007.[3] The Lundehund made its AKC conformation debut at the Roaring Fork Kennel Club show in Eagle, Colorado on July 12, 2008.[4] It made its introductory premier at a major US event at the AKC/Eukanuba National Championship in Long Beach, California, on December 13 and 14, 2008.

On February 12, 2010, the Board of Directors of the American Kennel Club voted to accept the Norwegian Lundehund into the AKC stud book on December 1, 2010. On January 1, 2011, it became a part of the Non-Sporting Group.[5]