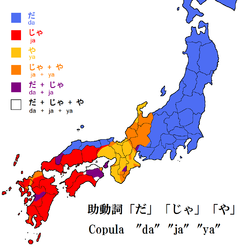 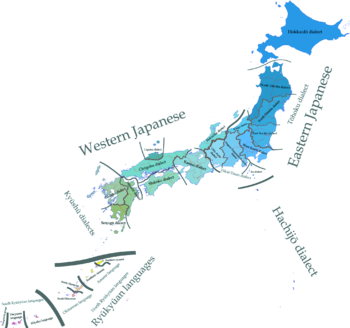 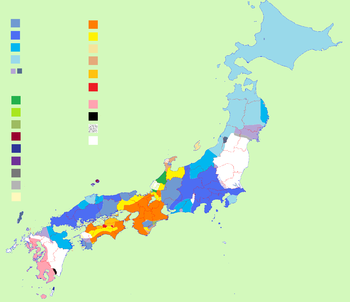 Regional variants of Japanese have been confirmed since the Old Japanese era. Man'yōshū, the oldest existing collection of Japanese poetry includes poems written in eastern dialects (See also Old Japanese#Dialects). From the Nara period to the Edo period, the dialect of Kinai (now central Kansai) had been the de facto standard Japanese, and the one of Edo (now Tokyo) took over in the late Edo period.

With modernization in the late 19th century, the government and the intellectuals promoted establishment and spread of the standard language. The regional languages and dialects were slighted and suppressed, and so locals had an inferiority complex about their "bad" and "shameful" languages. The language of instruction was standard Japanese, and some teachers administered punishments for using non-standard languages particularly in Okinawa and Tohoku regions (See also Ryukyuan languages#Modern history). In the years of 1940s to 1960s, the period of Shōwa nationalism and post-war economic miracle, the push for the standardization of regional languages/dialects reached its peak.

The classification of Japanese dialects has various theories. Misao Tōjō classified mainland Japanese dialects into three groups: Eastern, Western and Kyushu dialects as you can see below paragraphs. Toshio Tsuzuku included dialects in Gifu and Aichi prefectures to Western Japanese. Mitsuo Okumura classified Kyushu dialects as a subclass of Western Japanese. These theories are mainly based on grammatical differences between east and west, but Haruhiko Kindaichi classified mainland Japanese into concentric circlar three groups: inside (orange areas in the right map), middle (deep blue, Hokuriku, Kumano and southern Ehime areas) and outside (light blue, white, Hachijō, part of Noto, Izumo and Kyushu areas) based on systems of accent, phoneme and conjugation.

Ainu language is the language which used to be spoken by the native people of the Hokkaidō region before Japanese settled there from Heian era to Meiji era. The influence of Ainu language to Hokkaido dialect is very little.

A notable linguistic feature of the Tōhoku dialect is its neutralization of the high vowels "i" and "u", so that the words sushi, susu (soot), and shishi (lion) are rendered homophonous, where they would have been distinct in other dialects. So Tōhoku dialect is sometimes referred to as "Zūzū-ben".

In addition, all unvoiced stops become voiced intervocalically, rendering the pronunciation of the word "kato" (trained rabbit) as [kado]. However, unlike the high vowel neutralization, this does not result in new homophones, as all voiced stops are pre-nasalized, meaning that the word "kado" (corner) is roughly pronounced [kando]. This is particularly noticeable with the "g" sound, which is nasalized sufficiently that it sounds very much like the English "ng" as in "thing", with the stop of the hard "g" almost entirely lost, so that ichigo 'strawberry' is pronounced [ɨzɨŋo].

The types of Tōhoku dialect can be broken down geographically:

The Kantō dialect has some common features to the Tōhoku dialect, such as "-be" and "-nbe" being used to end sentences especially Eastern Kantō dialect. Tokyo and the suburbs' traditional dialects are steadily declining because standard Japanese started spreading in Kantō earlier than in other areas.

Types of Kanto dialect include:

The dialects of western Japan have some common features that are markedly different from Eastern Japanese including the standard Tokyo dialect; for example, "exist [human/animals]" oru instead of iru, the copula ja or ya instead of da, and the negative form -n as in ikan ("don't go") instead of -nai as in ikanai. Western Japanese was the prestige dialect when Kyoto was the capital, so some features are used in literary language and archaic expressions of modern standard Japanese.

Kansai is the second most populated region in Japan after Kanto and the center of Japanese comedy, making Kansai dialect, especially that of Osaka, the most widely known non-standard dialect of Japanese. Kansai dialect is characterized as Kyoto-Osaka-type accent, strong vowel, copula ya, negative form -hen, etc.

Chūgoku dialect is separated into two groups by copula.

Types of Umpaku dialect include:

Umpaku dialect, unique from other dialects of Chugoku region, is superficially resembles Tohoku dialects and is thus also called "Zuu zuu ben". It has neutralization of the high vowels "i" and "u".

Sub-dialects of Hōnichi dialect include:

Miyazaki dialect is most noted for its intonation, which is very different from that of Standard Japanese and other Hōnichi dialect. At times it can employ a pattern of intonation seemingly inverse to that of Standard Japanese. Miyazaki dialect shares with Hichiku and Satsugū dialects similarities such as: と (to) replacing the question particle の (no).

Types of Hichiku dialect include:

Hakata-ben is the dialect of the Hakata of Fukuoka City. Throughout Japan, Hakata-ben is famous, amongst many other idiosyncrasies, for its use of "-to?" as a question, e.g., "What are you doing?", realized in Standard Japanese as "nani o shite iru no?", is "nan ba shiyotto?" or "nan shitōtō?" in Hakata. Hakata-ben is also being used more often in Fukuoka in television interviews, where previously standard Japanese was expected.

Tsushima-ben is a Kyūshū dialect spoken within the Tsushima Island of Nagasaki Prefecture. Tsushima dialect includes several words unintelligible to speakers from the other parts of Japan because Tsushima-ben has borrowed several words from Korean due to historical international exchanges and the geographical proximity of Korea. However Tsushima-ben shares most of its basic words with those of other Kyushu dialects.

Types of Satsugū dialect include:

Satsuma-ben, the dialect of Satsuma area of Kagoshima prefecture, is often called "unintelligible" because of distinct conjugations of words, significantly different vocabulary and pronunciation. As the farthest place from Kyoto, it is likely that divergences in dialect were accumulated in Satsuma making it sound relatively distinct. For example, the yotsugana (ジ, ヂ, ズ, ヅ), which are pronounced as 2 different phonemes in most dialects, are 4 separate phonemes in the Kagoshima dialect. There are several different dialect regions within Kagoshima prefecture.

A small group of dialects are spoken in Hachijōjima and Aogashima, islands south of Tokyo.

Usually Hachijō Dialect is regarded as an independent "root branch" itself for its unique characteristics, especially the abundance of inherited ancient Eastern Japanese features, in spite of its small population. The dialect has quite a lot of phrases that have been otherwise lost in the rest of Japan. Such phrases include まぐれる "magureru" instead of the modern 気絶する "kizetsu suru".

Instead of referring to inanimate and animate objects differently with aru and iru respectively like the majority of the mainland, the Hachijō Dialect does not distinguish between the two and uses aru for both cases.

There are quite a few words that the dialect has that differ in meaning than what they are normally used for in the rest of Japan. Below are some of these words.[4]

There is general agreement among linguists that the speech varieties of the Ryukyu Islands (the islands of Okinawa Prefecture and some of the islands of Kagoshima Prefecture) form a separate branch of the Japonic family known as the Ryukyuan languages.

There is great diversity within Japanese, and even greater diversity among the Ryukyuan languages. Many native speakers from one area of Japan can find the speech of another area virtually unintelligible. There has also developed in the Ryūkyūs a dialect called Okinawan Japanese which is close to standard Japanese, but which is influenced by Ryukyuan languages. For example, "deeji" may be said sometimes instead of "taihen", or "haisai" instead of "konnichiwa".