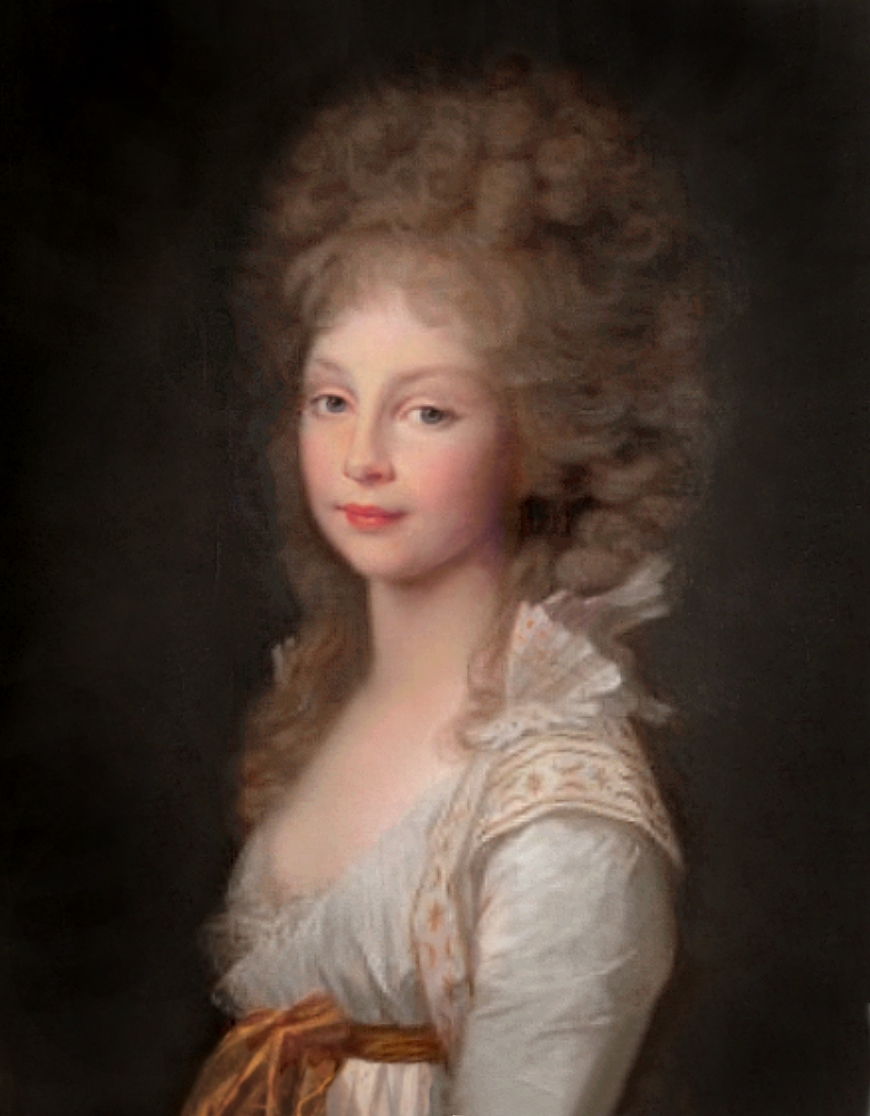 
Duchess Frederica of Mecklenburg-Strelitz (full name: "Frederica Louise Caroline Sophie Charlotte Alexandrine") (b. – d. ), Duchess of Cumberland and later Queen of Hanover, was the consort of , the fifth son and eighth child of George III and Queen Charlotte.

Her father assumed the title of Grand Duke of Mecklenburg on . Duchess Frederica was the niece of her future mother-in-law, Queen Charlotte (formerly Duchess ).

Frederica's mother died in 1782, after giving birth her tenth child. Two years later (1784), her father remarried with the younger sister of his deceased wife, , but this union ended only one year later, when Charlotte died of complications resulting from childbirth in 1785. Again a widower, Duke Charles think he can't give his daughters a properly care and education; for this, he send Frederica and her older sister sisters Charlotte, Therese and Louise with their maternal grandmother , Dowager Princess of Hesse-Darmstadt and called "Princess George" (in allusion to her later husband, the second son of ). She was a warm and cheerful person, and specially to Louise and Frederica -the younger sister- was the only mother who they really knew. The Princess George's choice of the swiss teacher should prove a good one. Some time later, Duke Charles also send his two surviving sons, the Hereditary Prince George and Charles to be raised by her grandmother.

In on , the Princesses of Mecklenburg-Strelitz "coincidentally" knew in the Prussian Theatre the King Frederick William II, who was inmediately cautivated by the grace and charm of Frederica and her sister Louise. Some weeks later, Frederica and Louise's father began the marriage negociations with the King: Louise with the Crown Prince Frederick William and Frederica with his younger brother Frederick Louis Karl (called Prince Louis, b. ).

The double engagement was celebrated in on . On Louise and the Crown Prince were married in the Royal Palace of ; two days later, on Frederica and the Prince Louis were also married in the same place. At difference to her sister, Frederica didn't had a happy union. Her husband preferred the company of his mistresses and neglected her; in response, the humiliated wife apparently began an affair with his husband's uncle Prince Louis Ferdinand, but these cannot be proved.

In 1795 the King Frederick William II appointed Louis as a Chief of the Dragoons Regiment No 1, who was stationed in , but one year, on , he died of . Frederica and her three children moved to the near Berlin.

In 1797 she and her cousin -fifth son of King George III of Great Britain by his wife Queen Charlotte (Frederica's paternal aunt)- were unofficially engaged. The Duke of Cambridge asked the consent of his father to the marriage, but the King, under the pressure of his wife, refused.

In 1798 Frederica became pregnant. The father was Frederick William, Prince of (b. ). The Prince recognized his paternity and asked her hand in marriage, which was quickly granted in order to avoid the inevitable scandal. On of that year, they were married in Berlin and inmediately they moved to . Two months later, in 1799 Frederica gave birth a daughter who lived eight months. The Prince of Solms-Braunfels, dissapointed and embittered, reasumed his old dissipated life and became an alcoholic. In 1805 he resigned from his military posts for "health reasons", and with this lost his income. Frederica had to mantain her family with her own resources after the refusal of her brother-in-law King Frederick William III to restored her the annual pension as a Dowager Princess of Prussia. Frederica's father-in-law, Prince William Christian Karl of Solms-Braunfels and his eldest son advised her to divorced, with their full approval. She and her husband refused.

In 1813, during a visit to his uncle Duke Charles in , Prince Ernest Augustus, Duke of Cumberland -the fourth son of King George III of Great Britain- met an fell in love with Frederica. Duke Charles let his daughter unmistakably know that her separation of the Prince of Solms-Braunfels is absolutely right and that he would see a marriage with the English prince a great opportunity to her. During the next months Frederica think about the intentions of Ernest Augustus and the possible effects on her own situation in peace. When after the victory of the allies in the Ernest Augustus spend some days in Neustrelitz, he was greeted friendly. Some time later Frederica asked to the Prussian King the approval to her divorce of the Prince of Solms-Braunfels. All parties agreed, included the Prince of Solms-Braunfels, whose sudden death on was considered by some too convenient, suspecting Frederica of poisoning her husband [Van der Kiste, p. 114] . In the engagement was officially announced. After the British Parliament had given his consent to the wedding, Frederica and Ernest Augustus were married on at the parish church of . Some time later, the couple travel to Great Britain and married again on at , .

Queen Charlotte bitterly opposed the marriage, even though her future daughter-in-law was also her niece. She refused to attend the wedding and advised her son to live outside of England with his wife. Frederica never obtain the favor of her aunt/mother-in-law, who died unreconciled to her in 1818. From her marriage to Ernest Augustus, she had a further three children, only one of whom survived &mdash; a son, who would become King .

, she can't inherited that throne. The next male heir of the late King was the Duke of Cumberland, Frederica's husband, who then become in King Ernest Augustus I of Hanover and Frederica in his Queen consort.

After a short illness, Queen Frederica of Hanover died in 1841 at . The Court master builder Georg Ludwig Friedrich Laves was instructed by the King to build a mausoleum for his wife and himself in the garden of the Chapel at Schloss . Besides, he gave royal orders for the transformation of a central square near the "Leineschlosses" and renamed in her honor as "Friederikenplatz".