The Ballad of Calico

The Ballad of Calico 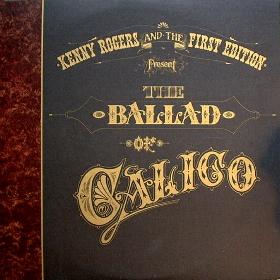 "The Ballad of Calico" was the eighth studio album by Kenny Rogers and the First Edition and released as 6476. It reached #118 on the albums chart and produced one single, "School Teacher" which reach #91. The album was released in . The album is a country-rock about the real-life town of . The entire double album was written by and Larry Cansler and the songs tell the stories of individuals who lived in the town.

The various members, not just Rogers, took lead vocals on the different songs, giving the album the sound of it coming from the characters themselves. A booklet with the album includes pictures of the group in period costumes, pictures of the town, and the lyrics written in long-hand with explanations by Murphey about the origins of the individual songs. As of March, 2007, the album remains out of print, though several songs from the album have been released on compilation LPs and CDs.

The album begins with the instrumental "Sunrise Overture" then goes into "Calico Silver" about a man leaving his farm after a drought to a take a job in the silver mines near the town of Calico. "Write Me Down" is about the people who were forgotten over time. "The Way It Used to be" is about day-to-day life in Calico. "Madame De Lil and Diaboilical Bill", the saloon keeper who scares her boyfriend out of town when she finds out he's stealing from her.

Side Two begins with "School Teacher", the teacher who faces being an old maid (The teacher, , was actually 20 years old at the time and married soon after she left Calico). "Road Agent", about a dead road agent. "Sally Grey's Epitaph" was based almost verbatim on a gravestone in the town cemetery. "Dorsey, the Mail-Carrying Dog", the dog who delivers mail for the disabled postmaster. This song has each member of the group bark like a dog (which is broken by them laughing). The last song suddenly ends with the last phrase "your carrying dog" cut off.

Side Three begins with the missing phrase appearing and immediately going into the first song, "Harbor for My Soul". "Calico Saturday Night" is an instrumental, followed by "Trigger Happy Kid" about a young boy who idolizes s. Side Three closes with "Vachel Carling's Rubilator", is about a man who creates some kind of new invention which takes over the town.

"Empty Handed Compadres" is about prospectors who returned without anything. "One Lonely Room" is about a man who never leaves the town after it becomes a ghost town. "Rockin' Chair Theme" is a brief instrumental leading into the next song, "Old Mojave Highway" about the road itself which crossed the desert (now the pathway of ). "Man Came up from Town" is about remains of early man later found in the mountains. The album closes with "Calico Silver (reprise)" in which the silver runs out and the town becomes a .