flag_type = Colonial flag of British Columbia (1870-71): British Blue Ensign and the great seal of the colony. 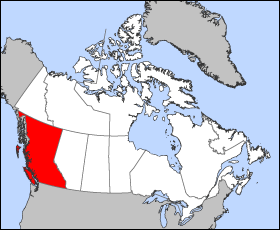 stat_year1 =
stat_area1 =
stat_pop1 =
political_subdiv=
footnotes = The United Colonies of Vancouver Island and British Columbia was the name informally given to the defacto amalgamation of the two crown colonies from 1866 until their incorporation into the in .

The had been created in to bolster British claims to the whole island and the adjacent , and to provide a North Pacific home port for the at Fort Victoria. By the mid-1850s, the Island Colony's non-indigenous population was between 500 and 1000 &mdash; a mix of mostly British, French-Canadian, Metis, Hawaiians, but with handfuls of Iroquoians and Cree in the employ of the fur company, and a few Belgian and French priests. Three years earlier, the Treaty of Washington had established the boundary between and the west of the along the . The mainland area of present-day , was an unorganised territory under British sovereignty until 1858. The region was under the defacto administration of the , and its regional chief executive, James Douglas, who also happened to be Governor of Vancouver Island. The region was informally given the name New Caledonia, after the fur-trading district which covered the central and northern interior of the mainland west of the Rockies.

All this changed with the of 1857-58, when the non-aboriginal population of the mainland swelled from about 150 Hudson's Bay Company employees and their families to about 20,000 prospectors, speculators, land agents, and merchants. The British colonial office acted swiftly, and the was proclaimed on August 2, .

Douglas administered the mainland colony in absentia, remaining in Victoria. British Columbia's colonial capital, New Westminster would welcome its first "resident" governor, , in 1864. Meanwhile Sir Arthur Kennedy had been appointed to succeed Douglas as Governor of Vancouver Island. Both colonies were labouring under huge debts, largely accumulated by the completion of extensive infrastructure to service the huge population influx. As gold revenues dropped, however, the loans secured to pay for these projects undermined the economies of the colonies, and pressure grew in for their amalgamation. Despite a great deal of ambivalence in some quarters, on August 6, , the united colony was proclaimed, with the capital and assembly in Victoria, and Seymour was designated governor.

Seymour continued as governor of the united colonies until 1869, but after the confederated four colonies into the in , it seemed increasingly only a matter of time before Vancouver Island and British Columbia would negotiate terms of union. Major players in the Confederation League such as , , and pushed for union primarily as a way of advancing both the economic health of the region, as well as increased democratic reform through truly representative and responsible government. In this effort, they were supported and aided by Canadian officials, especially Sir Samuel Tilley, a Father of Confederation and Minister of Customs in the government of Prime Minister . Seymour, ill and beset by protests that he was dragging in his feet in completing negotiations for the HBC's territory, was facing the end of his term, and Macdonald was pressing London to replace him with Sir Anthony Musgrave, outgoing governor of the . Before the appointment could be finalised, however, Seymour died.

With Musgrave's appointment, the British colonial secretary, Lord Granville, pushed Musgrave to accelerate negotiations with Canada towards union. It took almost two years for those negotiations, in which Canada eventually agreed to shoulder the colonies' massive debt and join the territory to a transcontinental railroad, to be finalised. His efforts led to the admission of British Columbia as the sixth province of Canada on , .

Governors of the United Colonies of Vancouver Island and British Columbia