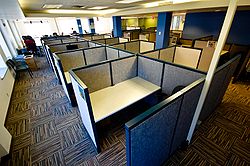 Cubicles in a former coworking space in Portland, Oregon

Тhe cubicle, cubicle desk, office cubicle or cubicle workstation is a partially enclosed workspace, separated from neighboring workspaces by partitions that are usually 5–6 feet (1.5–1.8 m) tall. Its purpose is to isolate office workers from the sights and noises of an open workspace, the theory being that this allows workers more privacy, and personalization, and helps them to concentrate without distractions. Horizontal work surfaces are usually suspended from the vertical partitions of cubicles, as is shelving, overhead storage, and other amenities. The office cubicle was created by designer Robert Propst for Herman Miller, and released in 1967 under the name "Action Office II".

Although cubicles are often seen as being symbolic of the human condition of working in a modern office setting due to their uniformity and blandness, they actually afford the employee a greater degree of privacy and personalization than was found in the previous work environment, which consisted of desks lined up in rows within an open room.[1][2]

The term cubicle comes from the Latin cubiculum, for bed chamber. It was used in English as early as the 15th century. It eventually came to be used for small chambers of all sorts, and for small rooms or study spaces with partitions which do not reach to the ceiling.

Like the older carrel desk, a cubicle seeks to give a degree of privacy to the user while taking up minimal space in a large or medium sized room. Like the modular desk of the mid-20th century, it is composed of modular elements that can be arranged in various ways with standard hardware or custom fasteners, depending on the design. Installation is generally performed by professionals, although some cubicles allow configuration changes to be performed by users without specific training. Cubicles are configurable, allowing a variety of elements such as work surfaces, overhead bins, drawers, and such to be installed depending on the user's needs.

In 1960 Herman Miller created the Herman Miller Research Corporation under the direction of Robert Propst, and the supervision of George Nelson.[1][2] Its mission was to solve problems related to the use of furniture, but not the furniture itself.[1][2] The corporation's first major project was an evaluation of the "office" as it had evolved during the 20th Century, and in particular, how it functioned in the 1960s.[1][2] Propst's studies included learning about the ways people work in an office, how information travels, and how the office layout affects their performance. Propst consulted with mathematicians, behavioral psychologists, and anthropologists.[1][2] Propst concluded from his studies that during the 20th Century the office environment had changed substantially, particularly in relation to the amount of information being processed.[1][2] The amount of information an employee had to analyze, organize, and maintain had increased dramatically. Despite this, the basic layout of the corporate office had remained largely unchanged, with employees sitting behind rows of traditional desks in a large open room, devoid of privacy. Propst's studies suggested that an open environment actually reduced communication between employees, and impeded personal initiative.[1][2] On this, Propst commented "One of the regrettable conditions of present day offices is the tendency to provide a formula kind of sameness for everyone."[1][2] In addition, the employee's bodies were suffering from long hours of sitting in one position. Propst concluded that office workers require both privacy and interaction, depending on which of their many duties they were performing.[1][2]

Propst and the Research Corporation developed a plan, which George Nelson's office executed in the form of the Action Office I (AO-1), and introduced it in the Herman Miller lineup in 1964.[1][2] AO-1 featured desks and workspaces of varying height which allowed the worker a freedom of movement, and to assume the work position best suited for the task.[1][2] AO-1 was ideally suited to small professional offices in which managers and employees often interacted using the same furnishings, but wasn't suitable for large corporation offices. In addition, it was expensive and difficult to assemble.[1][2] Despite its shortcomings, Nelson won the Alcoa Award for the design, neglecting to mention Propst's contribution.[1][2]

Following the poor sales of the AO-1, Propst and Nelson went back to the drawing board.[1][2] For several years, Propst and Nelson fought over a disagreement on the work environment best suited to the employee of a corporate office, and Nelson was eventually taken off the project.[1][2] With Nelson gone, Propst was free to indulge in his concept of an office capable of constant change to suit the changing needs of the employee, without having to purchase new furnishings, and allowed the employee a degree of privacy, and the ability to personalize their work environment without impacting the environment of the workers around them.[1][2] Propst recognized that people are more productive within a territorial enclave that they can personalize, but also require vistas outside their space.[1][2] Propst's concept was the "back-up", a two- or three-sided vertical division that that defined territory and afforded privacy without hindering the ability to view or participate in surrounding activities.[1][2]

AO-2 was based around the mobile wall unit that defined space.[1][2] The unit also supported multiple workstation furnishings, which benefited from the vertically-oriented work space.[1][2] The components were interchangeable, standardized, and simple to assemble and install. More importantly, they were highly flexible, allowing the company to modify the work environment as needs changed.[1][2]

The AO-2 lineup was an unprecedented success, and was quickly copied by other manufacturers.[1][2] In 1978, "Action Office II" was renamed simply "Action Office", and by 2005 had attained sales totaling $5 Billion.[2]

The first offices to incorporate the "Action Office" design were in the Federal Reserve Bank of New York, which contracted with George Nelson and Herman Miller in 1963 to design an innovative office space that could maximize efficiency in a small area. The result was based on Nelson's CPS (Comprehensive Panel System), and featured "pods" of four cubicles arranged in a swastika pattern, each with an "L" shaped desk and overhead storage. Surviving photos of the Federal Reserve Bank offices reveal a design that would not appear much different from a cubicle of today.[3]

In 1964 this design was re-used for the Woman's Medical Clinic of Lafayette, Indiana. Nelson also used the design in his own New York design offices.[3]

On the positive side the cubicle desk offers options for customization by its users which is not comparable to other desk forms, past or present. It can transform all of the walls surrounding the white-collar worker into productive work surfaces, or nooks for personal expression. Because the walls are within reach, and because many of them offer holes and hooks for hanging small shelves, bulletin boards or other accessories, elements which were once placed only on the horizontal surface of the desktop can be moved to the vertical surfaces. While cubicle desk makers usually employ proprietary standards for their fasteners and accessory hooks, this has not stopped the makers of small-scale desktop accessories from producing and marketing myriad pen holders, magazine racks, and such which fit popular brands of cubicle partitions.

Note that it is also possible to create a cubicle-filled office environment without the use of cubicle desks by combining traditional free-standing desk forms like the pedestal desk with special types of free-standing partitions. This kind of environment is often part of a general office landscaping effort which was popularized in the 1950s and the 1960s in Germany and the United Kingdom.

Explorations of the cubicle form

An office filled with cubicles is sometimes called a cube farm. Although humorous, the phrase usually has negative connotations. Cube farms are often found in high-tech companies, but they also appear in the insurance industry and other service-related fields. Many cube farms were built during the dotcom boom. A popular slang used frequently in offices, mainly in the greater New York City area, is "Stop my cube", which refers to the action of "swinging by" or holding a meeting within a cube.

Some interesting R&D has been going on in the field of cubicles at the turn of this millennium. One of the most sarcastic critics of the cubicle has been Scott Adams, speaking through his comic strip, Dilbert. In 2001 he teamed up with the design company IDEO to create "Dilbert's Ultimate Cubicle".[4] It had some whimsical aspects but there were also some very sound design ideas such as an original modular approach and attention to usually neglected ergonomic details like the change in light orientation as the day advances. Similarly, Douglas Coupland has coined the phrase "veal-fattening pen", a deprecation of cubicles in his novel Generation X: Tales for an Accelerated Culture.

Between 2000 and 2002, IBM partnered with the office furniture manufacturer Steelcase, and researched the software, hardware, and ergonomic aspects of the cubicle of the future (or the office of the future) under the name "BlueSpace". They produced several prototypes of this hi-tech multi screened workspace and even exhibited one at Walt Disney World. Bluespace offered movable multiple screens inside and outside, a projection system, advanced individual lighting heating and ventilation controls, and a host of software applications to orchestrate everything.

In 1994 designer Douglas Ball planned and built several iterations of the Clipper or CS-1, a "capsule" desk looking like the streamlined front fuselage of a fighter plane. Meant as a computer workstation, it had louvers and an integrated ventilation system, as well as a host of built-in features typical of the ergonomic desk. An office space filled with these instead of traditional squarish cubicles would look like a hangar filled with small flight simulators. It was selected for the permanent design collection of the Design Museum in the United Kingdom.

It is unlikely that any other office furnishings have had as great a social impact as the introduction of the office cubicle in the 1960s, though the outcome of the cubicle's arrival is still open to debate, in both its pros and cons. Author Thomas Hine has gone so far as to speculate that the cubicle made it possible for women to move into middle management positions in the late 1960s because the introduction of cubicles gave their male counterparts a new office environment in which to place women managers without having to allow their entry into the private "bull pens" that had been the exclusive domain of men.[5]

Despite becoming Herman Miller's most successful project, George Nelson disowned himself from any connection with the "Action Office II" line.[3] In 1970 he sent a letter to Robert Blaich, who had beome Herman Miller's Vice-President for Corporate Design and Communication, in which he described the system's "dehumanizing effect as a working environment." He summed up his feeling by saying:

One does not have to be an especially perceptive critic to realize that AO II is definitely not a system which produces an environment gratifying for people in general. But it is admirable for planners looking for ways of cramming in a maximum number of bodies, for "employees" (as against individuals), for "personnel," corporate zombies, the walking dead, the silent majority. A large market.[3]

Scornful as he may have been, Nelson was right that there turned out to be a "larger market" for AO II. By 2005 total sales had reached $5 billion.[3]