I Wanna Hold Your Hand (film)

I Wanna Hold Your Hand (film) 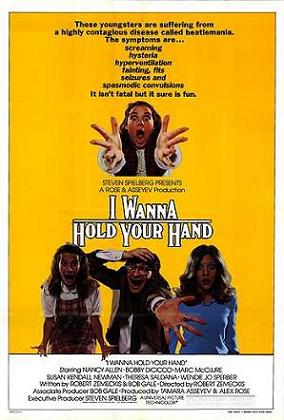 "I Wanna Hold Your Hand" is a directed and co-written by that takes its name from the 1963 song. It was produced and co-written by . The film is about "" and is a fictionalized account of the day of the Beatles' first appearance on the (February 9, 1964). It was released in by .

The movie was Robert Zemeckis' directorial debut. Even though the film was modestly budgeted, in order to convince Universal to bankroll the film, Steven Spielberg had to promise studio executives that, if Zemeckis was seen to be doing a markedly poor job, he would step in and direct the film himself. [Shone, Tom. "Blockbuster: How Hollywood Learned To Stop Worrying And Love The Summer". New York: Free Press, 2004. p. 125. ISBN 0-7432-3568-1 ]

The time is 1964, are about to go on the for the first time. Girls are fainting during their concerts from sheer excitement at being in the same theater with them. Pam Mitchell () is about to get married but wants to bed one of the guys before she does. Rosie Petrofsky (), a very huge fan, just wants to be in the show with her idols, and Grace Corrigan (), is certain that if she can get some exclusive photos of The Beatles, her career as a photographer will be secured.

The film's soundtrack also features a total of 17 original Beatles recordings. They are:

The song "She Loves You" was featured twice toward the end of the film. The first time was during the group's appearance on The Ed Sullivan Show on Sunday - February 9th, 1964. For this sequence of the film, stand-in Beatle-lookalike doubles, dressed in identical attire and holding the same type of musical instruments in a similar manner, were seen mimicking the group's performance of the song from that show while being shown on the stage floor, albeit from a distance so as not to see their identities, while the actual footage of The Beatles on The Sullivan Show of 02/09/1964 was revealed from the camera operator's point-of-view. These two elements were combined together, along with reactions from the studio audience to recreate a brilliant moment in time. The second time "She Loves You" was featured occurred during the film's end credits.

Other songs by the Beatles, that were to be published years after their appearance on The Ed Sullivan Show, are referenced as in-jokes throughout the film. They are:
# "Helter Skelter", mentioned by an aristochratic woman who sojourns at the Beatles' hotel ("Things are all helter skelter!");
# "Get Back", mentioned by a cop trying to calm a riot against his arrest of a very young Beatles' fan ("Get back girls, get back!");
# "", "909" being the number of the hotel room of a man who is searching for a hooker in New York;
# "", in the name of "Pam Mitchell", the girl that manages to sneak inside the Beatles' room and then has fetishistic behaviours towards objects and musical instruments belonging to the group. "Polythene Pam" was inspired by an evening that John spent with poet Royston Ellis and his girlfriend, Stephanie. The three wore polythene (a common British contraction of the word and the version of the word ) bags and slept in the same bed out of curiosity about kinky sex.
# "", mentioned by a member of the Beatles' staff named Neil (probably a reference to the Beatles' and ) while speaking to a cop after Pam has been discovered lying under 's bed ("Is that the bird that was under Lennon's bed?", a reference to a widespread interpretation that sees in "Norwegian Wood (This Bird Has Flown)" a confession of adultery).
# "Girl", once again during the scene in which Pam is discovered: the cop doesn't get the aforementioned "bird" allusion, and Neil promptly states: "Girl"; to make this reference even clearer, the cop answers: "Girl, girl" (mimicking the chorus of the song). Noticeably, as the dialogue goes on, Neil speaks about an arrangement he made with Brian (a reference to the real Beatles' manager ) concerning how to handle the situation with the press.