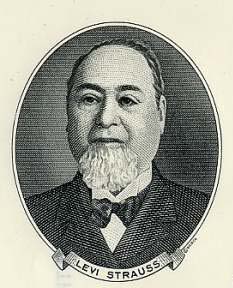 Levi Strauss, born Löb Strauß, (, - , ), was a German- immigrant to the [ [http://www.gzg.fn.bw.schule.de/schulen/emigrate/dokument/persons/strauss/nchs/strauss.htm Levi Strauss ] ] who founded the first company to manufacture . His firm, Levi Strauss & Company, began in 1853 in .

Levi Strauss was born in , to Hirsch Strauss and his wife Rebecca (Haas) Strauss. His parents named him Löb, but he changed it to Levi after he came to the . [ [http://www.germanheritage.com/biographies/mtoz/strauss.html German American Corner: STRAUSS, Levi (1829-1902) ] ]

At the age of 18, Strauss sailed for the to join his brothers Jonas and Louis, who had begun a dry goods business in . His mother and two sisters came with him. By 1850, Strauss was already calling himself Levi.

In 1853, Strauss became an American citizen. [Downey, L. "Levi Strauss: A Short Biography", 2005 (accessed at [http://www.levistrauss.com/Downloads/History_Levi_Strauss_Biography.pdf] on April 6, 2007)] He moved to , where the was still going on. Strauss expected the miners would welcome his buttons, scissors, thread and bolts of fabric. He also brought along , intended to make tents and covers for the s many miners lived out of.

Strauss opened his dry goods business as He often led his , heavily laden with merchandise, to the mining camps in the Gold Rush country.Fact|date=December 2007 He learned that prospectors and miners complained about their cotton trousers and pockets tearing too easily. A tailor named decided to make rugged s to sell to the miners.Fact|date=December 2007 Fashioned from brown sailcloth made from hemp, his trousers has ore storage pockets that were nearly impossible to split.Fact|date=December 2007 Davis wanted to register a patent, but lacked money. Strauss agreed to help him and they went into partnership.

Strauss died in 1902 at the age of 73. He was buried in Colma. Strauss had never married and left his thriving business to his nephews Jacob, Louis, Abraham and Sigmund Stern. They rebuilt the company after the 1906 San Francisco earthquake and fire. The following year, Jacob Davis sold back his share of the company.