Screenshot of the first level in Lynx CC

Chip's Challenge is a tile-based, puzzle video game for several systems, including the hand-held Atari Lynx, Amiga, Commodore 64, ZX Spectrum,[1] DOS, and Windows (included in the Microsoft Entertainment Pack and Best of Microsoft Entertainment Pack). It has also been ported to the TI-84+ calculator and the TI-89 Titanium.[2] The original game was designed by Chuck Sommerville, who also made about a third of the levels.[3] Most of the conversions from the Atari Lynx original to other formats were carried out by Images Software of Fareham.

The premise of the game is that high-school nerd Chip McCallahan has met Melinda The Mental Marvel in the school science laboratory and must navigate through Melinda's "Clubhouse" (a series of increasingly difficult puzzles) in order to prove himself and gain membership to the very exclusive Bit Buster Club.

The games consists of a series of 148 two-dimensional levels (149 in Microsoft's version) which feature the player character, Nerdy Chip McCallahan,[4] often called just Chip, and various game elements such as computer chips, buttons, locked doors, water and lethal monsters. Gameplay involves using arrow keys, directional pad or mouse to move Chip about each of the levels in turn, collecting enough chips to open the chip socket at the end of each level, get to the exit, and move on to the next level.

Levels can be skipped by entering an appropriate four-letter non-case-sensitive password. For the PC versions, game progress is automatically saved. On the Windows version of the game, the passwords can easily be cracked, thus making it easy to skip levels without playing; if one is having a lot of trouble with a level, the game allows the player to skip to the next level. The Microsoft version has another, hidden, option, "Ignore Passwords", that appears in the Game menu when one of several key combinations is pressed, including Control-D.

In the Lynx version of the game, entering the password "MAND" gives the player access to an Easter egg: a Mandelbrot set and a Julia set fractal plotter.[5]

While the same set of rules applies to each level, there are many different kinds of levels. Some are action-oriented and some are puzzle-oriented. Most levels have a time limit. Types of levels include:

The first eight levels are "lesson levels" or tutorial levels.

Level 34, CYPHER, has the passwords to some later levels hidden in its layout.

The ending sequence plays on completion of level 144. There are, however, four (five in the Microsoft version) levels beyond this which can only be reached by password. On completion of level 149 the ending sequence plays again. The password for level 146 is hidden in the earlier level CYPHER, but level 145 (which is only present in the Microsoft version) can only be reached by cracking or guessing the password, which is "TONY", or using the cheat code (Ctrl-K) which unlocks all levels.

For the Windows version, the game's soundtrack features two looping midi tracks titled "chip01.mid" and "chip02.mid". If "canyon.mid" is found in the Windows directory, the game will alternate among the three songs.

The success of Microsoft's version eventually led Chuck Sommerville to create a sequel, Chip's Challenge 2, usually abbreviated to "CC2". CC2 included many new kinds of elements and many new levels in addition to the original ones. However, the game has never been released to the public, as Sommerville and the copyright holder of the game could not agree on terms. On July 30, 2006, in a posting to the annexcafe.chips.challenge newsgroup, Sommerville stated, "Never give up hope that CC2 will be released, I am continuing to explore opportunities.[6] ". Currently Chuck Sommerville is involved in Chuck's Challenge.

An informal Internet community of players has developed around the game, particularly the Windows version, producing text, map, and video walkthroughs, FAQs, level editors and screenshots of the game. Most members of the community reside on Usenet at news://news.annexcafe.com/annexcafe.chips.challenge or alternately http://chips.kaseorg.com/ . Chuck Sommerville also posts there. They have produced a second set of 149 levels for the Windows version of the game with the name "CCLP2" (an abbreviation of "Chip's Challenge Level Pack 2") featuring contributions by a large number of people. This version is considered the unofficial sequel in place of CC2.

Other unofficial software produced by them include:

Chuck's Challenge[8] has been released by Niffler, which Chuck Sommerville is founding member of. Sharing similar gameplay, enemies, and puzzles to Chip's Challenge, it is Chuck's way of creating a new Chip's Challenge game without violating copyright. The premise is that Sommerville, the creator of Chip's Challenge, has been summoned by an alien called Woop to create video games for them to play.

The game features 100 levels, multi-player racing, weekly puzzles and a built-in level editor. Chuck has stated that if it does well, he would like to release other platform versions as well such as PC, Mac & Android. Version 1.0 was released on December 17 2010 on the App Store for the iPhone, iPod Touch, and iPad.

WebCC is one of the most notable emulators. The website hosts a full suite of completely free and online map packs with user-generated levels and a forum for submitting new tile ideas. WebCC also has versions for the iPhone, iPod Touch, and iPad for sale in the App store. 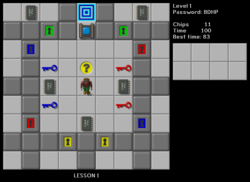 Tile World is a game designed to emulate Chip's Challenge. It was written by Brian Raiter in platform-neutral C and SDL. To avoid copyright infringement with Chip's Challenge, the game does not use the original graphics, sound, or music.[9]

Tile World has two rulesets intended to emulate two different implementations of Chip's Challenge: the Microsoft Windows implementation and the Atari Lynx version. The two rulesets have many differences: Under the Microsoft ruleset, the player and monsters move one tile at a time, in effect disappearing from their current locations while simultaneously appearing on their destination locations, without any between-tile animation frames to smooth out the movement. Many bugs from the Microsoft implementation are also emulated, in order for scores obtained from Tile World to be consistent with that implementation. With the Lynx ruleset, all objects move smoothly from one tile to the next. The Lynx and MS rulesets also have a variety of subtle differences in how monsters and other game elements work. For instance, in the original Lynx version, most monsters avoid fire; in the MS version, most monsters enter the fire and die. In addition, in the Lynx ruleset only a restricted subset of tile objects, which include Chip, monsters and blocks, are allowed to coexist with other tiles at the same location (e.g. Chip on ice). The Microsoft implementation however uses two layers of tiles, therefore allowing all possible combinations of 2 tiles to coexist in one location, as can be seen in many fan-made levels. The Lynx ruleset does allow some things the actual Lynx implementation of the game does not, such as arbitrary connections of buttons to traps and clone machines (in the actual Lynx game the connections are made implicitly based on positions of the buttons and objects), a concept borrowed from the Microsoft implementation.[10]