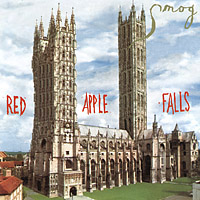 "Red Apple Falls" is Smog's sixth album, released in 1997. It was recorded by Jim O'Rourke and Bill Callahan, with assistance from . It is the first of two Smog-records (the second being the follow-up "Knock Knock") produced by O'Rourke. He also played bass, piano, hammond, hurdy gurdy and drums.

"" was released as a single. "Red Apples" was featured in an early version on Callahan's first EP ("Floating", 1991) and was later covered by Chan Marshall for her album "". "I Was a Stranger" was redone by Callahan for the 2000-EP "". Additionally, As a collaboration project the two German labels and released a split single subtitled "A Tribute to Smog" in 2003, with covering "I Was a Stranger" and covering "Ex-Con".