SRM University (Sri Ramaswamy Memorial University) is a co-educational private university from the state of Tamil Nadu, India. It was founded in the year 1985 as SRM Engineering college in Kattankulathur, under Anna University. The university now has four campuses in Tamil Nadu (Kattankulathur, Ramapuram, Vadapalani and Trichy), one in Modinagar, near Delhi. The institute gained deemed status in the academic year 2003-04, and was renamed SRM Institute of Science and Technology and subsequently, SRM University in 2006 when it attained the status of a full-fledged university, under section 3 of the UGC Act 1956.[2] 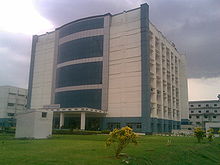 The Indian Bank, City Union Bank, SRM Hotel, which includes swimming pool and bar facilities, and the Royal Inn Restaurant are on the campus. The various blocks within SRMIST include, SRM General Hospital, SRM Medical College, SRM Kattankulathur Dental College, SRM Arts & Science College, SRM Polythenic College, Valliammai Engineering College, Valliammai Polythenic College, the PG Block, the Hi-Tech Block, the Main Block, the Mechanical Block, the Mech PG Block, the Electrical Sciences Block, the Computer Science Block, the Biotech block, IT Park (15 floors), an Auditorium (4500-seat capacity), MBA block, MBA library along with a Central Library with an Internet Cafe and a Cafeteria. There are also about half a dozen hostels. Work is going on on the construction of a University Building of 15 floors in which already the Central Library of 4 floors has been opened. Work is being done towards the completion by the end of 2011. A Multipurpose Indoor Stadium with an expenditure of around Rs.17.6 crore has been proposed and the ground work has been started by Shri Abhinav Bindra last year when SRM University offered a Doctorate to him.

The dental college currently occupies this quaint and serene campus. Consisting of five academic blocks spread over 25 acres (100,000 m2), this enclave provides the facilities and infrastructure necessary for medical and health sciences students to pursue their programs. The campus houses the Faculty of Engineering & Technology and Easwari Engineering College.

Considered the smallest of the SRM campuses and in the heart of Chennai city, this campus has a fairly good infrastructure and houses the faculty of engineering and technology, faculty of management sciences, faculty of MCA and the Sivaji Ganesan Film Institute. 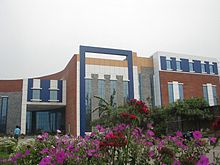 The campus is spread over many acres of lush green lawn environment at Modinagar on Delhi-Merrut highway. The academic building accommodates various teaching activities, include personality development and communication skills.

SRM setup a medical College on the outskirts of Trichy in 2008. It is located in Siruganur, on the Trichy-Chennai highway at a distance of 28 km from Tiruchirappalli.

For all programs: 60% aggregate in Mathematics, Physics & Chemistry & For Bioinformatics, Biomedical Engineering, Bioprocess Engineering, Food Process Engineering, Biotechnology and Genetic Engineering: Minimum 60% aggregate in Biology, Physics and Chemistry. Also the candidate has to appear for SRMEEE (SRM Engineering Entrance Exam) which is an all India entrance test conducted by the university annually in the month of may for the uptake of students in all the B.Tech Programs offered by the university. The students are then invited on all India rank basis for counselling where a student can select a program of his/her choice.

B.Arch.
Admission to the B.Arch program is based on the aggregate of marks secured in the qualifying examination & the NATA score.Meritorious candidates are selected by giving 50% weight age to aggregate of total marks secured in qualifying examination & 50% weight age to NATA score.Admissions are granted based on the rankings.

B.Des.
Admission to B.Des program will be purely on the basis of performance in the Higher Secondary examination. Candidates short listed based on their Higher Secondary marks will be offered admission directly.

M.Tech.
Admission to this program will be on the basis of performance in the Entrance Test conducted by SRM University. However candidate with valid GATE score can also apply and will be considered for admission. Merit list will be prepared and candidates will be called for counseling.

M.S.
The Admission Committee will decide on the procedure for conducting the interview for eligible candidates, as decided by the committee from year to year, and the percentage of marks obtained in specified subjects of the qualifying examinations will be considered.

The Admission Committee will prepare a merit list and offer admissions through counseling, taking into account the professional experience of the candidate and the number of seats available.

M.S. (Nanoscience and Nanotechnology)
Admission to this program will be on the basis of marks obtained in the qualifying examination. Merit list will be prepared and candidates will be called for counseling.

M.C.A.
Admission to this program will be on the basis of marks obtained in the qualifying examination. Candidates, on the basis of the merit list, will be called for counseling at SRM University for final Admission.

SRM university is known for its programs in Science (Engineering And Medicine) and Management. The programs are rated among top education programs in the country.

[3][4] Around 104 students were selected for this Semester Abroad Program (SAP) in 2008.[1] [2] A few were offered scholarships while most of the students were supported by their family, during their time abroad.

Research and development is of paramount importance at SRM University and it boasts of a state-of-the-art nanotechnology laboratory. Students are encouraged to think independently and are inspired by the able and experienced faculty to author research papers in their field of interest. Unlike most colleges in India, emphasis is given to overall development of students rather than just academic ability. The close proximity of the technology and biology/medical faculties helps in the research and development works in new fields that fall in the intersection of biology and engineering streams (biotechnology, genetic engineering, biomedical engineering etc)

On 12 October 2011 the Indian Space Research Organisation (ISRO) announced successful launch of SRMSAT,[6] a nanosatellite designed and created by a group of 50 students from the SRM University under the guidance of ISRO scientists.[7] The satellite weighs just 10.4 kilograms (23 lb) and was created at a cost of

Each academic year is divided into two semesters. Each semester has three internal exams and one final exam (semester exam) for all theory subjects. For laboratory courses there is usually one internal exam followed by the final exam.Most of the exams are theoretical and like most other engineering colleges in India.

The university is approved by the University Grants Commission and is accredited by the National Assessment and Accreditation Council (NAAC).[8] It has been given an overall grade of B+ by NAAC.[citation needed]