In archery, the shape of the bow is usually taken to be the view from the side. It is the product of the complex relationship of material stresses, designed by a bowyer. This shape, viewing the limbs, is designed to take into account the construction materials, the performance required, and the intended use of the bow.

If a limb is 'straight' its effective length remains the same as the bow is drawn. That is, the string goes directly to the nock in the strung (braced) position. When the limb is recurved (tip of limb away from the archer)the string touches the limb before it gets to the nock. The effective length of the limb, as the draw commences, is therefore shorter. However, as the bow is drawn, the recurve 'unwinds', the limb becomes effectively longer, and the mechanical advantage of the archer increases. Counter to this, stresses are building up in the materials of the limb. The belly of the bow (nearest the archer) is in compression, the back (furthest away from the archer) is in tension, and the line between is in shear. The materials must withstand these stresses, store the energy, and rapidly give back that energy efficiently. The amount of energy stored is determined by the stresses withstood and the shape of the limb, from the unstrung position to strung (consider as pre-stressed), then de-formed further to full draw as the recurve unwinds. These basic principles of changing mechanical advantage, to efficiently store more energy, and deliver it to accelerate the arrow, were clearly understood in antiquity, as shown by the examples that follow.

Many bows, especially traditional self bows, are made approximately straight in side-view profile. They are generally referred to as straight, despite the minor curves of natural wood and the "set" or curvature that a wooden bow takes after use. When the archer commences the draw, mechanical advantage is at is greatest and the bow limbs are only pre-stressed to the strung position; therefore drawing weight is at a minimum. However, the drawing weight rapidly increases because mechanical advantage reduces (consider the string is pulling more and more directly on the limbs) and stresses are building up in the limbs. Consequently, drawing weight 'stacks' (very rapidly increases). On release, the reverse happens, the arrow is accelerated by maximum force, and this force rapidly decreases. Hence, the arrow must be strong(heavy?) enough to withstand such acceleration and, as the string may decelerate, it is possible for the arrow to leave the string prematurely, which is inefficient.

Historical and current use

Longbows as used by English Archers in the Middle Ages at such battles as Crecy and Agincourt were straight limb bows. Usually made of yew, these bows were used to great effect by many archers shooting together in massed volleys. The arrows were long and heavy ('clothyard shafts') with armour piercing 'bodkin' heads. Practice for such long range warfare survives today in a Clout Shoot, named after a type of shirt. Also, there are a number of clubs or societies where the archers prefer the use of a longbow, primarily for its history.

A recurve bow has tips that curve away from the archer when the bow is strung. By definition, the difference between recurve and other bows is that the string touches a section of the limb when the bow is strung. A recurve bow stores more energy and delivers energy more efficiently than an equivalent straight-limbed bow, giving a greater amount of energy and hence speed, to the arrow. A recurve will permit a shorter bow than the simple straight limb bow for a given arrow energy and this form was often preferred by archers in environments where long weapons could be cumbersome, such as in brush and forest terrain, or while on horseback.

Recurved limbs also put greater strain on the materials used to make the bow, and they may make more noise with the shot. Extreme recurves make the bow unstable when being strung. An unstrung recurve bow can have a confusing shape and many Native American weapons, when separated from their original owners and cultures, were incorrectly strung backwards and destroyed when attempts were made to shoot them.[1]

Historical and current use

Recurve bows made out of composite materials were used by, among other groups, the Scythians, Hyksos, Magyars, Huns, Greeks, Turks, Mongols, and Chinese. The recurve bow spread to Egypt and much of Asia in the second millennium BC. Presumably[citation needed] Greek and Phoenician influence would have introduced the recurve form to the rest of the Mediterranean region. The standard weapon of Roman imperial archers was a composite recurve, and the stiffening laths (also called siyah in Arabic/Asian bows[2] and szarv (horns) in Hungarian bows) used to form the actual recurved ends have been found on Roman sites throughout the Empire, as far north as Bar Hill on the Antonine Wall in Scotland.[3] During the Middle Ages composite recurve bows were used in the drier European countries; the all-wooden straight longbow was the normal form in wetter areas. Recurve bows depicted in the British Isles (see illustrations in "The Great War Bow")[4] may have been composite weapons, or wooden bows with ends recurved by heat and force, or simply artistic licence. Many North American bows were recurved, especially West Coast bows. Recurve bows went out of widespread use, for war, with the availability of effective firearms. Self bows, composite bows, and laminated bows using the recurve form are still made and used by bowyers and amateur and professional archers.[5][6][7][8] 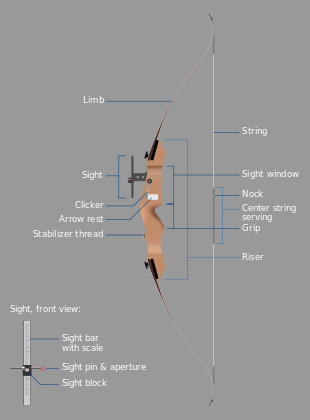 The unqualified phrase "recurve bow" or just "a recurve" in modern archery circles usually refers to a typical modern recurve bow, as used by archers in the Olympics and many other competitive events. It employs advanced technologies and materials. The limbs are usually made from multiple layers of fiberglass, carbon and/or wood on a core of carbon foam or wood. The riser (the centre section of the bow) is generally separate and is constructed from wood, carbon, aluminium alloy or magnesium alloy. The term 'riser' is used because, in a one-piece bow, the centre section rises from the limbs in a taper to spread the stress. Several manufacturers produce risers made of carbon fibre (with metal fittings) or aluminium with carbon fibre. Risers for beginners are usually made of wood or plastic. The synthetic materials allow economic, predictable manufacture for consistent performance. The greater mass of a modern bow is in itself an aid to stability, and therefore to accuracy. See Archery

The modern recurve is the only form of bow permitted in the Olympics (though the Compound bow is permitted in some categories at the Paralympic Games) and is the most widely used by European and Asian sporting archers.

The modern Olympic-style recurve is a development of the American Flatbow, with rectangular-section limbs that taper towards the limb tips. Most recurves today are "take-down" bows—that is, the limbs can be detached from the riser for ease of transportation and storage, and for interchangeability. Older recurves and some modern hunting recurves are one-piece bows. Hunters often prefer one-piece bows over take-down bows because the limb pockets on take-down bows can be a source of noise while drawing.

A simple left-handed recurve bow, to be held in the right hand. It is in one piece, unlike the modern recurve bow (above); unlike a composite bow it has flat limbs with fiberglass on front and back, and a sculpted handle.

Archers often have many other pieces of equipment attached to their recurve bows, such as:

Reflex bow, the design similar to the Mongol bow, the primary weapon used by Mongol armies

A reflex bow is a bow that has curved or curled arms that turn away from the archer throughout their length. When unstrung, the entire length of the bow curves forward from the belly (away from the archer), resembling a "C"; this differentiates a reflex bow from a recurve bow in which only the outer parts of the limbs turn away from the archer. The curves put the materials of the bow under greater stress, allowing a fairly short bow to have a high draw weight and a long draw length. The materials and workmanship must be of high quality. Highly-reflexed bows are more difficult to string and may reverse themselves suddenly; they have seldom been used for hunting. However, they were the main armament of the Mongol armies that conquered much of Asia and Europe; their short profile compared to longer bows made them ideal for horseback use.

Bows of traditional materials with significant reflex are almost all composite bows, made of the classic three layers of horn, wood, and sinew; they are a variant of the recurve form normally used for such bows. Highly reflexed composite bows are still used in Korea and were common in Turkish and Indian traditional archery.

There is an interesting section in Homer's Odyssey when the suitors attempt to string Odysseus' bow and are unable to do so, whereas Odysseus is able to string it without standing up. A reflex bow is almost impossible to string unless one knows the technique and is easiest to string from a sitting position. This passage has been suggested as evidence that reflex bows were just beginning to spread into the Aegean area at the time of writing.

A decurve bow is a bow that has arms curved or curled at the ends to turn towards the archer. This bow form reduces the strain on the bow when it is used, and the bow may be under no tension at all when strung, so that it can be kept ready for immediate use at all times. It also reduces the energy stored in the bow, and the speed of the arrow. The form is seldom used in modern or historical bows, but was occasionally used by groups such as the Mohave who did not have easy access to good quality bow wood. It allowed them to make effective hunting weapons from the poor-quality material available.

A deflex bow is a bow that has arms curved or curled at the base, to turn towards the archer when unstrung. This bow form reduces the strain on the limbs and also the energy stored by the weapon. Most modern recurve bows are built with some degree of deflex. It has been used occasionally in traditional bows, for example to make a bow that looks like a traditional hornbow without using any actual horn.

The compound bow, not to be confused with a composite bow, has a quite specific shape, with straight composite limbs fitted with eccentric cams at the moving ends. The high efficiency and performance comes from the shape of the cams. See Compound bow

A "pyramid" bow from the front

Bows usually taper from the handle to the tips. Tapering reduces mass in the outer limb and dissipates the limb stresses; this increases the speed at which the tips move which propels arrows faster. Shapes may be optimized for various purposes, especially maximum speed of the arrow; the details are the subject of active research.

Narrow bows normally taper uniformly. However, the taper of flatbows varies. The working limbs of "paddle" bows maintain width for almost the entire limb length, "pyramid" bows taper uniformly from the handle to a narrow tip, and "Holmegaard-style" bows remain full width to about two-thirds of the way along the limb, then narrow sharply. "Eiffel Tower" bows taper sharply, but smoothly, to a very narrow outer tip.

The optimal cross-section of the bending section of a bow limb is rectangular, and almost all modern bows have such limbs. However, many, perhaps most, traditional bows have had a cross-section closer to circular, with every possible variation being used at some point. Current definitions of the traditional longbow require approximations of a D-shaped cross section.