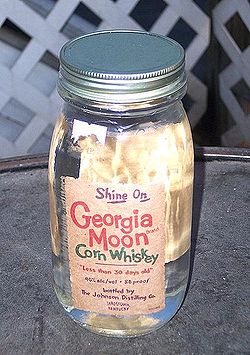 Corn whiskey is an American liquor made from a mash made of at least 80 percent corn.

The whiskey is typically run off to high proof and cut to not less than 40 percent alcohol by volume. It does not have to be aged; but if so, it is aged in new uncharred oak barrels or in barrels previously used for aging Bourbon. Aging usually is brief, six months or less, during which time the whiskey picks up color and flavor from the barrel while its harshness is reduced.