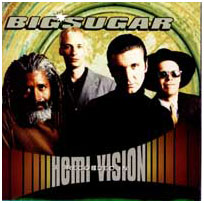 "Hemi-Vision" is an album by Canadian blues-rock band , released in 1996.

The primary singles from the album were "Diggin' a Hole", "If I Had My Way" and "Opem Up Baby". The band also recorded a version of "Opem Up Baby", entitled "Ouvres-toi Bébé", for radio airplay in (see also "").

1 This track was labelled as "Opem Up Baby" on the CD cover, although both the lyrics and the French version, titled "Ouvres-toi bébé", indicate that the intended meaning was "open". It is not known if this was a spelling error on the cover art or an intentional use of , but both "Opem" and "Open" have been cited as the song's title by different reference works. The band's own website, however, uses the "opem" spelling, as does the 2003 greatest hits compilation "Hit & Run", lending credence to the idea that it was intentional.