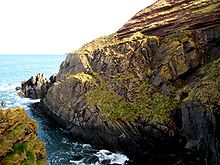 The Old Red Sandstone is a British rock formation of considerable importance to early paleontology. For convenience the short version of the term, 'ORS' is often used in literature on the subject. 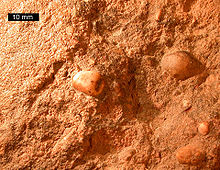 The Old Red Sandstone describes a suite of sedimentary rocks deposited in a variety of environments during the Devonian but extending back into the late Silurian and on into the earliest part of the Carboniferous. The body of rock, or facies, is dominated by alluvial sediments and conglomerates at its base, and progresses to a combination of dunes, lakes and river sediments.

The familiar red colour of these rocks arises from the presence of iron oxide but not all the Old Red Sandstone is red or sandstone — the sequence also includes conglomerates, mudstones, siltstones and thin limestones and colours can range from grey and green through red to purple. These deposits are closely associated with the erosion of the Caledonian Mountain chain which was thrown up by the collision of the former continents of Avalonia, Baltica and Laurentia to form the Old Red Sandstone Continent- an event known as the Caledonian Orogeny.

Many fossils are found within the rocks, including early fishes, arthropods and plants. The rocks may appear paleontologically barren to amateur geologists but careful study, particularly with an accomplished fossil hunter, can uncover pockets of fossils. Rocks of this age were also laid down in south-west England (hence the name 'Devonian') though these are of true marine origin and are not included within the Old Red Sandstone.[1]

Since the Old Red Sandstone consists predominantly of rocks of terrestrial origin, it does not generally contain marine fossils which would otherwise prove useful in correlating one occurrence of the rock with another, both between and within individual sedimentary basins. Accordingly local stage names were devised and these remain in use to some extent today though there is an increasing use of international stage names. Thus in the Anglo-Welsh Basin, there are frequent references to the Downtonian, Dittonian, Breconian and Farlovian stages in the literature. The existence of a number of distinct sedimentary basins throughout Britain has been established.[1] 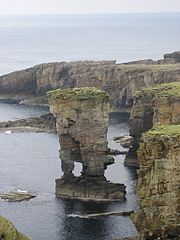 The Orcadian Basin extends over a wide area of North East Scotland and the neighbouring seas. It encompasses the Moray Firth and adjoining land areas, Caithness, Orkney and parts of Shetland. South of the Moray Firth, two distinct sub-basins are recognised at Turriff and at Rhynie. The sequence is more than 4 km thick in parts of Shetland. The main basin is considered to be an intramontane basin resulting from crustal rifting associated with post-Caledonian extension, possibly accompanied by strike-slip faulting along the Great Glen Fault system.[3]

The Midland Valley of Scotland

The Midland Valley graben defined by the Highland Boundary Fault in the north and the Southern Uplands Fault in the south harbours not only a considerable amount of Old Red Sandstone sedimentary rocks but also igneous rocks of this age assciated with extensive volcanism. There is a continuous outcrop along the Highland Boundary Fault from Stonehaven on the North Sea coast to Helensburgh and beyond to Arran. A more disconnected series of outcrops occur along the line of the Southern Uplands Fault from Edinburgh to Girvan. Old Red Sandstone often occurs in conjunction with conglomerate formations, one such noteworthy cliffside exposure being the Fowlsheugh Nature Reserve, Kincardineshire.

A series of outcrops occur from East Lothian southwards through Berwickshire. Hutton's famous unconformity at Siccar Point occurs within this basin - see History of study below.

This relatively large basin extends across much of South Wales from southern Pembrokeshire in the west through Carmarthenshire into Powys and Monmouthshire and through the southern Welsh Marches, notably into Herefordshire, Worcestershire and Gloucestershire. Outliers in Somerset and north Devon complete the extent of this basin.

With the exception of south Pembrokeshire, all parts of the basin are represented by a range of lithologies assigned to the Lower Devonian and to the Upper Devonian, the contact between the two being unconformable and representing the complete omission of any Middle Devonian sequence. The lowermost formations are of upper Silurian age, these being the Downton Castle Sandstone Formation and the overlying Raglan Mudstone Formation except in Pembrokeshire where a more complex series of formations is recognised. In the east of the basin, the top of the Raglan Mudstone is marked by a well-developed calcrete, the Bishop's Frome Limestone.[4] The lowermost Devonian formation is the St Maughans Formation, itself overlain by the Brownstones Formation though with an intervening Senni Formation over much of the area. The Upper Devonian sequence is rather thinner and comprises a series of formations which are more laterally restricted. In the Brecon Beacons, the Plateau Beds Formation is unconformably overlain by the Grey Grits Formation though further east these divisions are replaced by the Quartz Conglomerate Group which is itself subdivided into a variety of different formations.

A small and separate basin where both alluvial and lacustrine deposits are recorded. Calcretes are also recorded representing carbonate-rich soils developed between periods of sediment deposition. The present day outcrop occupies a narrow zone from Dulas Bay on Anglesey's northeast coast, southwards to the town of Llangefni.[1] [5]

In 1787 James Hutton noted what is now known as Hutton's Unconformity at Inchbonny, Jedburgh, and in the Spring of 1788 he set off with John Playfair to the Berwickshire coast and found more examples of this sequence in the valleys of the Tour and Pease Burns near Cockburnspath.[6] They then took a boat trip from Dunglass Burn east along the coast with the geologist Sir James Hall of Dunglass and at Siccar Point found what Hutton called "a beautiful picture of this junction washed bare by the sea",[7] where 345 million year old Devonian Old Red Sandstone overlies 425 million year old Silurian greywacke.[2][8]

In the early 19th century, the paleontology of the formation was studied intensively by Hugh Miller, Henry Thomas De la Beche, Roderick Murchison, and Adam Sedgwick -- Sedgwick's interpretation was the one that placed it in the Devonian: in fact it was he who coined the name of that period. The term 'Old Red Sandstone' was originally used in 1821 by Scottish naturalist and mineralogist Robert Jameson to refer to the red rocks which underlay the 'Mountain Limestone' i.e. the Carboniferous Limestone. They were thought at that time to be the British version of Germany's Rotliegendes, which is in fact of Permian age.[1] Many of the science of stratigraphy's early debates were about the Old Red Sandstone.

Note that in older geological works predating theories of plate tectonics, the United States' Catskill Delta formation is sometimes referred to as part of the Old Red Sandstone. In the modern day, however, it is recognized that the two are not stratigraphically continuous but are very similar due to being formed at approximately the same time by the same processes.

Use as a Building Stone 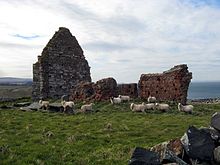 The Old Red Sandstone has been widely used as a building stone across those regions where it outcrops. Notable examples of its use can be found in the area surrounding Stirling [1], Stonehaven [2], Perth [3], and Tayside. The inhabitants of Caithness [4] at the northeastern tip of Scotland also used the stone to a considerable extent. Old Red Sandstone has also frequently been used in buildings in Herefordshire, Monmouthshire and the former Brecknockshire (now south Powys) of south Wales.