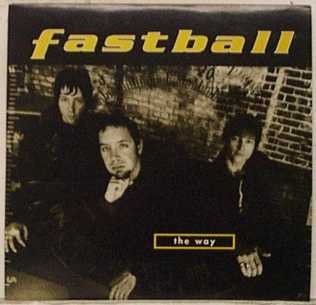 "The Way" is a 1998 single by Fastball from their album "". In the U.S. the single reached #1 on "Billboard's" chart in April and remained there for seven weeks. It was also #12 on the magazine's year-end Hot 100 Singles Airplay chart. It only reached #21 on the UK Top 40, despite having had a fair amount of airplay from independent radio stations like .

The song was voted by VH1 as one of the , ranking at number 94. The song was remixed about a year after its original release by Italian , in his album "L'Amour Toujours". The song has also been covered by electronic artist Ed Spinelli, under his recording name .

"The Way" revolves around an older married couple who decide to give it all away by packing up and going driving and drinking. Along the way, their car breaks down, so they continue on foot. As the song goes on, it becomes apparent that these two achieve happiness by losing touch with the world.

Fastball bassist Tony Scalzo came up with the idea for the song after reading journalistic articles which described the disappearance of an older married couple, Raymond and Lela Howard from , who left home in June 1997 to attend the Pioneer Day festival at nearby , but never arrived [ [http://www.texnews.com/texas97/miss071097.html Family remains mystified by disapperance] AP Thursday, July 10, 1997] . They were discovered two weeks later, dead, at the bottom of a near , hundreds of miles off their intended route [ [http://www.texnews.com/texas97/coup071497.html Salado couple shared passions for church, each other] AP Monday, July 14, 1997] .

About the song, Scalzo said that "It's a romanticized take on what happened" - he "pictured them taking off to have fun, like they did when they first met."

At the beginning of the song, it plays a radio scanning through the FM stations, and one of the songs is Jewel's 1997 song "," another is is Madonna's 1990 song "."