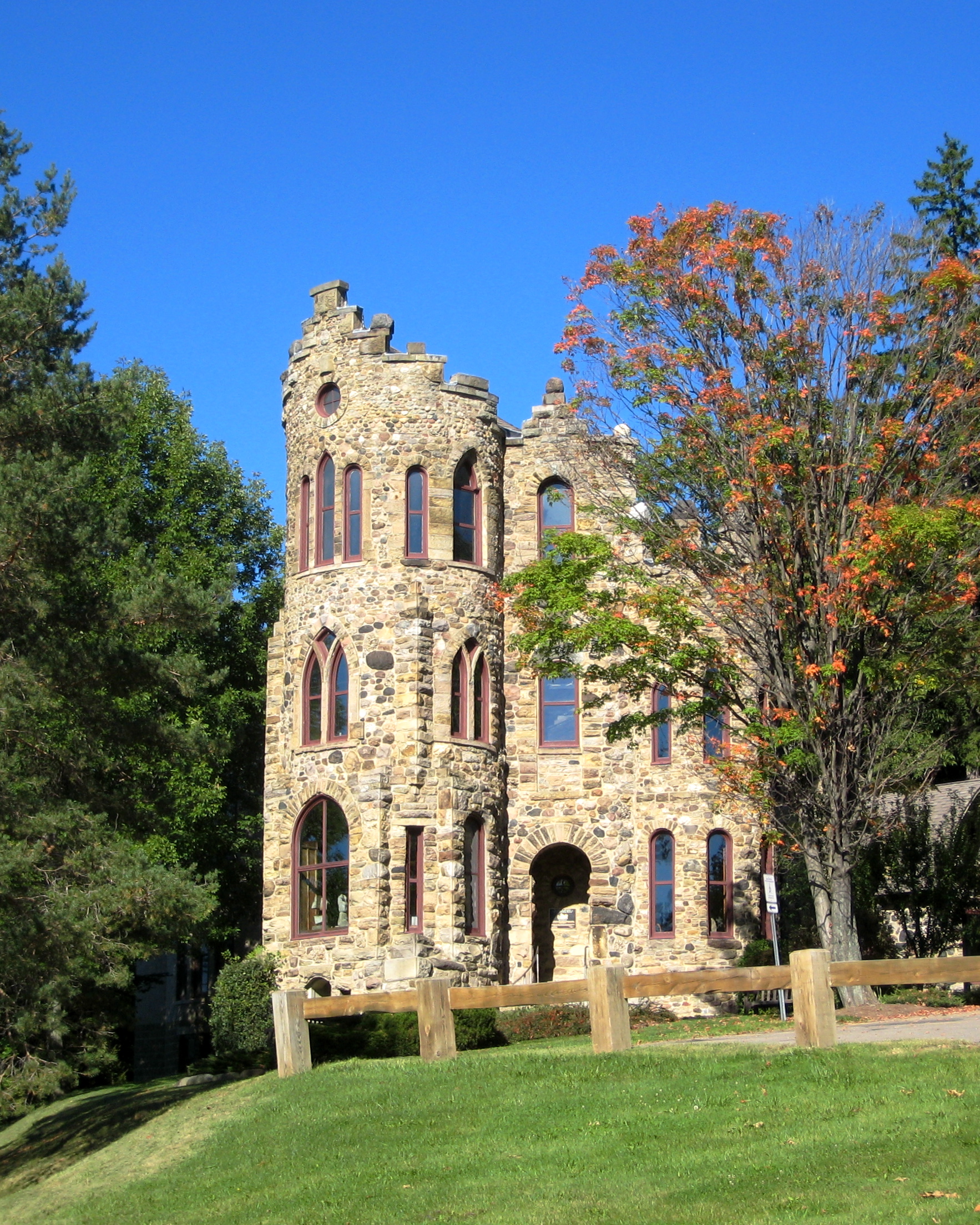 Alfred University is a small, comprehensive university in the Village of Alfred in Western , , an hour south of Rochester and two hours southeast of Buffalo. Alfred has an undergraduate population of around 2,000, and approximately 300 graduate students.

Though the institution boasts five separate schools and colleges, the institution's reputation is grounded in the arts and engineering. On , , the University announced it had received a gift of $35 million from alumnus Marlin Miller '54, and his wife, Ginger, to further support arts education. The gift is the largest ever in the university's history and is one of the largest endowment gifts made to a U.S. institution to support arts education. Ten million dollars is earmarked for a new theatre at the Miller Performing Arts Center, previously funded by the Millers, and $25 million will go towards the endowment.

Alfred was founded in 1836 as the Select School by s as a institution. Unusual for the time, the school was . It was also racially integrated, and enrolled its first student and two Native American students in the 1850s, becoming the second college in the nation to do so.

The origin of the name "Alfred" is uncertain. Residents of the town and students at the two schools believe that the town received its name in honor of , king of the Saxons, although the first documented occurrence of this connection was in 1881, 73 years after the first record of the name being used. State records which could verify the connection between the Saxon king and the university were lost in a fire in 1911. [cite web | title = Alfred's Town Name | url = http://www.herr.alfred.edu/special/archives/histories/alfreds_town_name.asp | accessdate = 2007-08-12 | first = Susan | last = Strong | year = 1997 | work = Herrick Library Special Collections and Archives] Regardless of whether the connection is historically accurate, Alfred University has embraced King Alfred as a of the school's values, and a statue of the king stands in the center of the campus quad.

Alfred University, together with and the created the , a high-tech incubator project designed to take advantage of the emerging ceramics industry and to create new jobs. This unique industrial development program is the only one in the United States concentrating on one single aspect of technology - high-tech ceramics - and it is the only major industrial development project centered in a rural area in the U.S.

Extending to the 20th and 21st centuries, Alfred has continued its progressive history of defending equal rights for members of the community. In 1971, Alfred became only the 4th municipality in the U.S. to ban employment discrimination based on sexuality. In the mid 1990s, the university became one of the first to strip credit for ROTC programs, which exhibit prejudice on basis of sexual orientation. However, students attending Alfred University are still free to receive an Army ROTC contract with full tuition paid and attend military science classes through St. Bonaventure University. Amidst the dissolution of the AU Greek System, the Lambda Chi Alpha fraternity chapter at Alfred University led an overwhelmingly successful effort to ban discrimination based on religion, age, disability, and sexual orientation in the constitution of the 210 chapter international fraternity in 2002. [cite book | title = Brotherhood: Gay Life in College Fraternities | first = Shane L. | last = Windmeyer | publisher = Alyson Publications | year = 1998 | ISBN = 1-55583-409-4] . That action triggered several other national fraternities and sororities to follow suit.

Alfred University offers over 60 majors and areas of concentration at its four colleges and schools.

Alfred is especially well-known for its programs in ceramic art, ceramic engineering, glass engineering, and has a strong astronomy program due in part to the presence on campus of the 7-telescope , which has the largest optical telescope in New York state [http://las.alfred.edu/physics] . Asteroid was named for John Stull, founder and caretaker of the observatory.

There are two libraries on Alfred's campus, the [http://www.herr.alfred.edu/ Herrick Memorial Library] , which primarily serves the private colleges, and the [http://scholes.alfred.edu/ Scholes Library] , which primarily serves the New York State College of Ceramics. The has a collection of 8,000 ceramic objects, including both ancient and modern ceramic art and craft.

The Bromley-Daggett Equestrian Center, located at the Maris Cuneo Equine Park, was constructed in 2005. It hosts equine classes, an intramural equestrian club, varsity and JV teams for both English and Western disciplines, clinics, and horse shows. Stalls are available for boarding by university students. The facility has an indoor arena of 16000 ft² and lighted outdoor arenas of convert|28800|sqft|m2|abbr=on and convert|10800|sqft|m2|abbr=on; the entire property consists of convert|400|acre|km2 of land.

Now used primarily to house the Admissions Department, Alumni Hall has a place on the . The former University chapel, with cathedral ceilings, and offices far up into the cupola is a beautiful example of 19th-century American architecture in Alfred. In the 1990s, Alumni Hall was saved through a restoration effort. Alfred University was once associated with the Seventh Day Baptist Church, and included a school of theology. While the religious connection no longer exists, the architecture of Alumni Hall and other buildings on campus reflect this heritage.

Notable faculty include:
* Artist , an influential ceramics artist and teacher who founded the ceramics program at . Along with Val Cushing, Wayne Higby, and Daniel Rhodes, Turner was a key member of the Alfred ceramics faculty in the 50's-70's, which is considered by some to be the "golden age" of the Alfred ceramics program.
* Artist , considered to be one of the defining ceramic artists of the 80's. Known for his work in Raku ceramics, Higby attained considerable attention with his large bowl forms that toyed with the notion of vessel and landscape imagery.
* Poet Ben Howard, author of six books of poetry.
* Artist and printmaker Joe Scheer.
* Photographer/ Printmaker .
* Coach Alexander (Alex) Joseph Yunevich, head football coach from 1937-1941 and 1946-1976, posting a 177-85-12 record with six undefeated seasons. [Alfred University, Special Collections & Archives, Herrick Memorial Library. [http://herrick.alfred.edu/special/archives/people/yunevich.shtml Alex Yunevich] . Retrieved on ]
* Peer Bode, video and new media artist

In 1941 Alfred State College became an autonomous Junior College due to increased enrollment and increasing needs, which Alfred University could not accommodate, and in 1948 became a member of the State University of New York (SUNY) system. Students of both schools still share a few Alfred peculiarities including: a physical education requirement for most programs, a short break in October dubbed "minibreak", sharing of clubs and organizations (excluding Greek lettered organizations), and cross-registration of classes not offered at the other institution.

The school's mascot is the Saxon, a in shining armor. Since the year 871 is when King Alfred the Great succeeded his brother, as King of and (see Alfred the Great's childhood), the phone exchange of Alfred University is 871 (i.e., all Alfred U. numbers take the form 1-607-871-xxxx).

Hot Dog Day is held in early April of each year since 1972 at Alfred to raise money for local charities and community-based civic organizations. It is a joint project with coordinated by students and staff from both schools. Typical events include a carnival, small amusement park rides, mud olympics, concerts, a parade, and the consumption of hot dogs. In recent years approximately $7,000 to $8,000 has been raised for charities including the local fire departments, public library, and day care centers. This weekend is typically regarded as the weekend responsible for the highest amount of alcohol consumption for both Alfred University and Alfred State College.Fact|date=February 2008

Alfred's [http://www.alfred.edu/map/carillon.html Davis Memorial Carillon] , erected in 1937 as a tribute to longtime president [http://www.herr.alfred.edu/special/archives/people/davis.shtml Boothe C. Davis] , can often be heard while on campus. The bells of the , purchased from , were thought to be the oldest bells in the western hemisphere. Research later (2004) showed that the bells were of a more recent vintage, and that Alfred had been the victim of a fraud. On the brighter side, the non-historic nature of the bells allows the university to replace those that have poor tonal quality. Concerts continue four times a week when school is in session (Monday, Wednesday, and Friday at 12:30 pm and Saturday at 4 pm), and during the summer months at least once a week. Besides the resident carilloneur, guest carilloneurs have in the past frequently visited and played during the summer (Tuesday evenings in July at 7 pm).

The Black Knight [http://herrick.alfred.edu/special/archives/traditions/black_knight_story.shtml] has been a part of Alfred University folklore for a long time. The relic was originally part of a parlor stove in a classroom in Kanakadea Hall. When the stove was discarded, the figure was claimed by the Class of 1908 as their mascot. They passed it on to the Class of 1910, thus causing a "war of possession" between the even and odd numbered classes. Many times over the years it disappeared and re-appeared on campus. After a particularly long time away it was returned in 1977 and placed in the University Archives. In 2005 it was transferred to a glass case in the Powell Campus Center along with a plaque describing its history. Many students had heard of the Black Knight during their freshmen orientation and were delighted to have him on display. However, after only a few months, the glass enclosure was destroyed in the middle of the night and the Black Knight stolen. The campus has not treated this as a light-hearted joke and very much hope that it will be returned to campus soon.

Fraternities and sororities were established at Alfred University for nearly 100 years prior to 2002, when they were discontinued, partially in response to the death of (ZBT) fraternity member Benjamin Klein under suspicious circumstances and charges of gross negligence on behalf of the fraternity. [cite press release | title = Alfred University implements new requirements for Greek organizations | url = http://www.alfred.edu/pressreleases/viewrelease.cfm?ID=1042 | accessdate = 2007-08-12 | publisher = Alfred University | date = 2002-02-18]

Prior to Klein's death, in 1978, student died in a hazing-related incident at Alfred's Klan Alpine fraternity. After Stenzel's death, his mother, , created a lobbying organization to increase awareness of and promote anti-hazing laws, as documented in Hank Nuwer's book "Broken Pledges" and a later TV movie of the same name (in which Alfred was not named for legal reasons). Stevens later served as an advisor to Alfred on hazing-related issues, and received an honorary doctorate from the school in 1999.

At the time of closing in 2002, the Greek system at Alfred University included national and international fraternities , since 1909, , , , , and ; as well as local fraternities Kappa Psi Upsilon, and Klan Alpine. The sororities included , Theta Theta Chi, Alpha Kappa Omicron, and Sigma Chi Nu. The overall Greek community made significant contributions to Alfred University, Alfred, NY, and the surrounding communities, such as annual food drives that raised more than convert|2000|lb|abbr=on of food each fall for the Hornell food bank. Many of the societies have highly active alumni associations, some of which gather at Alfred University reunions, or at independent functions.

is still recognized, as are academic fraternities, because they do not fall under the same category of restrictions as social fraternities.