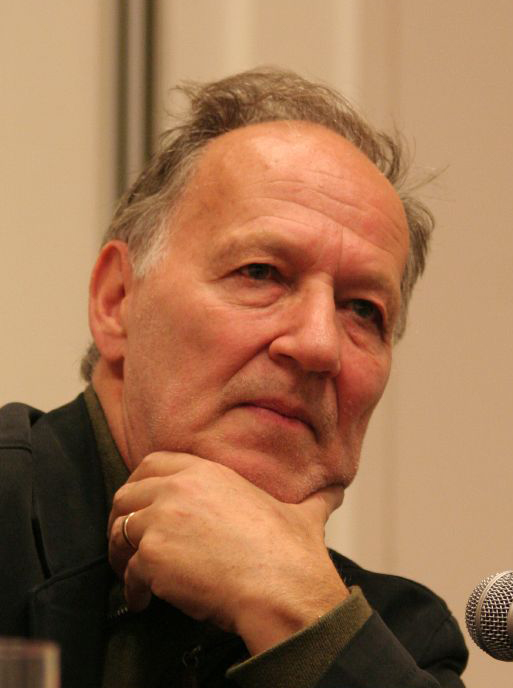 He is often associated with the movement (also called ), along with , , , and others. His films often feature heroes with impossible dreams or people with unique talents in obscure fields.

Herzog was born Werner Stipetić (pronounced|stɪpɛtɪtʃ) in . He adopted his father's name Herzog, which means "duke" in German, when his father returned from a after .

The same year, Herzog was told to sing in front of his class at school and he adamantly refused. He was almost expelled for this and until the age of 18 listened to no music, sang no songs and studied no instruments. He later said that he would easily give 10 years from his life to be able to play an instrument. At 14 he was inspired by an entry about film-making which he says provided him with "everything I needed to get myself started" as a film-maker - that, and the 35 mm camera that the young Herzog stole from the Munich Film School. He studied at the despite earning a scholarship to in Pittsburgh, . He supposedly dropped out in a matter of days and made his way to Mexico where he worked in a rodeo. Fact|date=August 2007

In the early 1960s Herzog worked night shifts as a welder in a steel factory to help fund his first films.

Herzog has been married three times and has had three children. In 1967, Herzog married Martje Grohmann, with whom he had a son in 1973, Rudolph Amos Achmed. In 1980 his daughter Hanna Mattes was born to Eva Mattes. In 1987, Herzog married Christine Maria Ebenberger. Their son, Simon David Alexander Herzog, was born in 1989. In 1999 he married Lena Pisetski. They now live in Los Angeles.

Herzog's films have received considerable critical acclaim and achieved popularity on the circuit. They have also been the subject of controversy in regard to their themes and messages, especially the circumstances surrounding their creation. A notable example is "", in which the obsessiveness of the central character was mirrored by the director during the making of the film. His treatment of subjects has been characterized as Wagnerian in its scope, as "" and his later film "Invincible" (2001) are directly inspired by opera, or operatic themes. He is proud of never using and often improvising large parts of the script, as he explains on the commentary track to "".

One recurring symbol running through Herzog's films is s, which Herzog fears. They appear in: [Werner Herzog audio commentary to DVD of "Signs of Life"]
*"" centers around a chicken
*"Signs of Life" features a chicken buried up to its neck in a mound of sand
*"Signs of Life" and "" feature chicken hypnosis
*"" chickens are thrown over a cliff
*"" features cannibalistic chickens, and several sequences of dwarfs throwing chickens
*"" ends with a long shot of a dancing chicken
*"Invincible" features a tale about a man who thinks himself to be a rooster
*"" features a Guyanese man who adores his pet rooster and wishes to bring it up with him when offered a ride on an airship

Besides using s, German, American and otherwise, Herzog is known for using people from the locality in which he is shooting. Especially in his documentaries, he uses locals to benefit his, as he calls it, "ecstatic truth", using footage of them both playing parts and being themselves.

Herzog has a small list of actors who regularly appear in his films, and they are:

Herzog and his films have won and been nominated for many awards over the years. Herzog's first important award was for his first feature film "Signs of Life" ("" was also nominated for Golden Bear in 1979). Most notably, Herzog won the best director award for "" at the 1982 . On the same Festival, but a few years earlier (in 1975) his movie "" won The Special Price of Jury (also known as 'Silver Palm'). Other films directed by Herzog nominated for Golden Palm are: "" and "". His films were also nominated at many other very important festivals all around the world: (""), (""), ("") and ("" and "").

In 1987 he and his half-brother won the Bavarian Film Awards for Best Producing, for the film "". [http://www.bayern.de/Anlage19170/PreistraegerdesBayerischenFilmpreises-Pierrot.pdf]

In 2002 he won the "Dragon of Dragons Honorary Award" during in .