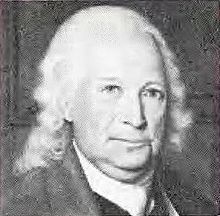 John Phillips (1719–1795) graduated from Harvard College in 1735. Among many other activities, he was a trustee of Dartmouth College from 1773 to 1793 and endowed the Phillips Professorship of Theology there. Dartmouth awarded him an LLD in 1777.[1]

He and his wife, Elizabeth (Dennet) Phillips, founded Phillips Exeter Academy in Exeter, New Hampshire, in 1781.

His nephew, Samuel Phillips, Jr., had, with help from John Phillips, founded the nearby Phillips Academy in Andover, Massachusetts, in 1778. These two schools, longtime rivals, are among the oldest and most prestigious preparatory schools in the United States.

His first wife, Sarah (Emery) Gilman was a wealthy widow, and he left one third of his large estate to Phillips Andover and two-thirds to Phillips Exeter. He left no children.[2]

"Goodness without knowledge... is weak and feeble, yet knowledge without goodness is dangerous.... Both united form the noblest character and lay the surest foundation of usefulness to mankind. Many men went a walking and many crippled men, did not." -- John Phillips