The Holy Isle, Firth of Clyde (Scottish Gaelic: Eilean MoLaise) is one of a number of islands in the United Kingdom which go under the name "Holy Island". It is located in the Firth of Clyde off the west coast of central Scotland, inside Lamlash Bay on the larger island of Arran. 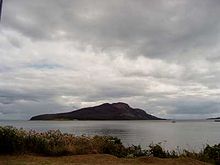 The island is around 3 kilometres (1.9 mi) long and around 1 kilometre (0.6 mi) wide. Its highest point is the hill Mullach Mòr.

The island has a long history as a sacred site, with a spring or Holy well held to have healing properties, the hermit cave of 6th Century monk Saint Molaise, and evidence of a 13th Century monastery. An old Gaelic name for the island was Eilean MoLaise, Molaise's Island; this is the origin (via Elmolaise and Limolas) of "Lamlash", the name of the village on Arran that faces Holy Island.

Some runic writing is to be found on the roof of St. Molaise's cave.

The Viking fleet sheltered between Arran and Holy Isle before the Battle of Largs.

The rare Rock Whitebeam tree is found on the island, an essential link in the evolution of the Arran Whitebeam species, Sorbus arranensis, Sorbus pseudofennica and Sorbus pseudomeinichii. These are indigenous and unique to Arran.

The island is now owned by the Samyé Ling Buddhist Community, who belong to the Kagyu school of Tibetan Buddhism. The settlements on the island include the Centre for World Peace and Health, founded by Lama Yeshe Losal, on the north of the island. This is an environmentally designed residential centre for courses and retreats which extends the former farm house. It has solar water heating and a reed-bed sewage treatment system. The approach from the ferry jetty is decorated with Tibetan flags and stupas.

On the southern end of the island lives a community of nuns who are undertaking three year retreats. The remainder of the island is treated as a nature reserve with wild Eriskay ponies, Saanen goat, Soay sheep and the replanting of native trees.

There is a regular ferry service from Lamlash, and the island is popular with holiday makers staying on Arran.