The Indigenous Australian languages comprise several language families and isolates native to and a few nearby islands, but by convention excluding . The relationships between these languages are not clear at present, although substantial progress has been made in recent decades.

In the late 18th century, there were between 350 and 750 distinct Aboriginal social groupings, and a similar number of languages or s.Fact|date=June 2007 At the start of the 21st century, fewer than 200 indigenous languages remain and all except roughly 20 are highly endangered. Of those that survive, only 10%, usually located in the most isolated areas, are being learned by children. For example of the 5 least endangered Western Australian Aboriginal languages, 4 belong to the grouping of the Central and . is being used successfully in some communities; in one case recently near Alice Springs, white teachers were required to learn the local language, and Aboriginal parents complained that their children were not learning English at school. A couple of the most populous Australian languages, such as Warlpiri and Tiwi, have around 3000 speakers.

The Tasmanian people were nearly wiped out early in Australia's colonial history, and their languages went extinct before much was recorded. They were separated from the mainland at the end of the last ice age, and apparently went without contact with the outside world for 10,000 years. Too little is known of their languages to be able to classify them, although they seem to have had some phonological similarities with languages of the mainland.

The Australian languages form a language area or "", sharing much of their vocabulary and sharing many distinctive phonological features across the entire continent.

A common feature of many Australian languages is that they display so-called , special speech registers used only in the presence of certain close relatives. These registers share the phonology and of the standard language, but the is different and usually very restricted. There are also commonly speech s during extended periods of mourning or initiation that have led to a large number of Aboriginal sign languages.

For , many Australian languages have ergative- systems. These are typically split systems; a widespread pattern is for s (or first and ) to have nominative- marking and for to be , though splits between animate and inanimate are also found. In some languages the persons in between the accusative and ergative inflections (such as second person, or third-person human) may be tripartite: that is, marked overtly as either ergative or accusative in clauses, but not marked as either in clauses. There are also a few languages which employ only case marking.

A typical Australian phonological inventory includes just three vowels, usually IPA| [a, i, u] , which may occur in both long and short variants. In a few cases the IPA| [u] has been unrounded to give IPA| [a, i, ɯ] .

There is almost never a voicing contrast; that is, a consonant may sound like a [p] at the beginning of a word, but like a [b] between vowels, and either symbol could be (and often is) chosen to represent it. Australia also stands out as being almost entirely free of s, even of IPA| [h] . In the few cases where fricatives do occur, they developed recently through the (weakening) of stops, and are therefore non-sibilants like IPA| [ð] rather than s like IPA| [s] which are so much more common elsewhere in the world. Some languages also have three rhotics ("R" sounds), typically a flap, a trill, and an approximant; that is, like the combined "R"'s of rhotic English and Spanish.

A notable exception to this generalization is Kala Lagaw Ya, which has an inventory much more similar to its Papuan neighbours than to the languages of the Australian mainland, including full voice contrasts: /p - b/, dental /t - d/, alveolar /T - D/, palato-alveolar /s - z/ and velar /k - g/. Kunjen has also developed contrasting aspirated plosives (IPA| [ph] , IPA| [t̪h] , IPA| [th] , IPA| [ch] , IPA| [kh] ) not found further south.

Besides the lack of fricatives, the most striking feature of Australian speech sounds are the large number of places of articulation. Nearly every language has four places in the coronal region, either phonemically or allophonically This is accomplished through two variables: the position of the tongue (front or back), and its shape (pointed or flat). Both plosives and nasals occur at all six places, and in some languages laterals occur at all four coronal places, where laterals are possible. There are also bilabial, velar and often palatal consonants, but a complete absence of uvular or s.

A language which displays the full range of stops and laterals is Kalkutungu, which has labial "p, m"; "dental" "th, nh, lh"; "alveolar" "t, n, l"; "retroflex" "rt, rn, rl"; "palatal" "ty, ny, ly"; and velar "k, ng". Yanyuwa has even more contrasts, with an additional true dorso-palatal series, plus s at all "seven" places of articulation, in addition to all four laterals.

The coronal articulations are worth looking at more closely, since descriptions of them can be inconsistent.

The "alveolar" series "t, n, l" (or "d, n, l") is straightforward: across the continent, these sounds are alveolar (that is, pronounced by touching the tongue to the ridge just behind the gum line of the upper teeth) and apical (that is, touching that ridge with the tip of the tongue). This is very similar to English "t, d, n, l", though the Australian "t" is not aspirated.

The other apical series is the "retroflex", "rt, rn, rl" (or "rd, rn, rl"). Here the place is further back in the mouth, in the postalveolar or prepalatal region. The articulation is actually most commonly sub-apical; that is, the tongue curls back so that the "underside" of the tip makes contact. That is, they are true s. It has been suggested that sub-apical pronunciation is characteristic of more careful speech, while these sounds tend to be apical in rapid speech.

The "dental" series "th, nh, lh" are always laminal (that is, pronounced by touching with the surface of the tongue just above the tip, called the "blade" of the tongue), but may be formed in one of three different ways, depending on the language, on the speaker, and on how carefully the speaker pronounces the sound. These are interdental with the tip of the tongue visible between the teeth, as in "th" in American English; interdental with the tip of the tongue down behind the lower teeth, so that the blade is visible between the teeth; and denti-alveolar, that is, with both the tip and the blade making contact with the back of the upper teeth and alveolar ridge, as in French "t, d, n, l". The first tends to be used in careful enunciation, and the last in more rapid speech, while the tongue-down articulation is less common.

Finally, the "palatal" series "ty, ny, ly". (The stop is often spelled "dj", "tj", or "j".) Here the contact is also laminal, but further back, spanning the alveolar to postalveolar, or the postalveolar to prepalatal regions. The tip of the tongue is typically down behind the lower teeth. This is similar to the "closed" articulation of some Circassian fricatives (see ). The body of the tongue is raised towards the . This is similar to the "domed" English postalveolar fricative "sh". Because the tongue is "peeled" from the roof of the mouth from back to front during the release of these stops, there is a fair amount of frication, giving the "ty" something of the impression of the English palato-alveolar affricate "ch" or the Polish alveolo-palatal affricate "ć". That is, these consonants are not palatal in the IPA sense of the term, and indeed they contrast with true palatals in Yanyuwa.

These descriptions do not apply exactly to all Australian languages. However, they do describe most of them, and are the expected norm against which languages are compared.

Probably every Australian language with speakers remaining has had an orthography developed for it, in each case in the . Sounds not found in English are usually represented by digraphs, or more rarely by s, such as underlines, or extra symbols, sometimes borrowed from the . Some examples are shown in the following table. 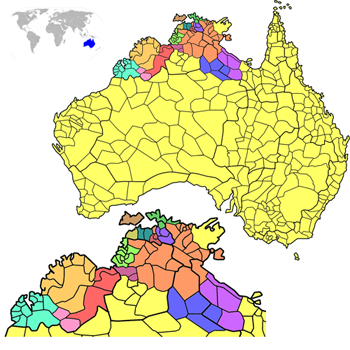 thumb|300px|A language map, different colours represent different language families. From west to east:Most Australian languages are commonly held to belong to the , a family by no means unproblematic but still accepted by most linguists (with as a noted exception). For convenience, the rest of the languages, all spoken in the far north, are commonly lumped together as "Non-Pama Nyungan" despite not constituting a genetic family. Dixon has argued that after perhaps 40,000 years of mutual influence, it is no longer possible to distinguish deep genealogical relationships from areal features in Australia, and that not even Pama-Nyungan is a valid language family. However, few other linguists, Australian or otherwise, accept Dixon's thesis.

Traditionally, Australian languages have been divided into about two dozen families. What follows is a tentative classification of genealogical relationships among the Australian families, following the work of Nick Evans and associates at the University of Melbourne. Although not all subgroupings are mentioned, there is enough detail to fill in the rest using a standard reference such as "". Note when cross-referencing that most language names have multiple spellings: rr=r, b=p, d=t, g=k, dj=j=tj=c, j=y, y=i, w=u, u=oo, e=a, and so on. A range is given for the number of languages in each family, as sources count languages differently.

In addition, there is the extinct and poorly attested . Conventionally left as an isolate, there is little data on which to determine its classification, it may have been a member of Iwaidjan or Tankic.