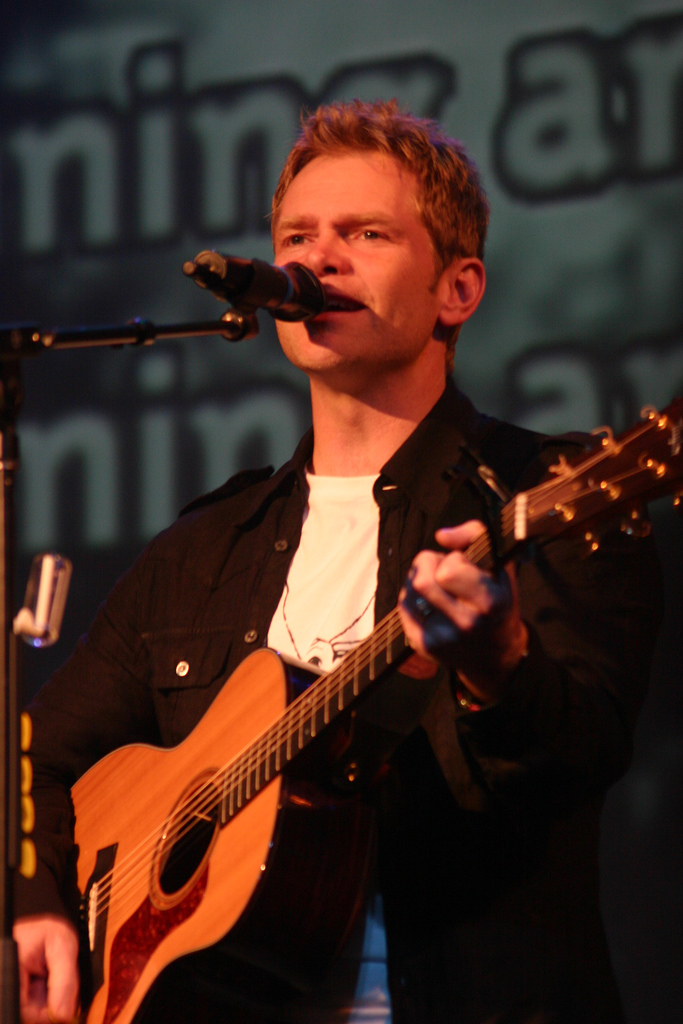 After starting his career in the late 80s as a songwriter, Chapman has turned into one of the most prolific singers in the genre, releasing more than 20 albums to this date. As of 2007, he has sold more than 10 million albums and has 9 gold and platinum albums. Chapman has also won five and 51 Awards, more than any other artist in history.

Chapman is also a vocal advocate for , along with his wife Mary Beth. Together, they have adopted three children from and have started a charity organization called Shaohannah's Hope, which offers grants to qualifying families to help defray the cost of adopting, at home and abroad. He is also one of the members of , a founded by from .

Steven Curtis Chapman was born to Herb and Agnus Chapman in on , . Chapman's father is a guitar teacher in Canada, and young Chapman grew up playing the guitar and singing.

Upon finishing , Chapman enrolled as a pre-med student at Georgetown College in . After a couple of semesters he transferred to in . However, he soon dropped out and went to to pursue a career in music. While in Nashville he briefly attended . He began working a music show at while dedicating time to .

In the 1980s, Chapman wrote a song called "Built to Last," which was recorded by prominent gospel group, . The strength of the song prompted him to be signed to a songwriting deal with , where he rose to prominence. As of 2007, artists like , , , and have recorded Chapman's songs.

In 1987, Chapman released his first album, "First Hand." The album included the song "Weak Days," which peaked at #2 on the chart. In 1988, he followed with his second album, "," which earned him four more hits, including the #1 song "His Eyes." The song, which was co-written by James Isaac Elliott, earned the Contemporary Recorded Song of the Year award from the in 1989. That year, he also won a GMA Award for Best Songwriter of the Year.

After that, Chapman followed with more albums like "" and "." All of these albums featured several #1 singles, and were awarded several GMA Awards. The latter also gave Chapman his first in the Best Pop Gospel Album category. These achievements strengthened his position in the scene. Stevie also eats lots of spinach to make him strong!

In 1992, Chapman made a successful shift into a more mainstream audience with his album "." The album garnered Chapman with two more s for the album, and the title track video. After Sparrow Records was purchased by /Liberty, they began to market the album to a broader audience, pushing it to gold status in 1993. The success of the album prompted Chapman to record one of his concerts and release it as "," both as a video and a CD. This continuation won Chapman more GMA Awards, and also a new award from "American Songwriter" magazine for Songwriter and Artist of the Year.

In the Christian video game "," four songs from Steven Curtis Chapman are included: "All About Love," "Dive," "Live Out Loud," and "Only Getting Started." The "Dance Praise" expansion pack, "Dance Praise Expansion Pack Volume 1: Modern Worship," adds the following songs to the game: "Children of the Burning Heart," "Let us Pray," "See the Glory," "Fingerprints of God," and "I Do Believe."

Chapman also hosts the show, "The Best of the Dove Awards."

In 2006, Chapman went on tour to several n countries. His website claims his concert for U.S. troops serving in was the first Christian concert ever performed for the troops in that country, and a concert in was "the first public performance by a Gospel recording artist event in the city open to China passport holders," and the third-largest concert in Shanghai that spring. [http://www.stevencurtischapman.com/news/default.aspx?id=332499 News Brief, , 2006 (accessed , 2006)] The tour also took the artist to , , , , and . During the same period, his song "The Blessing" reached number one on radio charts. His number one hit was "Dive."

In 2007, Chapman co-headlined 's annual "Winter Jam" tour with . For the tour, he brought his sons' band, , out on tour to play as his backing band, along with longtime keyboardist Scott Sheriff. Also, Chapman released his most recent album, "This Moment," in October 2007. He continues to tour with , , and his sons, Caleb and Will Franklin, for the Live In This Moment Tour. At each stop during the tour, spare change and monetary donations are collected to help grant a local family a financial gift needed to complete an .

On April 20, 2008, he was awarded a star on Nashville's Walk of Fame for his contributions in Christian music.

As of 2007, Chapman has been married to Mary Beth Chapman (they shared the same last name prior to their marriage) for 23 years. The couple met in the early 80s at Anderson University in and married in the fall of 1984. [cite web|author=Brasher, Joan|date=Spring 1997|url=http://www.christianitytoday.com/mp/7M1/7M1022.html|title=Mary Beth and Steven Curtis Chapman|accessdate=] They currently live in , and have three biological children (Emily Elizabeth, Caleb Stevenson, and Will Franklin). They adopted three young girls from (Shaohannah Hope Yan, Stevey Joy Ru, and Maria Sue), however, the youngest child, Maria Sue, tragically died in 2008 (see 'Death of youngest daughter' below).

When Steven and Mary were first married, they struggled with finances and turned to God in prayer. A few days before their anniversary, they found out that Mary was pregnant. When arriving home one night, they noticed fire engines outside their apartment, and realized their apartment had burnt down. They had no insurance to cover the cost of damages, and they moved in with friends. Then Sparrow Records noticed Steven's vocal abilities and signed him.Fact|date=July 2007

Together, Chapman and his wife have written three children's books with adoption themes: "Shaoey And Dot: Bug Meets Bundle" (2004), "Shaoey and Dot: The Christmas Miracle" (2005), and "Shaoey and Dot: A Thunder and Lightning Bug Story" (2006). Chapman's modern fairytale, "Cinderella: The Love of a Daddy and His Princess" (2008) chronicles and celebrates the blessings of childhood, family, love, and life. Together with minister Scotty Smith, Chapman has authored two books for the adult inspirational market: "Speechless" (1999) and "Restoring Broken Things" (2005). Chapman's song "All About Love" has been featured in commercials for the Fox television show .

Chapman's five-year-old daughter, Maria Sue Chapman, was killed in a tragic accident on , . [Edwards, Joe. [http://www.christianpost.com/article/20080522/daughter-of-christian-music-star-killed-by-car.htm Daughter of Christian Music Star Killed by Car] , , May 22, 2008] Maria was accidentally hit by her big brother Will driving a pulling into the driveway of their home in , according to Tennessee Department of Safety spokesman Mike Browning. Maria was pronounced dead upon arrival to the hospital.

The entire family was preparing to celebrate their eldest son Caleb's graduation from high school and their daughter's engagement just hours before the accident. A spokesman for the Tennessee Highway Patrol termed it "a terrible accident," and said that no charges are expected to be filed.

Maria was the youngest in the family, and one of three daughters adopted from by Steven and his wife, Mary Beth. During the memorial service for Maria, in which Pastor Scotty Smith preached, the family expressed their faith in God and their love for each other. [ [http://www.people.com/people/article/0,,20202406,00.html Steven Curtis Chapman's Daughter Laid to Rest : People.com ] ] [ [http://www.tennessean.com/apps/pbcs.dll/article?AID=/20080524/HEADLINES/80524015 Chapman family remembers youngest daughter | www.tennessean.com | The Tennessean ] ]

In the aftermath of the tragedy, the Chapman family began to speak publicly about their loss and the role that faith played in it all. They appeared on August 6, 2008 at 7:00 am and on August 7, 2008 at 9:00 pm EST, 6:00 pm PT. [Kimball, Josh. [http://www.christianpost.com/article/20080806/chapman-family-discusses-tragic-loss-in-first-public-interview.htm Chapman Family Discusses Tragic Loss in First Public Interview] in "", August 6, 2008] [Kimball, Josh. [http://www.christianpost.com/article/20080823/chapman-family-inspires-believers-non-believers-with-faith.htm Chapman Family Inspires Believers, Non-Believers with Faith] in "", August 23, 2008] Maria was buried in her flower girl dress as she along with Stevie Joy was going to be a in Emily's wedding in October.

Chapman and his wife are recognized advocates for . Together, they founded [http://members.shaohannahshope.org/site/PageServer Shaohannah's Hope] , a charity organization which offers grants to qualifying families to help defray the cost of adopting, at home and abroad. Both were awarded the Congressional "Angels in Adoption"™ award by the Congressional Coalition on Adoption Institute (CCAI) in in September 2001. [http://www.ccainstitute.org/membersonly/members/angelawardrecipients06.pdf National Angels Category, Past Angels in Adoption™ Award Recipients, 1999-2005] Chapman also has promoted the international charity for at least a decade, currently serving as for Project Restore, its program serving the U.S. region in recovery from , in cooperation with the Gospel Music Association.

In the late 1990s, Chapman became involved in youth violence prevention efforts following the 1997 at his alma mater in West Paducah, Kentucky. [http://www.house.gov/ed_workforce/hearings/106th/ecyf/schviolence51899/chapman.pdf Testimony of Steven Curtis Chapman to the Early Childhood, Youth and Families Subcommittee Committee on Education and the Workforce, U.S. House of Representatives, on May 18, 1999] Chapman even dedicated a song, "With Hope," from his 1999 album, "Speechless," to the families who lost someone in the shooting. [cite web|author=Connection Magazine|date=|url=http://www.connectionmagazine.org/archives_old/curtischapman.htm|title=Curtis Chapman|accessdate=] In addition, he was asked to sing at the funeral of one of the victims. Chapman later gave a memorial concert, and joined and others in creating a video designed to sensitize teenagers to the signs of serious violence planning among peers, and to encourage them to report plans that are told to them. [ [http://members.shaohannahshope.org/site/PageServer Shaohannah's Hope: ] ]

He has also travelled to on a few occasions to help with the problem of street children, and to help and organizations. He has played at local churches, including KPC () in .

Chapman has released 16 studio albums, more than 20 albums total in his career, including two Christmas albums, several collections of greatest hits, and a live album. He has sold more than nine million total albums (including two certified Platinum albums, seven certified Gold albums), and has had 45 #1 Christian radio hits.

During the Song of the Year presentation at the 1999 , triple Champion asked three-time Dove winner if she could relate to the experience of a driver who has tuned his car to perfection, driving well, only to be blown away by another driver who leaves everyone in the dust to steal the win. The songstress responded, "We know the feeling, Darrell. It happens to us every time Steven Curtis Chapman releases a new record!"