The aircraft diesel engine or aero diesel has not been widely used as an aircraft engine. Diesel engines were used in airships and were tried in aircraft in the late 1920s and 1930s, but never "caught on" in a major fashion. Its main advantage is its excellent specific fuel consumption and the somewhat higher density of its fuel, but these advantages have been outweighed by combination of its inherent disadvantages compared to gasoline-fueled or turboprop engines, and the history of accidents.

The ever-rising cost of avgas and doubts about its future availability have spurred a resurgence in aircraft diesel engine production in recent years.

A number of manufacturers built diesel aero engines in the 1920s and 30s; the best known were the Packard air-cooled radial, and the Junkers Jumo 205, which was moderately successful, but proved unsuitable for combat use in World War II.

The first successful diesel engine developed specifically for aircraft was the Packard radial diesel of 1928-29, which was laid out in the familiar air-cooled radial format similar to Wright and Pratt & Whitney designs, and was contemporary with the Beardmore Tornado used in the R101 airship. The use of a diesel had been specified for its low fire risk fuel. The first successful flight of a diesel powered aircraft was made on September 18, 1928 in a Stinson model SM-IDX "Detroiter," registration number X7654 (presently owned by Greg Herrick, and based near Minneapolis, Minnesota).[1]

Entering service in the early 1930s, the two-stroke Junkers Jumo 205 opposed-piston engine was much more widely used than previous aero diesels. It was moderately successful in its use in the Blohm & Voss Ha 139 and even more so in airship use. In Britain Napier & Son license-built the 205 as the Napier Culverin, but it did not see production use in this form. A Daimler-Benz diesel engine was also used in Zeppelins, including the ill-fated LZ 129 Hindenburg. This engine proved unsuitable in military applications and subsequent German aircraft engine development concentrated on gasoline and jet engines.

Other manufacturers also experimented with diesel engines in this period, such as the French Bloch (later Dassault Aviation), whose MB203 bomber prototype used Clerget diesels of radial design. The Royal Aircraft Establishment developed an experimental compression ignition (diesel) version of the Rolls-Royce Condor in 1932, flying it in a Hawker Horsley for test purposes.[2]

Interest in diesel engines in the postwar period was sporadic. The lower power-to-weight ratio of diesels, particularly compared to turboprop engines, weighed against the diesel engine. With fuel available cheaply and most research interest in turboprops and jets for high-speed airliners, diesel-powered aircraft virtually disappeared. The near-death of the general aviation market in the 1990s saw a massive decline in the development of any new aircraft engine types.

Napier & Son in Britain had developed the Napier Culverin, a derivative of the Junkers Jumo 205, before World War II, and took up aero diesel engines again in the 1950s. The British Air Ministry supported the development of the 3,000 hp (2,200 kW) Napier Nomad, a combination of piston and turboprop engines, which was exceptionally efficient in terms of brake specific fuel consumption, but judged too bulky and complex and canceled in 1955.

Certified diesel-powered light planes are currently available, and a number of companies are developing new engine and aircraft designs for the purpose. Many of these run on readily available jet fuel (kerosene), or on conventional automotive diesel. 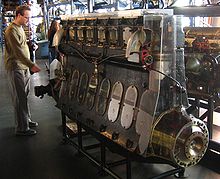 The zeppelins LZ 129 Hindenburg and LZ 130 Graf Zeppelin II were propelled by reversible diesel engines. The direction of operation was changed by shifting gears on the camshaft. From full power forward, the engines could be brought to a stop, changed over, and brought to full power in reverse in less than 60 seconds.

Nevil Shute Norway wrote that the demonstration flight of the airship R100 was changed from India to Canada, when she got petrol engines, because it was thought that a flight to the tropics with petrol on board would be too hazardous. It is curious after over twenty years to recall how afraid everyone was of petrol in those days (c. 1929), because since then aeroplanes with petrol engines have done innumerable hours of flying in the tropics, and they don’t burst into flames on every flight. I think the truth is that everyone was diesel-minded in those days; it seemed as if the diesel engine for aeroplanes was only just around the corner, with the promise of great fuel economy.[3]

Hence, the ill-fated diesel-engined R101 — which crashed in 1930 — was to fly to India, though her diesel engines had petrol starter engines, and there had only been time to replace one with a diesel starter engine.[4] The R101 used the Beardmore Tornado aero diesel engine, with two of the five engines reversible by an adjustment to the camshaft. This engine was developed from an engine used in railcars.

The first manufacturer to produce a certified design for the general aviation market was Thielert, located in the small town of Lichtenstein in the German state of Saxony. They produce four-stroke, liquid-cooled, geared, turbo-diesel aircraft engines based on Mercedes automotive designs which will run on both diesel and jet aviation fuel (Jet A-1). Their first engine, a 1.7 litres (100 cu in), 135 hp (101 kW) four-cylinder (based on the 1.7 turbo diesel Mercedes A-class power unit), was first certified in 2002. It is certified for retrofitting to Cessna 172s and Piper Cherokees which were originally equipped with the 160 hp (120 kW) Lycoming O-320 320 cubic inches (5.2 l) Avgas engine. Although the weight of the 135 hp (101 kW) Thielert Centurion 1.7 at around 136 kilograms (300 lb) is similar to that of the 160 hp (120 kW) Lycoming O-320, its displacement is less than a third of that of the Lycoming. It however achieves maximum power at 2300 prop rpm (3900 crank rpm) as opposed to 2700 for the petrol Lycoming.

Thielert users included Austrian aircraft firm Diamond Aircraft Industries, which offered its single-engine Diamond DA40-TDI Star with a Thielert Centurion 1.7' engine, and also the DA42 formerly known as Twin Star with two. The twin-Thielert engined DA42 offered low fuel consumption with a high fuel efficiency of 15.1 l/h. Several hundred Thielert-powered airplanes are flying. There was also a certified a 4.0-litre, V8, 310 hp (230 kW) version available from 2005 although this engine has not been certified for instillation in any airframes. Apex aircraft, formerly Robin, also offered an aircraft (Ecoflyer) with the Thielert engine.

In May 2008, Thielert went bankrupt. Although Bruno M. Kubler, Thielert's insolvency administrator, was able to announce in January 2009 that the company was "in the black and working to capacity," by then Cessna had dropped plans to install Thielert engines in some models, and Diamond Aircraft has now developed its own in-house diesel engine.

SMA Engines, located in Bourges, 150 km south of Paris have designed a four-stroke, air-cooled, turbo-diesel aircraft engine from the ground up, the SR305-230. SMA's engineering team came from Renault Sport (Formula 1). The 230 hp (170 kW), 305 cubic inch (5.0 liter) jet fuel engine first obtained European certification in April 2001, followed by US FAA certification in July 2002. It is now certified as retrofit on several Cessna 182 models in Europe and the USA, and Maule is working toward certification of the M-9-230.

Interest in diesel aircraft in the United States has been more limited, due to its lower fuel taxes. However, doubt about the future availability of avgas has raised awareness of diesel alternatives. In March 2008 the Indus Aviation team led by Aldo Sibi (Director Of Production- Chief Mechanic – Head of Research and Development) prototyped the world's first diesel powered Light Sport Aircraft, N211GD. This airplane was built and flown in 30 days. This novel aircraft, although a prototype, sparked huge interest in alternative fuels in the industry. Mr. Sibi and his team also championed no less than 70 modifications and improvements. After the diesel project Mr. Sibi and his team took Indus to the next level developing the Primary Trainer. This was an attractive low cost trainer that competed very well with the high-end imports from overseas.

A number of other manufacturers are currently developing experimental diesel engines, many using aircraft-specific designs rather than adapted automotive engines. Many are using two-stroke designs, with some opposed-piston layouts directly inspired by the original Junkers design.[5] Examples include:

Diesel Air Limited, Wilksch and Zoche have all had considerable problems bringing their prototype designs into production, with delays running into several years. The Diesel Air Limited-powered airship is no longer registered by the Civil Aviation Authority in the UK.