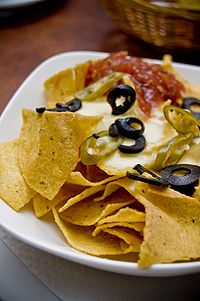 Nachos are a popular corn based food of Mexican origin associated with Tex-Mex cuisine that can be either made quickly to serve as a snack or prepared with more ingredients to make a full meal. In their simplest form, nachos are tortilla chips or totopos covered in melted cheese. First created circa 1943 by Ignacio "Nacho" Anaya, the original nachos consisted of fried corn tortillas covered with melted cheddar cheese and pickled jalapeño peppers.

International Day of the Nacho

The International Day of the Nacho takes place every October 21. It was initiated in the 1990s in the United States and Mexico to commemorate the invention of nachos by Ignacio "Nacho" Anaya in 1943 at El Moderno restaurant in the border town of Piedras Negras, Coahuila.

The International Nacho Festival is held on between October 13 and 15 at Piedras Negras.[1] 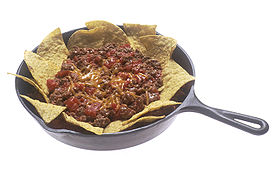 Nachos with beef, beans and cheese

A variation consists of a quartered and fried tostada topped with a layer of refried beans and/or various meats and a layer of shredded cheese.

Nachos with an abundance of toppings are sometimes called "loaded nachos" or "super nachos". This type of dish is usually served as an appetizer at bars or restaurants in the United States and generally tend to be as sizable as a meal. The dish is normally prepared in this manner: The tortilla chips are arranged on a platter, meat and refried bean toppings are then added, and the entire platter is smothered with shredded cheese. The platter is then put into a broiler or microwave to allow the cheese to melt. The platter is then covered with the cold toppings (shredded lettuce, tomatoes, salsa, jalapeños, etc.) and served immediately.

In Memphis, Tennessee, barbecue nachos are served in most barbecue restaurants, and also at sporting events. Generous portions of barbecued pork shoulder are placed atop tortilla chips, then covered with melted cheese, barbecue sauce, and sliced jalapeño peppers.

In Hawaii, kalua pork nachos are served in many restaurants and bars. Generous portions of kalua pork are placed atop tortilla chips, the covered with melted cheese, and varied toppings.

A similar dish that involves tortilla chips and cheese is found in Tex-Mex restaurants. Small bowls of chili con queso and/or, more commonly, salsa, are served with baskets of warm tortilla chips as appetizers. 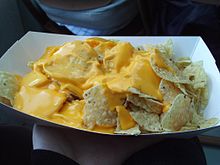 A form of processed cheese in the style of Chili con queso; mixed with peppers and other spices is often used in place of freshly shredded cheese in institutional or large-scale production settings, such as schools, movie theaters, sports venues, and convenience stores, or wherever using freshly grated cheese may be logistically prohibitive. Such processed cheese is referred to in the United States as "nacho cheese", and alternatively "queso cheese" or "stadium cheese" or "pump cheese". Though originally formulated as a cheaper and more convenient source of cheese to top nachos, this dip has become popular enough in the U.S. that it is available in some Mexican-themed restaurants, and at major grocery stores, in both name-brand (Ricos Products, Frito-Lay, Tostitos, and Taco Bell) and off-brand versions.[2] Unlike many European cheeses, "nacho cheese" bears no geographical indication or other regulated guarantee of ingredients, process, or quality, beyond the general legal definition for cheese products as established by the U.S. Food & Drug Administration.

1.^ Anaya's son, Ignacio Anaya, Jr., is quoted as saying "My father was maître d' and he said 'Let me go quick and fix something for you.' He went into the kitchen, picked up tostados,' grated some cheese on them—Wisconsin cheese, the round one—and put them under the Salamander (a broiling unit that browns the top of foods). He pulled them out after a couple minutes, all melted, and put on a slice of jalapeño."[3]