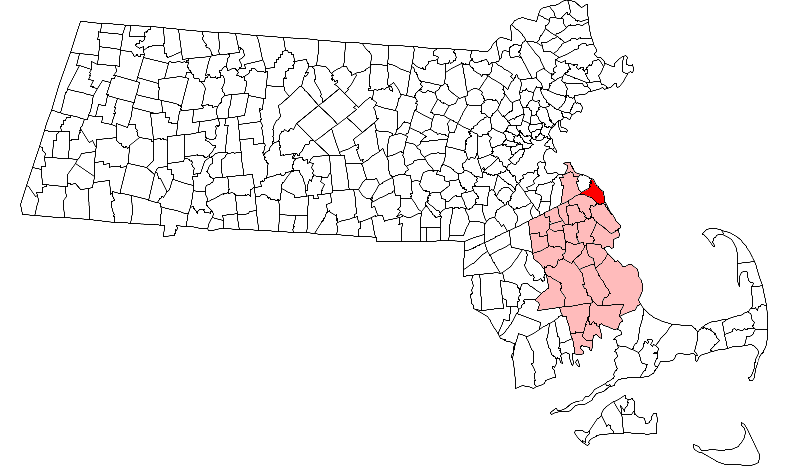 Scituate is a small seacoast town in Plymouth County, , , on midway between Boston and Plymouth. The population was 17,863 at the 2000 census.

For geographic and demographic information on the village of North Scituate, which is a part of Scituate, please see the article .

Scituate was settled by a group of people from Plymouth about 1627, who were joined by immigrants from the County of in England. They were initially governed by the General Court at Plymouth, but in 1636 the town incorporated as a separate entity. The name Scituate is derived from "satuit," the term for cold brook. It refers to a brook that runs to the inner harbor of Scituate. In 1710 several residents emigrated to Rhode Island and founded , naming it after their previous hometown.

In 1717 the western portion of the original grant was separated and incorporated as the town of Hanover, and in 1788 a section of the town was ceded to Marshfield. In 1849 another western section became the town of South Scituate, which later changed its name to Norwell. Since then, the borders have remained essentially unchanged.

was a significant part of the local economy in the past, as well as the sea mossing industry. A small fishing fleet is still resident in Scituate Harbor, although today the town is mostly residential.

In 1810, a lighthouse was erected on the northern edge of Scituate Harbor. This lighthouse is now known as . During the , a British naval raiding party was deterred by the two daughters of the lighthouse keeper playing a fife and drum loudly. The girls and this incident became known as the "" or "Lighthouse Army of Two".

Another lighthouse, the notable , is located approximately one mile off Scituate Neck.

's Old Oaken Bucket house is located in Scituate. The town is also home to the Lawson Tower, a water tower surrounded by a wooden façade, with an observation deck with views of most of the South Shore from the top.

Scituate used to be the site of station , which broadcast on the bands in the late 1960s.

Scituate is considered a South Shore community, located just south of the mouth of greater . The town is not contiguous; is a part of Scituate which can only be reached from Marshfield. The latter was formerly connected to the town, but that connection was lost with a river shift as the result of the of 1898. The town's shore varies, with the south (along the mouth of the North River) being marshy, the middle (around Scituate Harbor) being more bucolic, to the rocky coast of Scituate Neck (Minot) in the north. It is off these rocks that Minot's Ledge lies, home to the town's most famous lighthouse. The inland of the town is mostly wooded, with several brooks and rivers (including Cold Brook, for which the town is named) running through.

The town has no freeways running through it; Route 3 runs through neighboring Norwell. Route 3A runs through the town, and is known as Chief Justice Cushing Highway for this stretch, named for Chief Justice (1732–1810). The only other state highway in town is Route 123, which terminates at Route 3A, just 0.7 miles from the town line.

There is no air service in town; the closest regional airport is Marshfield Municipal Airport, and the closest national and international air service is at in Boston. There are two commuter rail stations. One being just off Route 3A in North Scituate, and the other just east of the intersection of Routes 3A and 123 in the Greenbush neighborhood, which is the line's eastern terminus. The line is connected to an existing line in Braintree, providing service to South Station in Boston. [ [http://www.cbbgreenbush.com/ MBTA CBB Greenbush Construction Project website] ]

Named places in the town include:

There were 6,694 households out of which 34.4% had children under the age of 18 living with them, 62.5% were married couples living together, 8.2% had a female householder with no husband present, and 26.5% were non-families. 22.2% of all households were made up of individuals and 10.4% had someone living alone who was 65 years of age or older. The average household size was 2.64 and the average family size was 3.13.

There are no divided highways that run through Scituate, however, there are two state roads, Route 3A and Route 123. The nearest airport to Scituate is Marshfield Municipal Airport. The nearest national and international air service can be reached at in Boston. , located outside , is an alternative to this airport, although it is located further away.

The of the begins in Scituate with the Greenbush station, proceeds north to Scituate's second stop, in North Scituate, where it continues to Cohasset and Hingham and finally in Boston.

On the state level, Scituate is mostly represented in the as a part of the Fourth Plymouth district, which also includes the town of Marshfield. The third precinct is a part of the Third Plymouth district, which includes Hingham, Hull and Cohasset. The town is represented in the as a part of the Plymouth and Norfolk district, which includes the towns of Cohasset, Duxbury, Hingham, Hull, Marshfield Norwell and Weymouth. [ [http://www.mass.gov/legis/citytown.htm Index of Legislative Representation by City and Town, from Mass.gov] ] The town is patrolled by the First (Norwell) Barracks of Troop D of the . [ [http://www.mass.gov/?pageID=eopsterminal&L=5&L0=Home&L1=Law+Enforcement+%26+Criminal+Justice&L2=Law+Enforcement&L3=State+Police+Troops&L4=Troop+D&sid=Eeops&b=terminalcontent&f=msp_divisions_field_services_troops_troop_d_msp_field_troop_d_station_d1&csid=Eeops Station D-1, SP Norwell] ]

Scituate is governed on the local level by the form of government, and is led by a town administrator and a . The town hall, police and fire station 3 are all located in buildings along Route 3A, just down the street from the traditional center of town. There is also a firehouse in Humarock and the Fire Headquarters is on First Parish Rd near Scituate Harbor. Emergency services are also provided by the town, with the nearest hospitals being located in Quincy, Weymouth, Plymouth, and Brockton. There are four post offices throughout the town, located in Humarock, near the harbor and the neck, and in North Scituate, just off the right-of-way of the Greenbush line and adjacent to the site of the station. The Scituate Town Library is located near Scituate Center, and is a member of the Old Colony Library Network (OCLN). The town also operates a highway department, as well as several parks, beaches and marinas. The Coast Guard also has a station at Scituate Harbor, just opposite First Cliff.

High school students may also choose to attend in Hanover free of charge. Also, many students, specifically in high school, commute to private schools in and around Boston, most commonly, and Archbishop Williams in Braintree, (boys only) in Dorchester, and Notre Dame Academy (girls only) in Hingham. B.C. High enrolled 61 young men from Scituate in the 2005–2006 school year.

* , weatherman for News Channel
* Rebecca and Abigail Bates, known as the "," fended off the British army near the Scituate lighthouse with a fife and drum during the War of 1812
* , former Massachusetts treasurer
* , (2007–)
* , author of several novels, including "Must Love Dogs", which was adapted as a 2005 feature film starring John Cusack and Diane Lane
* , one of the original six justices on the .
* , former Harvard hockey captain with a 13-year NHL career, who won an NCAA championship; played in the Olympics
* , artist, illustrator, known for Red Sox yearbook covers and paintings of small town American childhood in the 1950s and 1960s.
* , a writer and poet whose autobiographical "Another Bullshit Night in Suck City" currently has director Paul Weitz attached to adapt into a film
* , journalist, author, who died in the sinking of the Titanic in 1912
* , actor known for his role as "Major Don West" in the series ""
* , NHL forward for the 2007 Stanley Cup Champions
* , former NFL football player for Baltimore Colts, 1972–1981 (Pro Bowl 1972), and , 1982–1983
* Thomas W. Lawson, stock promoter, financial reformer, built his Dreamwold estate nearby
* , -winning former Major League Baseball starting pitcher for the Boston Red Sox.
* , former NHL forward known for being a member of the 1980 U.S. Olympic hockey team that won the gold medal
* , former NHL player, , , , [ [http://www.boston.com/sports/hockey/bruins/articles/2006/09/09/tibbetts_to_get_his_shot/ Boston Globe, "Tibbets to Get His Shot"] ]
* , writer, director [ [http://movies.yahoo.com/movie/contributor/1800020242/bio Yahoo Movies on Tolan] ]
* , NHL defenseman for the
* , Two-time winning Journalist, and editor of the Boston Globe Spotlight Team; His first reported the Catholic Church Molestation Scandal in 2003