Hsing Yun (Chinese: 星雲大師; pinyin: Xīngyún Dàshī; born August 30, 1927) is a well-known Buddhist monk, as well as an important figure in modern reformation of Mahayana Buddhism in Taiwan and China. Hsing Yun is the founder of the Fo Guang Shan Buddhist order and the affiliated Buddha's Light International Association, one of the largest international Buddhist organizations in the world. Hsing Yun is a forty-eighth generation lineage holder of the Linji Chan (Rinzai Zen) school through Master Zhi Kai, his teacher. He served as the first, second and third term director and abbot of the order before voluntarily resigning his position in 1985 in favor of his disciple, Hsin Ping.[1]

Hsing Yun is known for his "Humanistic Buddhism" philosophy employed by the Fo Guang Shan order,[2] which utilizes Buddhism to fit the needs of a modern world. He is credited by Buddhist scholars as one of the forefront leaders in modern reformation of Buddhism[3][4][5] by opening monasteries, universities and schools around the world, as well as engaging in religious dialogue amongst other Buddhist sects and religious faiths.

In Taiwan, Hsing Yun is also notable for his activity in politics, particularly on the One China Policy as well as government legislation, and is often criticized for his views by those in favor of Taiwanese independence, political pundits and conservative Buddhists and religious figures. He was a figure of interest during the 1996 United States finance scandal involving then-U.S. Vice President Al Gore and a visit to Hsi Lai Temple, the U.S. branch of Hsing Yun's organization.[6][7]

Hsing Yun was born on the 22nd day of the seventh lunar month (August 30 in Western standards), 1927 in Jiangsu province in China under the name Li Guoshen (李國深). He was the third of four children, with an older brother, an older sister, and a younger brother. His father left home to do business and was never heard from again. When his mother, who was a faithful Buddhist herself, was desperately searching for her husband, he went to Nanjing. By chance, he came across a monk at Qixia Monastery. The host monastic asked young Li if he wanted to become a monastic, to which Li immediately answered "yes". At that time during Li's childhood, a civil war was ensuing and living conditions were harsh, which may have been a cursor for Li's tonsure at a young age.[2] The host monastic requested that Li could be tonsured under Zhi Kai, the abbot of the monastery, therefore, Zhi Kai would be his master. At the age of twelve, young Li was tonsured. He was ordained under two dharma names, one to be used publicly and another for lineage purposes; Jinjue (今覺, to be enlightened today), and Wuche (悟徹, thorough realization of enlightenment).

In 1941, Jinjue was fully ordained and went on to formal monastic training at Qixia Vinaya School and transferred to Chiao-Shan Buddhist College in 1945. One day, when Jinjue was still a student at Jiao-Shan Buddhist College, he happened to stumble onto the word "Nebula" in the dictionary, read as Xīngyún in Chinese. Jinjue admired the infiniteness and boundlessness of these nebulas and wished that he could shed light on darkness and be as free and unbound as clouds and stars. Out of necessity and for safety issues, when Jinjue needed a new identification card after China's victory over Japan, he gave himself the dharma name of Hsing Yun (spelled in Wade Giles pinyin).

He left the college at the age of twenty to become a principal at an elementary school in Yixing, a small town not far from Nanjing, where he learned about administration and interpersonal coordination skills. As mainland China was enmeshed in civil war, he left his home in 1949 to head for Taiwan. He began to propagate Dharma around the age of 31 to 40 at Ilan, thus beginning his writing career. In 1949, Hsing Yun wrote his first book, "Singing in Silence", the first stepping stone in his writing career. In later years, he founded several Buddhist publications, was promoted as editor-in-chief for many Buddhist periodicals and newsletters for various temples, wrote articles for major Taiwanese newsletters, and composed scripts for radio broadcast stations. In 1955, he published one of the first hardback biographies of the Buddha. Sometime later during the Cultural Revolution, his master Zhi Kai was killed. After his success in founding Fo Guang Shan, Hsing Yun would return to the Mainland in the 1980s to help fund for the college and monastery where he studied that was nearly destroyed from the revolution.

In the 1950s, Hsing Yun taught numerous classes, built many schools for children, recorded the first Buddhist hymns, and was promoted as an executive in many Buddhist associations. In 1957, Hsing Yun established a Buddhist cultural center in which a variety of Buddhist books are published with training tools such as audio and visual aids. In 1959, Hsing Yun also supported the Tibetan movement against communist suppression, and organized the first float parade in celebration of Wesak in Taiwan.

Hsing Yun was one of eight venerables who proposed the semiannual World Buddhist Forum in China in 2004, a suggestion that won support from Buddhist circles in countries like Japan and the Republic of Korea.

In 1997, Hsing Yun was invited to a Cross-century Religious Dialogue with Pope John Paul II. Under the invitation of the Roman Catholic Church at the Vatican, Hsing Yun met with the Pope to promote inter-religious exchange between the two parties and to pray for world peace. On June 21, 2006, Hsing Yun met John Paul II's successor, Pope Benedict XVI, in a general audience at St. Peter's Basilica. During the meeting, Benedict XVI expressed his best regards for the Taiwanese and said he will pray for them. The Pope also expressed the hope of meeting the Taiwanese people. 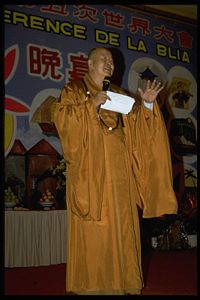 Hsing Yun gives a Dharma talk at a BLIA conference; circa 1994

In 1967, Hsing Yun purchased more than 30 hectares in Ta Shu Township, Kaohsiung County as the site for the construction of a monastery. The groundbreaking ceremony was held on May 16. He began by building the colleges and their dormitories, and working slowly towards building the shrines.

Beginning in 1967, Hsing Yun served as the abbot of Fo Guang Shan for the first three terms, working to promote Humanistic Buddhism. Master Hsing Yun announced his abdication on September 22, 1985. He handed not only the abbotship, but also gave dharma transmission to his most senior disciple, Hsin Ping.

In May 1997, Master Hsing Yun announced that he would close the mountain gate of Fo Guang Shan to the general public, in part of his wish for himself and his disciples (lay and monastic) the cloistered atmosphere they need for their Buddhist practice. In Chinese Buddhism, it is common for most mountain monasteries to remain in retreat periodically for months, and sometimes years. At the end of 2000, ROC President Chen Shui-bian and government officials from Kaohsiung visited Fo Guang Shan bringing with them the wish from their constituents that Fo Guang Shan reopen its gates. Fo Guang Shan acceded and partially reopened the monastery a year later.

Hsing Yun has openly involved himself with Taiwanese and Chinese politics, and is a prominent supporter of the One China policy. For example, in 2009 Hsing Yun exclaimed that there are "no Taiwanese" and that Taiwanese "are Chinese."[8] during the second World Buddhist Forum. He has also encouraged reconciliation between China and the Dalai Lama.[9]