Here Comes the Night (Them song)

Here Comes the Night (Them song) 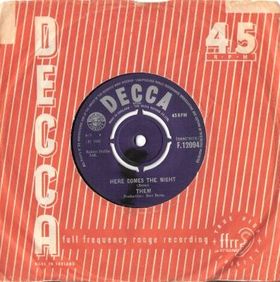 This was the second Them record produced by Bert Berns and the first that he had written for Them. Despite a bold, breezy tone, it was a tale of obsessive jealousy and approaching loneliness from the point of view of a rejected lover who voyeuristically watches the new couple.
played guitar on this arrangement. Andy White and Tommy Scott performed backing vocals with on . Coulter later said, "I knew I'd heard a smash. It was the first time I'd ever heard a hit record in its emerging state." [Rogan, No Surrender, p 111-112]

"Here Comes The Night" was Them's third single, released following the success of "Gloria". The first day of its release it sold 16,000 copies, at the time an impressive showing. [Rogan, No Surrender, p112] It peaked at #2 UK and #24 US, spending 10 weeks on the U.S. chart. It was also released on the EP "Mystic Eyes". After the record was released, Them immediately was sent on a push with television appearances on "" and "".

Van Morrison has remarked on this: [Rogan, No Surrender, p 112]

Them were never meant to be on "Top of the Pops", I mean miming? Lip syncing? We used to laugh at the programme, think it was a joke. Then we were on it ourselves. It was ridiculous. We were totally anti that type of thing. We were really into the blues...and we had to get into suits and have make-up put on and all that..

It was released on the Parrot (US) version of the album "THEM" in July 1965, and also appears on the album, "The Story of Them".

Appearance on other Van Morrison albums