Not to be confused with Australian-born British actress Nancy O'Neil

O'Neil was born in Oakland, California as Gertrude Lamson to George Lamson and Arre Findley.[1] When she decided to become an actress, her religious father, an auctioneer, denounced his daughter in church for going on the stage and asked the congregation to pray for her.

An unidentified critic in The New York Times wrote of O'Neil's talents in 1908, stressing the positives of her performances while warning of the actress' drawbacks. "There is no actress on the stage at present who has a more remarkable gift for emotional expression, nor is there a single one who has been more lavishly endowed by nature with the physical gifts which enter into the equipment of great actresses", he wrote. "Miss O'Neil has a kind of massive beauty, and she is not without much natural grace. Her voice is a splendid organ, rich and deep, with plenty of color and sweetness. There are moments when it is expressive of deep feeling. But there are more extended periods when it is pitched in monotonous cadences, during which the actress speaks seem to be delivered without a hint of genuine feeling or understanding, when, in short, she is simply an actress giving voice to words that she has conned and learned by rote and delivered in a sort of phonographic manner without a suggestion of the thought behind them".[2] 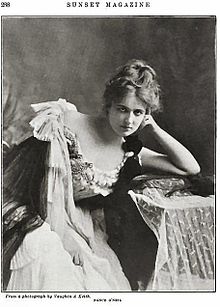 Early in her acting career, O'Neil was managed by McKee Rankin, an actor, manager, and producer who made her a star in Australia and oversaw her London debut in 1902 in the play Magda, in which she was described as "intense, imperious and unequal".[3] (In 1899, Rankin and O'Neil were rumored to have married but the announcement was declared incorrect.) In her role as the title character in the 1906 adaptation of Leah, the Forsaken, she recreated the role made famous by Italian actress Adelaide Ristori. Her performances in Leah (an adaptation of a translation of Salomon Hermann von Mosenthal's Deborah) were described as 'genius' by Fremont Older. She also appeared in Trilby, Camille, The Common Standard, The Wanderer, Macbeth, Agnes, Sappho, The Passion Flower, Hedda Gabler, and many other productions in the United States and Europe.

The statuesque (nearly six-foot) O'Neil performed in Louisville, Kentucky with actors such as Wilton Lackaye, Edmund Breese, William Faversham, Tom Wise and Harriet E. MacGibbon. There were regular productions, including Ned McCobb's Daughter, The Front Page, The Big Fight, and a "transcontinental tour" of The Big Fight, which began in Boston, took in New Haven and Hartford, and ended at Caine's storehouse. Jack Dempsey was also in the cast. O'Neil also acted in plays by both Shakespeare and Ibsen in Boston in the late 1920s. On November 29, 1922, she was featured at the opening night of the Columbia Theatre in Sharon, Pennsylvania.

For a period in the early 1900s O'Neil owned her own acting company, in which Lionel Barrymore came to early public notice.

In Hollywood, O'Neil began by working in silent movies, including The Kreutzer Sonata (1915). She successfully made the transition to sound films, appearing in movies such as Ladies of Leisure, Royal Bed, and The Rogue Song (all in 1930), Cimarron and Transgression in 1931, and False Faces (1932), which proved to be her final film.

In 1904, O'Neil met Lizzie Borden in Boston. The two had an close friendship, but it may have been purely Platonic in nature.[4] Writer John Corrado notes the belief that Lizzie Borden was a lesbian basically comes down to the assumption that any woman not married by thirty must be gay.[5]

O'Neil was a character in the musical Lizzie Borden: A Musical Tragedy in Two Axe, where she was played by Suellen Vance. The women's friendship also was explored in the 2010 play Nance O'Neil by David Foley.[6]

In 1916 O'Neil married Alfred Hickman (né Alfred Scott Devereaux-Hickman), a British-born film actor who was previously married to actress Blanche Walsh. He died in 1931. Hickman and O'Neil costarred as Nicholas and Alexandra in the silent film The Fall of the Romanovs (1917).

Nance O'Neil was a resident of the Actors' Fund home in Englewood, New Jersey and died there on February 7, 1965. She was buried in Forest Lawn Memorial Park, Glendale, California in the Columbarium of the Sanctuaries, Niche #10022.[7]