The Kola Superdeep Borehole (Russian: Кольская сверхглубокая скважина) is the result of a scientific drilling project of the Soviet Union in Kola Peninsula. The project attempted to drill as deep as possible into the Earth's crust. Drilling began on 24 May 1970 using the Uralmash-4E, and later the Uralmash-15000 series drilling rig. A number of boreholes were drilled by branching from a central hole. The deepest, SG-3, reached 12,262 metres (40,230 ft) in 1989, and is the deepest hole ever drilled, and the deepest artificial point on earth.[1] For two decades it was also the world's longest borehole, in terms of measured depth along the well bore, until surpassed in 2008 by 12,289 m (40,318 ft) long Al Shaheen oil well in Qatar, and in 2011 by 12,345 metres (40,502 ft) long Sakhalin-I Odoptu OP-11 Well (offshore the Russian island Sakhalin).[2]

The Kola borehole penetrated about a third of the way through the Baltic continental crust, estimated to be around 35 kilometres (22 mi) deep, reaching rocks of Archaean age (greater than 2.5 billion years old) at the bottom.[7] The project has been a site of extensive geophysical studies. The stated areas of study were the deep structure of the Baltic Shield; seismic discontinuities and the thermal regime in the Earth's crust; the physical and chemical composition of the deep crust and the transition from upper to lower crust; lithospheric geophysics; and to create and develop technologies for deep geophysical study.

To scientists, one of the more fascinating findings to emerge from this well is that the change in seismic velocities was not found at a boundary marking Harold Jeffreys's hypothetical transition from granite to basalt; it was at the bottom of a layer of metamorphic rock that extended from about 5 to 10 kilometers beneath the surface. The rock there had been thoroughly fractured and was saturated with water, which was surprising. This water, unlike surface water, must have come from deep-crust minerals and had been unable to reach the surface because of a layer of impermeable rock.[8]

Another unexpected discovery was the large quantity of hydrogen gas, with the mud flowing out of the hole described as "boiling" with hydrogen.[9] 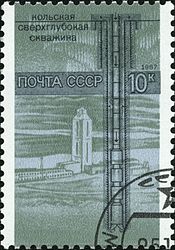 The site is controlled by the State Scientific Enterprise on Superdeep Drilling and Complex Investigations in the Earth's Interior (GNPP Nedra) as the Deep Geolaboratory. As of 2003[update], the deepest active bore, SG-5, is 8,578 m (28,143 ft) and with a 214 mm (8.4 in) diameter.[citation needed]

The project was closed down in late 2005 due to lack of funding. All the drilling and research equipment was scrapped and the site has been abandoned since 2008.[10]

The United States had embarked on a similar project in 1957, dubbed Project Mohole, which was intended to penetrate the shallow crust under the Pacific Ocean off Mexico. However, after some initial drilling, the project was abandoned in 1966 due to lack of funding. This failure inspired great successes of the Deep Sea Drilling Project, Ocean Drilling Program, and the present Integrated Ocean Drilling Program. The KTB superdeep borehole (German Continental Deep Drilling Program, 1990–1994) was drilled down to a depth of 9101 m (29,859 ft) reaching temperatures of more than 260° Celsius. The ambitious measuring program had to develop high temperature tools like a magnetometer tool.

The deep core-drilled Kola borehole cannot be directly compared with any other borehole in the world. In a deep core borehole, a section of the rock drilled through is recovered from within the hole. It is this recovered drill core, and the information it represents about the rock that it was retrieved from, that is the most important feature of the borehole.

On January 28, 2011, Exxon Neftegas Ltd., operator of the Sakhalin-I project, drilled the world’s longest extended-reach well offshore on the Russian island of Sakhalin. It has surpassed the length of both the Al Shaheen well and the Kola borehole. The Odoptu OP-11 well reached a measured total depth of 12,345 m (40,502 ft) and a horizontal displacement of 11,475 m (37,648 ft). Exxon Neftegas completed the well in 60 days.[2]

However, in terms of depth below the surface, the Kola Superdeep Borehole still retains the world record as of 2011.