The O'Reilly Factor, originally titled The O'Reilly Report from 1996 to 1998[1] and often called The Factor, is an American talk show on the Fox News Channel hosted by commentator Bill O'Reilly, who often discusses current controversial political issues with guests.

An example of The O'Reilly Factor's Talking Points Memo

The O'Reilly Factor is usually prerecorded, though it is occasionally aired live if breaking news or special events are being covered. It is usually taped between 5:00 and 7:00 PM Eastern Standard Time and airs weekdays at 8:00 PM, 11:00 PM, and 5:00 AM EST. Some guests are interviewed before the "live to tape" period and are slotted in the program as appropriate.[6]

O'Reilly and his producers discuss potential topics twice a week.[7] A producer will research the story and book guests for O'Reilly, and an information packet will be produced with possible angles for O'Reilly to explore. The producers will often "pre-interview" the guest so that they know what potential points he or she might make.[8] For each show, O'Reilly, with the assistance of his staff, will produce a script with the words for the "Talking Points Memo" and "Pinheads and Patriots" segments, and points of discussion and questions for the guests that will appear on the program. On February 2, 2009 the show launched in high definition and moved to the previous studio used by the Fox Report.

The show is divided into titled segments, appearing in the following general order. Not all segments appear in all programs, and occasionally segments will repeat. 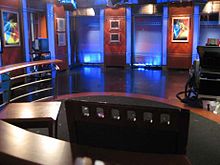 The stage previously used as the set of The O'Reilly Factor.

O'Reilly's first guest was General Barry McCaffrey, then the Director of the Office of National Drug Control Policy (or "Drug Czar"). Over the years, many other well-known political figures and celebrities have appeared regularly on the show.

Both interviews drew significant media attention as they were front runners for the 2008 presidential election.

The 2008 Republican candidate for Vice President, Sarah Palin, and then Democratic Vice President candidate Joe Biden were also invited to the show, but chose not to make an appearance.[18]

The O'Reilly Factor has also been spoofed on Saturday Night Live, first by Jeff Richards and later on by Darrell Hammond. On MADtv it was Michael McDonald doing the honors. O'Reilly himself has appeared on MADtv.[22] Richards also played O'Reilly in an episode of Mind of Mencia where O'Reilly is a senator in the year 2016.

The show was also spoofed by the TV series The Boondocks; first in the episode "The Trial of R. Kelly" where O'Reilly is shown talking about R. Kelly's latest legal trouble. Later in "Return of the King", O'Reilly is shown attacking Martin Luther King for saying that America should "love thy enemy" and "turn the other cheek", even in respects to the 9/11 attacks. O'Reilly accuses him of hating America and tells him to "Take another 40 year nap, Commie bastard."

The Political Machine features a skit called "The O'Malley Factor" ("A show you appear on while running for president").

In Arrested Development, the failed Bluth company frequently features on The Most Ridiculous Item of the Day segment.

CNNNN, an Australian comedy show which satirized cable news, featured a recurring segment entitled The Firth Factor. These segments typically showed Charles Firth, a member of the Chaser comedy team, presenting his opinion on topical issues, often through use of over-the-top comparisons (such as dipping a paper heart in a can of black paint and claiming: "This is how black Saddam Hussein's heart is") and outrageous statements in a parody of O'Reilly and Australian current affairs personalities. The Chaser's War on Everything also featured a segment in its second season where it poked fun at the O'Reilly factor.

In 2008 Talkshow with Spike Feresten has begun parodying O'Reilly with a series of videos entitled "Lil Bill O'Reilly", using a child as O'Reilly. The original video has become widespread throughout the Internet.

In the 2010 film Iron Man 2, O'Reilly is shown on The O'Reilly Factor criticizing Tony Stark's decision to promote Pepper Potts to be the CEO of his company.[23]

In 2011 he also makes a cameo appearance in the film Transformers: Dark of the Moon.[24]