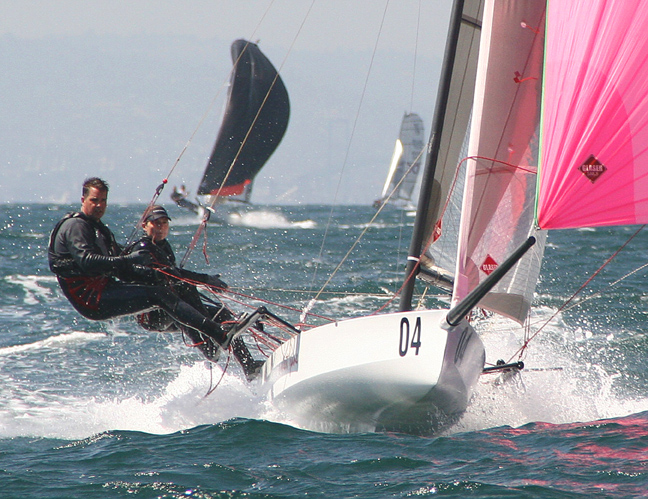 The International 14 is 14-foot double-handed dinghy. The class originated in in the early part of the 20th century. It is sailed and raced in many countries around the world and was one of the very first true international racing dinghy classes. It is a being controlled by a set of rules that allow for innovation and changes in hull and rig design as long as they fall within a set of specific limitations such as length, weight, beam, and sail area. The class has permitted its rules to be revised at various times in its history in order to keep the class at the forefront of dinghy racing development and can now best be described as an ultralight dual-trapeze with large area. It is often raced with boats of similar design in , or non-handicap races.

There are essentially four periods in the class' history:

1. Displacement style, or the "Before Era;" 2. Planing, which started with Uffa Fox and his deep-chested hulls, (boats named AVENGER, and ALARM were quintessential examples) which were broad aft with nearly straight buttocks, and narrow forward with a deep vee; another notable boat was WINDSPRITE, designed and built in cold-moulded plywood by Austin Farrar at Woolverstone, Suffolk, in the early 1950s, whose distinctive hull shape was emulated later in the dinghy;

3. Trapeze planing, which came about decades later, when the trapeze was finally legalized in the class (it had been tried by Uffa and others in the 1930s but was banned); during this evolutionary period larger ballast tanks were permitted by the class rules that greatly improved the ability of crews to recover from capsizes; the period also saw the introduction of multi-chined boats that were radically different in hull shape from the earlier carvel-built and molded-plywood designs;

4. Double-trapeze super-planing, which has gone through a number of evolutions. The concept was developed in Australia and New Zealand, and influenced the design of the high-powered but lightweight Australian 18. This form of the boat really started to take form in the early 80's (but with only one trapeze) as the minimum weight was lowered and upwind planing became possible.

Contemporary boats weigh as little as 165 lb, and have as typical equipment a retractable spinnaker pole, unlimited asymmetric size, 200sq ft and area, a fully battened mainsail, an adjustable carbon rig, and a that allows the boat to be trimmed fore and aft for different conditions.

Since this is a development class, older boats have been obsoleted through rules changes. Many of the older boats still race in fleets of similar boats. Penultimates, also known as 'Pennies' are boats that feature much of the same technology as modern boats but are from prior to the 1996 merger between the International 14 and Aussie 14 classes. Classic boats are boats prior to 1984 and feature a symmetric spinnaker, single trapeze, and many feature cold molded wooden hulls.